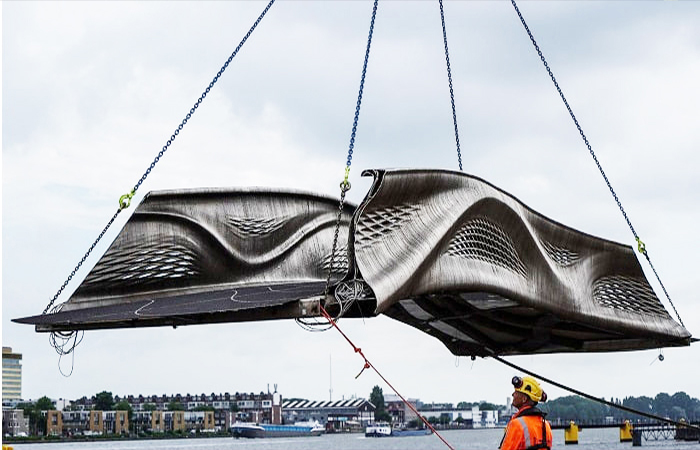 The first 3D printed steel bridge in the world – an innovative project headed by Dutch company MX3D, opened to the public in Amsterdam. The novel landmark spans one of the city’s oldest canals and sits in the center of the red-light district.

The 40-foot-long bridge doubles as a ‘living laboratory’ with hidden sensors that collect real-time data about the overpass’ performance. Researchers at Imperial College London will use this data to analyze how the bridge reacts over time as pedestrians interact with it.

“A 3D printed metal structure large and strong enough to handle pedestrian traffic has never been constructed before,” says Leroy Gardner, a structural engineer at Imperial, in a statement. “It’s fantastic to see it finally open to the public.”

As Mark Girolami, a civil engineer at the University of Cambridge who is working on the digital model, tells New Scientist’s Matthew Sparkes, bridge failures can often be attributed to overlooked deterioration. By constantly transmitting data about a bridge’s status, 3D printed versions may be able to provide early warnings and prevent collapses.