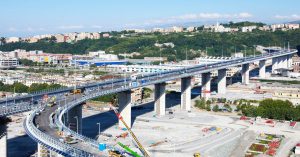 Genoa’s kilometre-long new bridge has officially been opened, less than two years after the collapse of the earlier structure.

Contractors Webuild and Fincantieri have handed over the completed structure to the mayor of Genoa just 15 months after construction began. The original bridge collapsed on 14th August 2018.

Construction of its replacement took 420 days, from the laying of the first pier to the delivery of the completed bridge. Work took place around the clock every day – save for Christmas and a few days of bad weather – with more than 1,000 people representing 40 trades working in parallel at 20 work-fronts.

The 1,067 m long bridge is supported by 18 piers up to 45 m high and has been built using 67,000 m3 of reinforced concrete. Nearly 330 companies from across Italy provided more than €160m (£144m) in supplies and services for the construction of the bridge, representing nearly 80% of the value of the project.

“This bridge is the dream of a lifetime,” said Webuild chief executive Pietro Salini