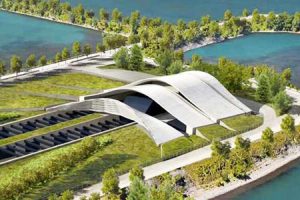 The contract for Quebec Ministry of Transportation involves the rehabilitation of Montreal’s Louis Hippolyte Lafontaine Tunnel and its access roads.

The work will be carried out by the Renouveau La Fontaine consortium, a 50-50 joint venture between Vinci subsidiaries Eurovia and Dodin Campenon Bernard and Canadian company Pomerleau.

The contract involves the financing, design and execution of rehabilitation works. The work will begin in early 2021 and is expected to be completed by July 2025. They include repairing the tunnel structure; landscaping and architectural finishes; modernising all supervisory infrastructure, among other tasks.

Throughout the works, the consortium will be responsible for the operation, upkeep and maintenance of the various sites and roads, which will remain open to traffic at all times.