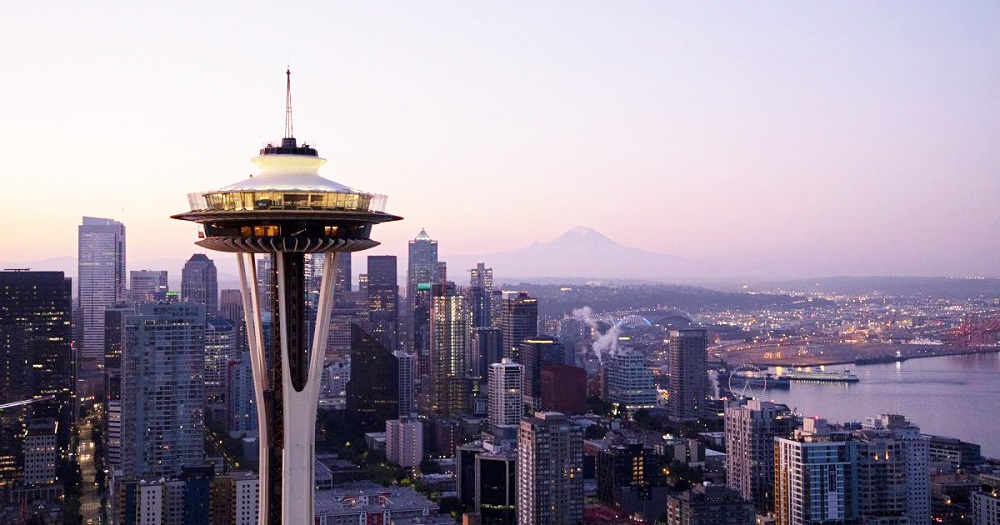 The Space Needle is an observation tower in Seattle, Washington, United States. Considered to be an icon of the city and the Pacific Northwest, it has been designated a Seattle landmark. Located in the Lower Queen Anne neighbourhood, it was built in the Seattle Center for the 1962 World’s Fair, which drew over 2.3 million visitors. Nearly 20,000 people a day used its elevators during the event.

The Space Needle features an observation deck 520 ft (160 m) above ground, providing views of the downtown Seattle skyline, the Olympic and Cascade Mountains, Mount Rainier, Mount Baker, Elliott Bay, and various islands in Puget Sound. Visitors can reach the top of the Space Needle by elevators that travel at 10 mph (16 km/h), completing the ascent in 41 seconds [they are slowed to 5 mph (8.0 km/h) on windy days]. On April 19, 1999, the city’s Landmarks Preservation Board designated the tower a historic landmark.

The architecture of the Space Needle is the result of a compromise between the designs of two men, Edward E. Carlson and John Graham, Jr. The two leading ideas for the World Fair involved businessman Edward E. Carlson’s sketch of a giant balloon tethered to the ground (the gently sloping base) and architect John Graham’s concept of a flying saucer (the halo that houses the restaurant and observation deck). Victor Steinbrueck introduced the hourglass profile of the tower. The Space Needle was built to withstand wind speeds of 200 mph (320 km/h), double the requirements in the building code of 1962. The 6.8 Mw Nisqually earthquake jolted the Needle enough in 2001 for water to slosh out of the toilets in the restrooms. The Space Needle will not sustain serious structural damage during earthquakes of magnitudes below 9.1.

On December 31, 1999, a powerful beam of light was unveiled for the first time. Called the Legacy Light or Skybeam, it is powered by lamps that total 85 million candela shining skyward from the top of the Space Needle to honour national holidays and special occasions in Seattle. The concept of this beam was derived from the official 1962 World’s Fair poster, which depicted such a light source although none was incorporated into the original design. It is somewhat controversial because of the light pollution it creates. Originally planned to be turned on 75 nights per year, it has generally been used fewer than a dozen times per year. It did remain lit for eleven days in a row from September 11, 2001, to September 22, 2001, in response to the September 11, 2001 attacks.

A 1962 Seattle World’s Fair poster showed a grand spiral entryway leading to the elevator that was ultimately omitted from final building plans. The stairway was eventually added as part of the Pavilion and Spacebase remodel in June 2000. The main stairwell has 848 steps from the basement to the top of the observation deck. At approximately 605 ft (184 m), the Space Needle was the tallest building west of the Mississippi River at the time it was built by Howard S. Wright Construction Co., but is now dwarfed by other structures along the Seattle skyline, among them the Columbia Center, at 967 ft (295 m). Unlike many other similar structures, such as the CN Tower in Toronto, the Space Needle is not used for broadcasting purposes. 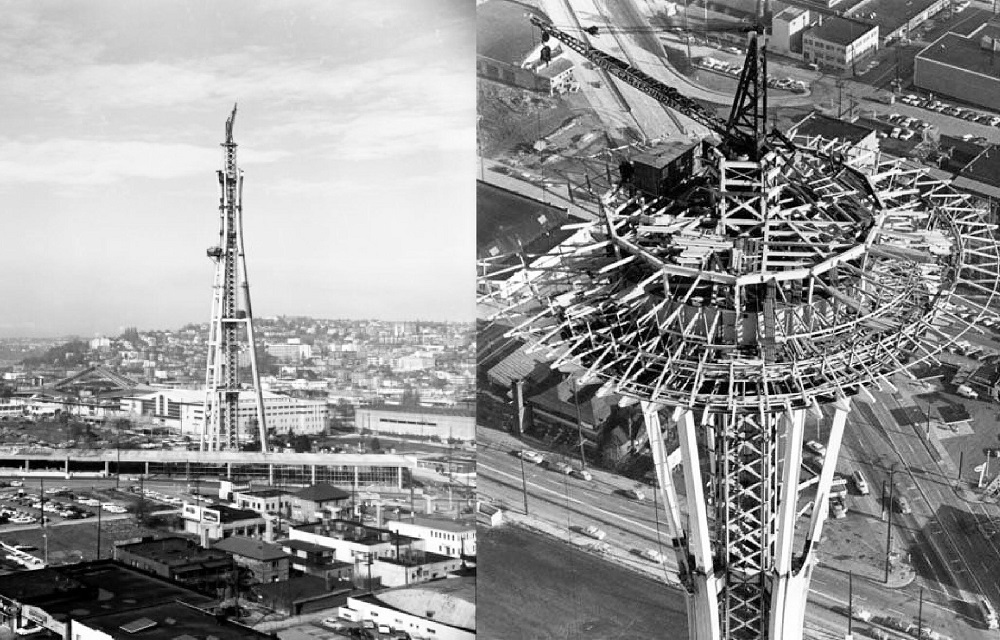 With time an issue, the construction team worked around the clock. The domed top, housing the top five levels (including the restaurants and observation deck), was perfectly balanced so that the restaurant could rotate with the help of one tiny electric motor, originally 0.8 kilowatts (1.1 hp), later replaced with a 1.1 kilowatts (1.5 hp) motor. With paint colours named Orbital Olive for the body, Astronaut White for the legs, Re-entry Red for the saucer, and Galaxy Gold for the roof, the Space Needle was finished in less than one year. It was completed in April 1962 at a cost of $4.5 million. The last elevator car was installed the day before the Fair opened on April 21. During the course of the Fair nearly 20,000 people a day rode the elevators to the Observation Deck.

A renovation of the top of the Space Needle began in the summer of 2017, to add an all-glass floor to the restaurant, and replace the observation platform windows with floor-to-ceiling glass panels to more closely match the 1962 original concept sketches, as well as upgrades and updates to the internal systems. Called the Century Project, the work was scheduled to finish by June 2018, at a cost of $100 million in private funds. The designer is Olson Kundig Architects and the general contractor is Hoffman Construction Company. The rotating restaurant’s motor was replaced, the elevator capacity was increased by adding elevators, or double -stacking them, and the energy efficiency of the building was improved with the aim of achieving LEED Silver Certification. The temporary scaffold’s 28,000-pound (13,000 kg), 44,650-square-foot (4,148 m2 ) platform under the top structure was assembled on the ground, and then lifted by cables 500 ft (150 m) from the ground to the underside of the structure, controlled by 12 operators standing on the platform as it was raised. The platform was made by Safway Services, a company specializing in unique construction scaffolding.

The space reopened in August 2018 as the Loupe, an indoor observation deck.