The Most Photographed Bridge in the World

Golden Gate Bridge is a suspension bridge spanning the three-mile-long (4.8 km) Golden Gate strait (where San Francisco Bay opens into the Pacific Ocean) in California to link San Francisco with Marin county to the north. It carries both U.S. Route 101 and California State Route 1 (Pacific Coast Highway) across the strait and features a pedestrian walkway.

The vision of connecting San Francisco to its northern neighbours became a reality when construction began in 1933. Completed in 1937 after four years of hazardous and complex work, the iconic structure exists as an evidence of human resourcefulness and intelligence. 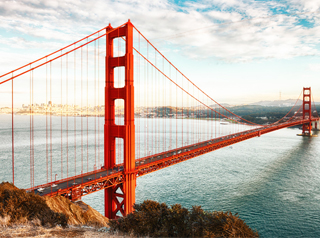 In the late 19th century, San Francisco was one of the fastest developing cities in the United States, but it hit a major speed bump as it began to expand into a major city centre. Prior the construction of the Golden Gate Bridge, the shortest route between San Francisco and the Marin County was by ship: the first ferry service for this route was established in 1820. With the lack of quick and dependable transport system, the city stagnated and ceased to grow. Thus, many locals called for a bridge to be constructed.

Conception Of The Bridge And The Design

In 1916, James Wilkins wrote an article in San Francisco Bulletin estimating the cost of building a bridge across Golden Gate as $100 million and called for proposals with lesser cost. Many engineers and architects supposed it not viable to construct a bridge over such a long channel, with its strong tides, deep water (372 feet at its deepest) and heavy outbreaks of wind and fog. Joseph Strauss reacted with the proposition that a cantilever bridge could be made for $17 million.

The local authorities though agreed to proceed, but on the condition that Strauss would modify the design and accept contribution from several consulting project professionals. A suspension bridge design was considered the most appropriate because of the recent developments in metallurgy. Joseph Strauss is remembered as the chief engineer and designer of the Golden Gate Bridge; however, he collected engineering and design talent on a national scale.

White Charles Alton Ellis was the Chief Principal Engineer for the project, the design was conceptualised and carried out by Leon Moisseff, the designer of New York’s Manhattan Bridge. The design included a bridge inside a bridge at the Southern abutment to guard the Fort point bridge from destruction. A steel arch model was selected for crossing the fort and linking it to the bridge’s southern anchorage.

The colour of the Golden Gate Bridge is officially an orange vermilion called ‘international orange’. The bridge was never meant to appear as it does today. The consulting architect Irving F. Morrow became inspired by the red lead colour and his study resulted in the specification of the unique Golden Gate Bridge International Orange.

The bridge was initially painted with red lead primer and a lead-based topcoat that was two-thirds (by weight) lead, which was retouched as necessary to shield it from the weather. The architects planned the lead-based paint to guard the steel structure from corrosion, but later realised that lead is harmful to humans and the environment.

In the mid-1960s, a program was started to improve corrosion protection by removing the original paint and repainting the bridge with zinc silicate primer and vinyl topcoats. Since 1990, acrylic topcoats have been used for air-quality reasons. The program was completed in 1995 and it is now maintained by 38 painters who touch up the paintwork where it becomes seriously corroded. The maintenance task of painting of the bridge is continuous.

The construction work of the bridge began on January 5, 1933 and it opened to vehicular traffic on May 28, 1937. The project costed more than $35 million ($514 million in 2018 dollars); it was completed ahead of schedule and $1.3 million under budget (equivalent to $23.8 million today). The Golden Gate Bridge construction project was conducted by the McClintic-Marshall Construction Co., a subsidiary of Bethlehem Steel Corporation. Further, the fabricated steel material was manufactured by Bethlehem Steel in its several plants and loaded onto rail cars to Philadelphia, and then further shipped through the Panama Canal to San Francisco.

Due to the chance for stable employment during the Great Depression, the construction crew braved complex conditions over open water. The Golden Gate Bridge was the tallest and longest suspension bridge in the world until 1998. Further, it held the record for the longest main span in the world until New York City’s Verrazano Narrows Bridge opened in 1964 and, as of 2019, the Akashi Kaikyo Bridge in Japan boasts the world’s longest span. Although other bridges have since outdone it in size, it remains unrivalled in the splendour of its setting.

Modern knowledge of the consequences of earthquakes on structures directed a program to retrofit the Golden Gate to stand firm during seismic events. The immediacy of the bridge to the San Andreas Fault places it in danger for a significant earthquake.

In 1953 and 1954, the bridge was retrofitted with lateral and diagonal bracing that connected the lower chords of the two side trusses. The bracing hardened the bridge deck in torsion, leading to an enhanced resistance of the types of twisting that had destroyed the Tacoma Narrows Bridge in 1940.

The Golden Gate Bridge is also facilitated with navigational and warning lights for people travelling by sea and by air. For maritime containers, red navigation lights are placed on the south pier fender, and white and green lights below the deck at mid-span.

The Chief Engineer Joseph Strauss stressed on an unbending safety code, sustained by the safety innovations. Besides wearing safety lines, workers were kept safe through features such as:

At midpoint, the roadway is 81 metres (265 feet) above mean high water. The weight of the roadway is hung from 250 pairs of vertical suspender ropes, which are attached to two main cables (each cable is made of 27,572 strands of wire). The main cables pass over the two main towers and are fixed in concrete at each end. The total length of galvanised steel wire used to fabricate both main cables is estimated to be 80,000 miles (130,000 km). Further, bridge’s two towers have approximately 600,000 rivets each. 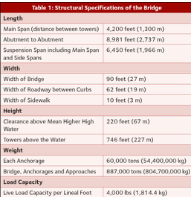 Until the 20th century, a bridge across the Golden Gate Strait was considered as not viable: it was known as ‘the bridge that couldn’t be built’. This was because of the complex challenges presented by the strait, strong tides, wind, fog, and the San Andreas Fault located just 7 miles offshore. However, the developments in long-span bridge design suggested that it could eventually be accomplished.

The fog on August 14, 1933, resulted in a collision between a cargo vessel and the access trestle, causing serious damage. The workers also had to blast rocks under deep water to plant earthquake-proof foundations. Further, a construction crew member fell to his death during construction of the bridge; resultantly, a movable safety net, innovated by Strauss was installed, which saved a total of 19 men. However, the safety net failed on February 17, 1937, when it gave way under the weight of a scaffolding collapse; of the 13 men who were on the scaffolding, one jumped clear, two survived the fall into the water, and 10 were killed.

In addition, the bridge was built on a fault line that presents constant danger of earthquakes. Further, strong winds from Pacific can sway the bridge but it is built in a manner that it can swing sideways 8 metres and withstand blows of wind that are up to 160 km/h. The Golden Gate Bridge withstood the destructive Loma Prieta earthquake of 1989, and was closed to traffic only three times in its first 75 years due to weather conditions.

Today, the West Coast landmark attracts millions of commuters and tourists each year. The bridge regularly carries people across the strait and still shines just as vibrantly as it did when it initially opened in 1937. It has been featured in countless photographs, films, songs, etc. Also, the Golden Gate Bridge rivals the Statue of Liberty as one of the most famous symbols in American popular culture.

Believed to be the most photographed bridge in the world, this landmark was named one of the seven civil engineering wonders of the United States by the American Society of Civil Engineers in 1994.

The Golden Gate Bridge, both despite and because of its age, is still one of the best examples of ‘the technological sublime’; not just for its beauty, but for what its exquisiteness reminds us of: perseverance and triumph.