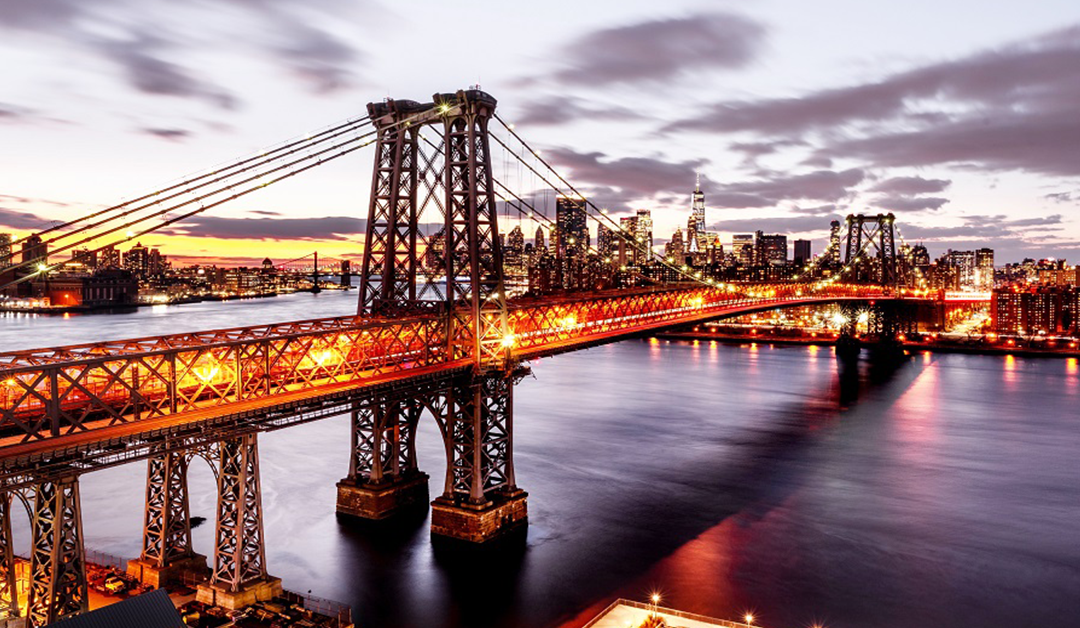 Spanning the East River between the boroughs of Manhattan and Brooklyn, the Brooklyn Bridge is the first hybrid cable-stayed/suspension bridge in New York City.

The bridge widens and contracts between the extremes of temperature from 14 to 16 inches. Navigational clearance is 127 ft (38.7 m) above MHW.

There is 930 feet (280 m) long gap between each suspension tower and each side’s suspension anchorages.

Structure containing six trusses supports the main span and side spans. This structure runs parallel to the roadway, each of which is 33 feet (10 m) deep. The Brooklyn Bridge is able to hold a total load of 18,700 short tons (16,700 long tons) with the help of the trusses. These trusses are supported by suspender ropes, which hang downward from each of the four main cables. Crossbeams run between the trusses at the top, and diagonal and vertical stiffening beams run on the outside and inside of each roadway.

An elevated pedestrian and cycling promenade that is 10 to 17 feet (3.0 to 5.2 m) wide, runs in between the two roadways and 18 feet (5.5 m) above them. It typically runs 4 feet (1.2 m) below the level of the crossbeams, except at the areas surrounding each tower. Here, the promenade rises to just above the level of the crossbeams, connecting to a balcony that slightly overhangs the two roadways.

Construction of the Brooklyn Bridge began on January 2, 1870. The first work entailed the construction of two caissons, upon which the suspension towers would be built.

The wire was then stretched back across the river, and the two ends were interwoven to form a traveler, a lengthy loop of wire connecting the towers, which was driven by a 30 horsepower (22 kW) steam hoisting engine at ground level.The wire was one of two that were used to create a temporary footbridge for workers while cable spinning was ongoing. A second traveler wire was stretched across the span, a task that was completed by August 30 1876.Anchorages 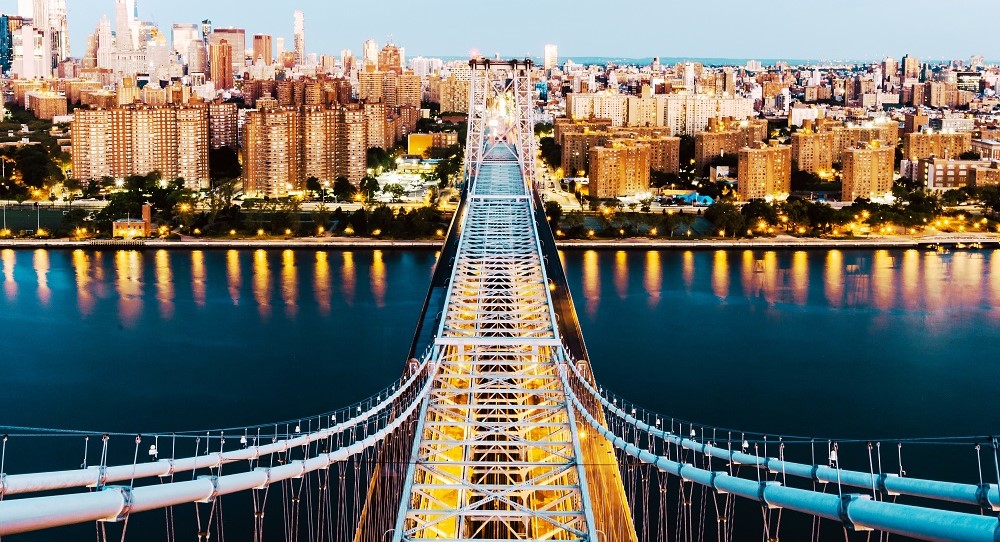 After the caissons were completed, piers were constructed on top of each of them upon which masonry towers would be built. The towers’ construction was a complex process that took four years. Since the masonry blocks were heavy, the builders transported them to the base of the towers using a pulley system with a continuous 1.5 – inch (3.8 cm)-diameter steel wire rope, operated by steam engines at ground level. The blocks were then carried up on a timber track alongside each tower and maneuvered into the proper position using a derrick atop the towers.

The project depleted its original $5 million budget in the year 1875, while it was under construction. So, both the bridge commissioners, one each from Brooklyn and Manhattan, petitioned New York state lawmakers to allot another $8 million for construction. At the end, the legislators passed a law authorizing the allotment with the condition that the cities would buy the stock of Brooklyn Bridge’s private stockholders.

The bridge had cost US $15.5 million in 1883 dollars to build, of which Brooklyn paid two-thirds. Rehabilitation of the bridge cost about $153 million. As part of the project, the bridge’s original suspender cables installed by J. Lloyd Haigh were replaced by Bethlehem Steel in 1986, marking the cables’ first replacement since construction.

A permanent contract was awarded, the builders ordered 30 short tons (27 long tons) of wire in the interim, 10 tons each from three companies, including Washington Roebling’s own steel mill in Brooklyn. In the end, it was decided to use number 8 Birmingham gauge (approximately 4 mm or 0.165 inches in diameter) crucible steel. In January 1877, a contract for crucible steel was awarded to J. Lloyd Haigh, who was associated with bridge trustee Abram Hewitt.

The first major upgrade to the Brooklyn Bridge commenced in 1948, when a contract for redesigning the roadways were awarded to David B. Steinman. The renovation was expected to double the capacity of the bridge’s roadways to nearly 6,000 cars per hour, at a projected cost of $7 million. The renovation included the demolition of both the elevated and the trolley tracks on the roadways, the removal of trusses separating the inner elevated tracks from the existing vehicle lanes and the widening of each roadway from two to three lanes, as well as the construction of a new steel-and-concrete floor.

The Roeblings family are largely responsible for the conception, design, development and execution of the bridge.

This bridge was designated a National Historic Civil Engineering Landmark in 1972.

At the time of construction, contemporaries marveled at what technology was capable of, and the Brooklyn Bridge was seen as a symbol of optimism and aspiration in the field of engineering upon its completion in 1883 and it remains an inspiration till date. 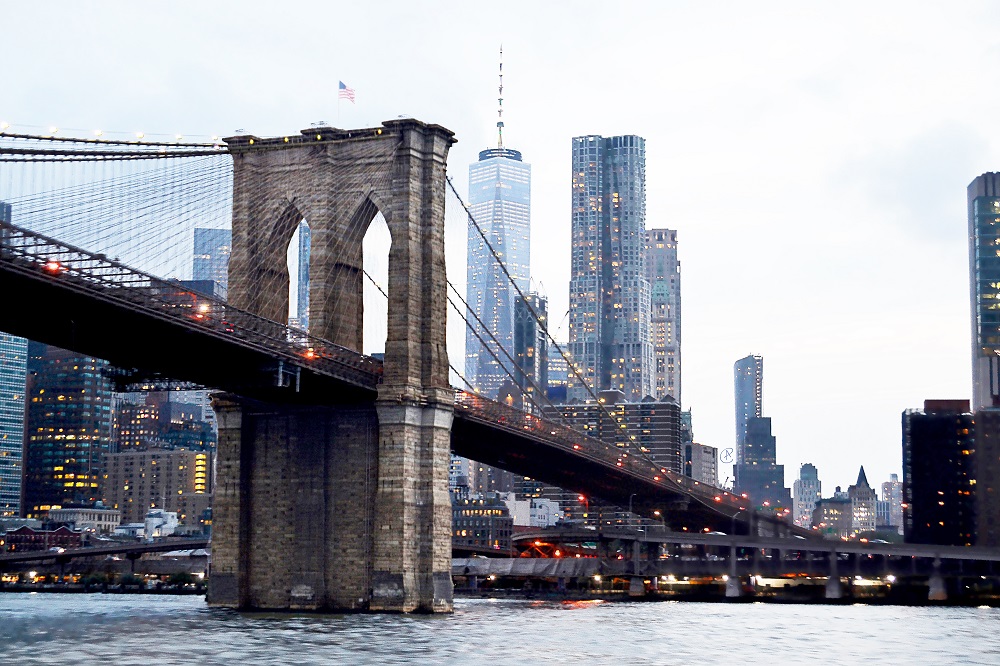