Located in the Eixample district of Barcelona, Catalonia, Spain; Pope Benedict XVI consecrated the church and proclaimed it a minor basilica on 7th November 2010. The construction of the temple began in 1882 and its completion is expected in 2026. Aside from being the tallest church, Sagrada Familia is set to become the structure that has the longest time to construct with a record of 137 years and still counting. If the plan scheduled remains on track, it will be completed in a total span of 144 years which is around 10 times longer than the construction of the Great Pyramid of Giza and 123 years longer than the time needed to finish the Taj Mahal. 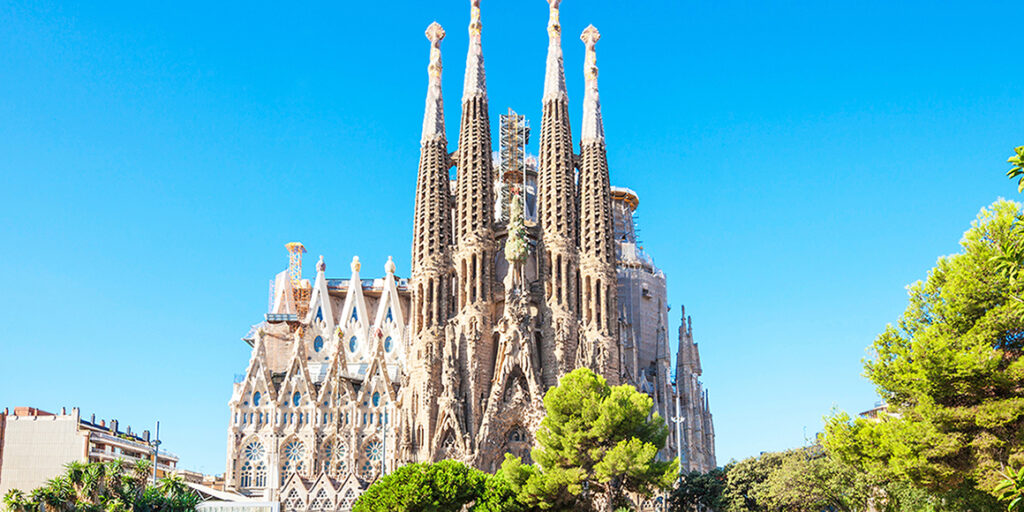 The basillica is considered to be Barcelona’s top economic contributor, supporting the economy with 4.5 million visitors annually who pay 17 to 38 euros to tour it. The current total estimated building costs stands at €374 million. 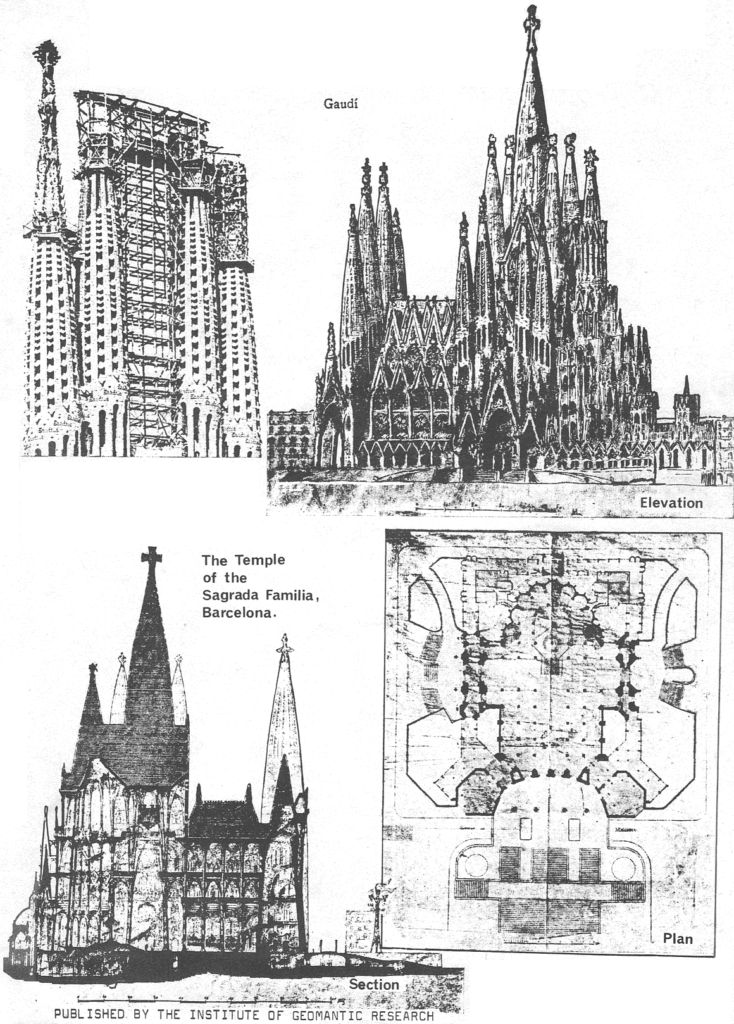 Sometime in 1866, a congregation of devotees of St. Joseph headed by Josep Maria Bocabella envisioned a temple to honour him. Funded by private donation, the construction started and the foundation stone was laid in 1882, on March 19, in the middle of a land of 12,000 square meters. The first architect was Don Francisco de Paula del Villar y Lozano but soon abandoned the project because of disagreements.

A year later, in 1883, Antoni Gaudi became the architect and gave it a new direction. He worked on the project until his tragic death in 1926, in full anticipation he would not live to see it finished. Interestingly, Gaudí was never concerned about the speed of construction. He even once said, “My client is not in a hurry.” The architect was aware that the church would take generations to complete and kept his plans flowing.

“There is no reason to regret that I cannot finish the church. I will grow old but others will come after me. What must always be conserved is the spirit of the work, but its life has to depend on the generations it is handed down to and with whom it lives and is incarnated. ” This was Gaudí’s philosophy when it came to finishing his masterpiece. After his death, his disciple, Domènec Sugranyes took over the directions of the work.

Design and Planning
He maintained del Villar’s Latin cross plan, typical of Gothic cathedrals, but departed from the Gothic in several significant ways. Most notably, Gaudi developed a system of angled columns and hyperboloidal vaults to eliminate the need for flying buttresses. Rather than relying on exterior elements, horizontal loads are transferred through columns on the interior.

La Sagrada Familia uses three-dimensional forms comprised of ruled surfaces, including hyperboloids, parabolas, helicoids and conoids. These complex shapes allow for a thinner, finer structure and are intended to enhance the temple’s acoustics and quality of light. Gaudi used plaster models to develop the design, including a 1:10 scale model of the main nave measuring 5 meters in height and width by 2 meters in depth. He also devised a system of strings and weights suspended from a plan of the temple on the ceiling. From this inverted model he derived the necessary angles of the columns, vaults and arches. This is evident in the slanted columns of the Passion facade, which recall tensile structures but act in compression.

The central nave soars to a height of 45 meters and is designed to resemble a forest of multi-hued piers in Montjuïc and granite. The piers change in cross section from base to terminus, increasing in number of vertices from polygonal to circular. The slender, bifurcating columns draw the eye upward, where light filters through circular apertures in the vaults. These are finished in Venetian glass tiles of green and gold, articulating the lines of the hyperboloids. 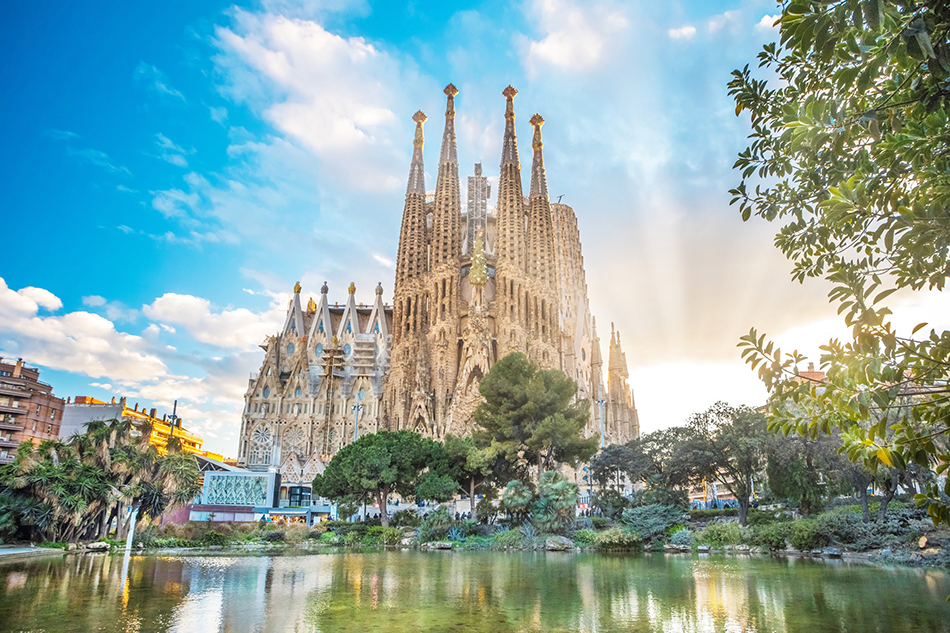 Interior
The church plan is that of a Latin cross with five aisles. The central nave vaults reach 45 meters (148 feet) while the side nave vaults reach 30 metres (98 feet). The columns are on a 7.5 metre (25 feet) grid. The crossing rests on the four central columns of porphyry supporting a great hyperboloid surrounded by two rings of twelve hyperboloids (currently under construction). The central vault reaches 60 metres (200 feet). The apse is capped by a hyperboloid vault reaching 75 metres (246 feet). Gaudí intended that a visitor standing at the main entrance be able to see the vaults of the nave, crossing and apse; thus the graduated increase in vault loft.

The columns of the interior are a unique Gaudí design. Besides branching to support their load, their ever-changing surfaces are the result of the intersection of various geometric forms. The simplest example is that of a square base evolving into an octagon as the column rises, then a sixteen-sided form, and eventually to a circle. This effect is the result of a three-dimensional intersection of helicoidal columns.

Three Distinct Facades
The first one, the Nativity facade, was completed in 1935 and is influenced directly from the Gaudí’s style. It is dedicated to the birth of Jesus with the symbolic sunrise to the northeast. The facade also shows elements related to the Nature and the creation of life. The second one is the Passion facade is simpler and dedicated to the suffering of Christ during his crucifixion. The facade was supposed to show the sins of human beings. Several architects worked on this facade and tried to remain faithful to Gaudí’s style while bringing their own style at the same time. The facade is directed to the West and faces the sun as a symbol for the death of Christ. The last one is the Glory facade, the largest facade which is still under construction. It is dedicated to the glory of Jesus and the road to reach God going through death, final judgment and glory. 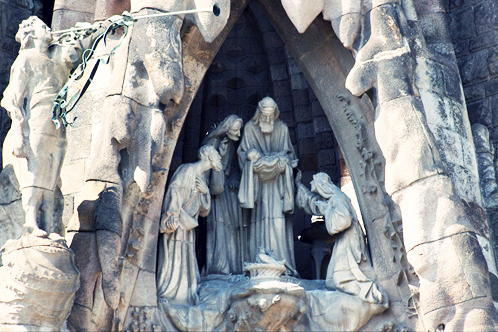 Curved Lines
Antoni Gaudí decided to design the Sagrada Familia, like most of his works, with curved lines. According to Gaudi, straight lines did not exist in the nature, and this is why the temple – which reflects the nature, life and death – should not be constructed with straight lines. As a symbol of Nature, the columns of the Sagrada Famlia are built in a tree-shape to support the whole monument 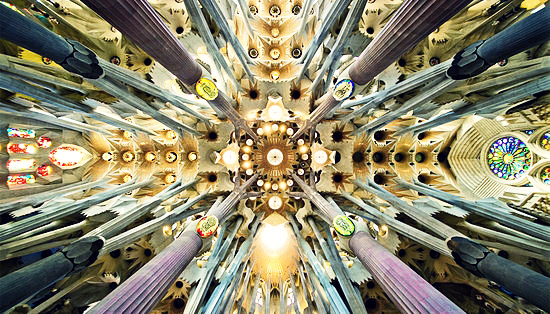 In recent years, La Sagrada Familia has adopted comparatively new digital design and construction technologies. Architects and craftsmen use Rhinoceros, Cadds5, Catia, and CAM to understand the complex geometries and visualize the building as a whole. Plaster models are still used as a design tool, now generated by a 3-D printer to accelerate the process.