The ever-growing demands on the concrete are closely linked to the development of self-consolidating concrete (SCC). There are increasingly becoming the focus in additional to the usual vibrated concretes. With the development of high-performance additives such as super plasticizers, the SCC can be adapted very precisely to the growing requirements. This associates with a high sensitivity of the SCC to fluctuations in the quality of the starting materials, e.g. admixtures. The setting window of these self-consolidating concretes is very narrow and the handling therefore complicated and difficult. The robustness of the SCC is significantly lower in comparison to conventional concretes, which means that the acceptance in practice is quite moderate.

In addition to the high requirements for the hardened concrete, e.g. durability, compressive strength and improved surface quality, the characteristics of the fresh concrete are important in terms of processing ability, stability against sedimentation and the ability to vent. Over time, many empirical methods have been developed to determine the properties of fresh concrete such as slump test, flow table or V-funnel.

Depending on the requirements, fresh concrete is very different and should always be tested before installation. In addition to the test on hardened concrete in the laboratory, tests on fresh concrete according to the valid standards and regulations are carried out. While these tests are sufficient for the characterization and classification common vibrated concrete, in most cases these are unsatisfactory for characterizing SCC. The characterization of the rheological properties of the SCC is only possible to a limited extend using the existing standardized methods.

The properties of the fresh SCC are strongly influenced by the inter-particular interactions that determine the rheological behaviours of the cementitious suspensions. A suitable additive can interfere with the inter-particle interactions and thus strongly influence the rheology of fresh concrete. As a result, even small fluctuation in the water content can lead to major changes of the fresh concrete behaviours, which are reflected in the changed flow ability, different aeration behaviour and especially in decreasing mixture stability and segregation. For better understanding this problem, new measurement methods must be developed that deal with the rheology of fresh concrete.

The knowledge of flow mechanics and rheology is very important not only in the area of concrete development, but also for quality control in the construction laboratory or directly on the construction site in the case of concrete deliveries. The investigations of the rheological properties must be carried out. This leads to a necessity in the development of rapid and uncomplicated processes for measuring of rheological behaviours of fresh concrete suspensions.

For the determination of the rheological properties of fresh concrete, a large number of measuring instruments and measuring systems are currently available. A few of these rheometers were adopted from other branches of industry and are often not suitable for measuring suspensions. The most common rheometers are rotational rheometers which based on the laminar flow of the investigated fluids. However, a laminar flow does not exist for the concrete due to their high inhomogeneity. A further problem of these rheometers is the occurrence of the lubricating layer at the interface between the sample and the surface of the sample container, which leads to the measurement of an apparent lower shear stress. The main problem is however considerable influence of the flow characteristics and the particle migration and particularly particle segregation during the measurement. In addition, a partial permanent and often excessive shear from the rheometer destroys the inner structure of the cementitious samples and thus affects the stiffness and setting behaviours of the concrete as well.

The mobile rheometer for fresh concrete, eBT-V, was developed from Schleibinger Geräte particularly for the measurement of the suspensions with the particle size up to 32mm (fig. 1). The device is battery driven and water proof and can be used in the laboratory and at the construction site for research and development but also for the quality control. The device is cable-free and will be operated via the mobile app. The control via smartphone allow fast and easy operation of the device as well as a transmission and display of the results. 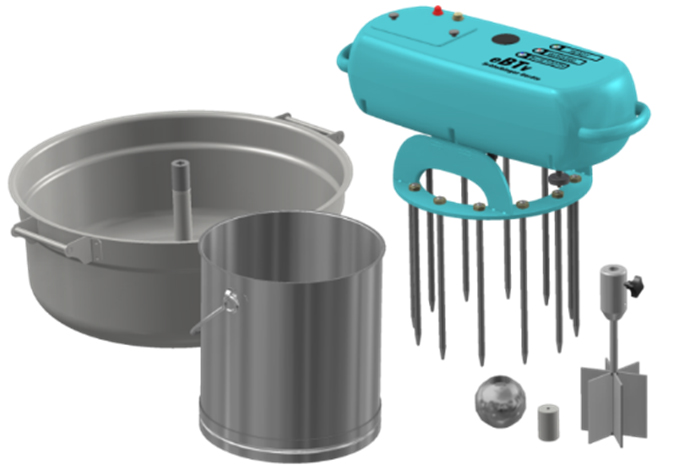 Due to the built-in variable speed drive, different speed settings are possible to realize. The measurement program can be set and saved individually as a ramp or step profile. In addition, the device offers a not negligible practical advantage – the measuring probe and the sample container are easy to clean.

With the maximum torque of 10Nm the concrete rheometer eBT-V can be used to characterize both very fluid and very stiff concretes as well. The rheometer can be operated in two different modes, which are called P-mode and V-mode. The schematic representation of operating modes is shown in fig. 2.

Fig. 2: Schematic Representation of the Operation Modes of the Mobile Rheometer eBT-V

Operation in P-mode is particularly suitable for the fluid and stiff mixtures where the measurement must be carried out in a non-sheared mixture. Only one revolution of the device is enough for the investigations of the properties of fresh concrete. For the measurement a cylindrical or spherical probe is attached to the measuring device. After the device has been placed on the centering rod of the sample container, the rheometer rotates according to the measurement profile. The drag-force on the probe is measured independent of the insertion depth. The data from the probe will process into a flow curve considering the different angular speeds and the distance to the centering rod. After evaluation of the measured data according to Bingham model the relative yield stress and the relative viscosity can be determined. From the evaluation of the stationary force at constant low speed equilibrium shear stress can be obtained.

Using a profile based on one revolution the measurement is performed in non-sheared fresh mixture at any time. As a result, problems such as segregation and structural break down during the measurement are greatly minimized. The measurement time can be adjusted to less than one minute.

Operation in V-mode is particularly suitable for the fluid and very fluid mixtures such as SCC. For the measurement a vane probe will be used. In recent years, the vane geometry has gained popularity as a simple and effective measuring tool for non-Newtonian fluids. Once widely used in the food industry, this probe geometry is increasingly used for the investigations of the cement-based systems.

Using the vane probe minimizes damage to the sample structure during the measurement. Due to the star arrangement of the wings, the sliding on the wall of the probe is almost completely prevented. The wall slipping on the container surface can be prevented by using a device holder with integrated anti-slip rods.

The device is fixed on the device holder and the Vane probe is attached on the drive shaft. The measuring container is filled with the sample and the instrument holder with the device mounted on it is placed into container. The rheometer measures the torque on the vane probe as a function of the speed. The plastic viscosity and the yield stress are calculated from the angular velocity and the measured torque according to Bingham model. The calculation from torque to shear stress can be done by the mathematical model using the Reiner-Riwlin equation. As an example, the measurement results of a SCC mortar with maximum particle size of 4mm are shown in fig. 3. The measurement results for SCC concrete with the maximum particle size of 20mm are shown in fig. 4.

Fig. 4: Measurement with eBT-V in Vane mode: SCC Concrete with Viscosity Agent and Particle Size up to
20mm Measured with Step Profile (left) and Data Evaluation According Bingham Model (right)

The growing demands on the material are accompanied by the growing demands on measurement technology. Particularly within the area of concrete production and rheological measurements, there have so far been insufficient measurement possibilities. The company Schleibinger Geräte has developed a mobile rheometer which records the rheology of the fresh concrete and in particular of fresh self-compacting concrete and thus offers new possibilities in the field of concrete development and quality control as well.

The measurement profile can be set individually and the test can be carried out within a minute. The device is cable-free and will be operated via the mobile app, which allows the results to be transmitted and displayed quickly. The rheometer is robust and mobile and can also be used in the laboratory and in the construction site.