Rehabilitation And Retrofitting Of Concrete Buildings

Buildings constructed with stones, mud, brick, wood, etc. was extremely popular in ancient India; however, that changed during the early 19th century. The second half of the 19th century marked a new era for reinforced concrete structures in India and the demand has grown manifold, especially in urban cities. Many concrete buildings built during the second half of the 19th century were designed with a lifespan of 50-100 years. So, these buildings have either surpassed their design life or are in a deteriorated state due to poor maintenance.

Every year, several people lose their lives due to collapse of old buildings. Thus, the urgent need to restore these buildings has fuelled the redevelopment, rehabilitation and retrofitting segment of India’s construction industry. Apart from ageing buildings, there are several other reasons that necessitate rehabilitation and retrofitting of structures; the other reasons include-faulty construction, incorrect design, seismic requirements, upgrading of structure as per revised codes, change in building use, change in FAR, etc 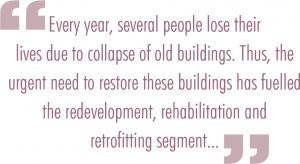 Moreover, despite a steady increase in demand for concrete structures, there is a lack of any comprehensive national code or standard that covers in-depth all aspects of rehabilitation and retrofitting. Consequently, a comprehensive plan is prepared by the engineers for various stages of retrofitting based on experience and understanding of the structure. This situation is further complicated when the structural drawings are not available, which is the case for most of the old buildings. The maintenance and repair work are also not properly documented in most cases. The structural stability of the buildings is also affected by un-engineered repairs or patch work repairs, which fail to address the primary problem. Unauthorized and un-engineered additions to the building further add to the woes of the engineers assigned the task to retrofit it. 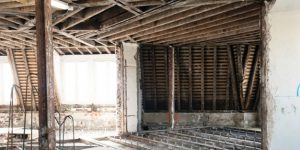 The retrofitting process starts with the inspection and documentation of the health of the building. The structure is thoroughly inspected using visual checks, non-destructive testing, destructive testing, concrete scanning, etc. Further, building drawings, previous maintenance records, etc., are also reviewed, if available. Based on the inspection, the performance of the building is evaluated; if the structure is found to be deficient and fails to meet performance requirements, then redevelopment, rehabilitation or retrofitting is opted for depending on economic viability. The appropriate rehabilitation or retrofitting method is selected based on performance analysis and inspection. A combination of different techniques is usually used depending on the requirement and site limitations. If during re analysis it is determined that the retrofitted structure will be capable of fulfilling performance requirements with the selected measures, then the proposal is finalized, and the retrofitting work is executed.