The rising dissatisfaction over the growing inadequacy of conventional on-site construction has directed exploration of off-site construction options that consider a more streamlined approach to the construction process. During the exploration, the builders come across terms such as prefabrication, modularization, or modular vs. prefab. 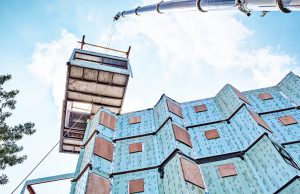 The Difference Between Prefabricated And Modular Construction

Modularization is a method of construction where rather than smaller structural components, an entire unit of a building is constructed off-site. Such buildings serve multiple purposes, and can be planned and constructed to serve practically any function. They are principally well-matched for buildings such as hotels, apartments, student housing, and any other form of structure that comprises repetitive units for similar purposes.

The modular buildings are mostly manufactured in a factory. The modules, which are essentially box-like structural units, which post assembling, form the complete structure, are shipped to the site after manufacturing, where they are also assembled. Further, modular structure construction employs an inside-out technique to manufacture a building; the modular frames are built as planes, fixed as boxes, and then completed from the inside out.

Though prefabricated housing is believed to be a modern innovation, such structures were first constructed in India during Akbar’s rule in the 16th century. Prefabrication and modularization are construction processes that the industry has used for centuries. So, many may ask about the newness in these old and well-established methods used in construction projects. Everything old about prefab and modular is new again. This re-emergence of prefab and modular as a ‘new’ trend is tied to the rise of BIM and green building.

The 3D modelling tools are well-established in manufacturing sector, but the idea is comparatively recent in the construction sector. As to an extent prefabrication shifts the construction to a factory, it paves way for inclusion of automated manufacturing systems that are based on digital component models; machine-tools controlled by CNC robots are a renowned example.

In addition, Building Information Modelling (BIM) generates extremely detailed documents and specifications; however, fulfilling these requirements in an open construction site is a major challenge. Conversely, a controlled factory environment leads to enhanced quality and higher accuracy. The BIM tools present the solution to most of the progress in modular assembly through a thorough 3D visualization of components to ensure that the completed parts fit, along with the means to detail every constituent for accurate manufacturing.

The Rise Of The Prefabricated Building

The interconnected matters of the increasing expenses of conventional construction techniques, shortage of skilled construction labour and the deteriorating status of affordable housing largely contribute to the shift towards prefabrication.  The construction industry as a result of its ability to deal with economic, quality and environment related concerns, stands up to the challenge of rising housing, commercial and industrial requirements on a global level.

The architects, designers, and construction experts are employing fresh innovations and approaches to take construction to the next level; ranging from sustainable infrastructure to mass production of affordable housing, the construction industry is transforming the world with prefabrication.

Based on research ‘Prefabrication and Modularization: Increasing Productivity in the Construction Industry’ conducted by McGraw-Hill Construction, modular construction in most of the cases, resulted in a better quality building, completed in lesser time with more predictable costs. Further, the unique selling point of Prefabrication and Modular Building Construction, which is supposedly expected by several sources to grow at CAGR of 6%-7% by 2020, totalling US $209 billion, is minimizing cost and maximizing ROI (Return on Investment). 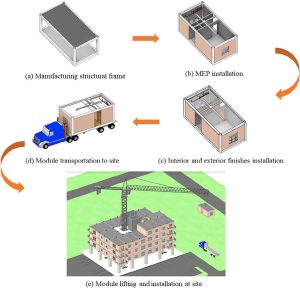 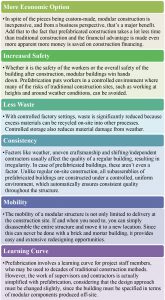 Adoption Of Prefab In India

Internationally, prefabrication has been significantly adopted by the construction sector, andthe Burj Khalifa and the Sydney Opera House are two of the most brilliant examples. Further, prefabricated homes have already gained popularity in the developed regions such as Europe, Canada and the United States. Based on their advantages, prefabricated homes should also be an efficient strategy in developing nations such as India.

Technavio, a global technology research and advisory firm published in a report that the global prefabricated construction market is expected to grow at a CAGR of 6-7% by 2020, as discussed earlier. The transformative technologies being led principally by prefabrication are now beginning to blur lines between the construction and manufacturing sectors in India. Still, in India, the adoption of modular technologies persists to stay slow and prefabricated buildings include only 1% of India’s US $100 billion real estate market. The main reason for this being that prefabrication as a technology is still battling a mindset blockade in India, with most developers unwilling to invest in modular methods of construction and hesitant to integrate prefabrication in their new and ongoing projects.

The Indian construction marketplace currently stands inundated by constricted space, overcrowding, delay in completion and clearance snarls. Also, the sector continues to be labour concentrated and greatly dependent on conventional construction practices. Though, the cost of switching to prefab is a lot higher, in the long term, it is prefabrication that can provide developers the advantage of time, security and excellence, allowing them to manufacture buildings quicker and meet the demand.

Despite the challenges, over the next few years, India is expected to feature amongst the fastest-growing countries in terms of construction output, making technology intervention a key component of this.

The adoption of transformative technologies was sluggish initially, as the focus of the industry was on employing tech innovation in manufacture of construction equipment. But, over the last few years, rather than equipment, the emphasis has been on the process of construction and design. As the Indian construction sector is expected to expand to a size of US $1 trillion and contribute over 15% to the overall GDP, the coming decade will be ruled by prefabrication. The Indian government’s grand plan of constructing 20 million affordable houses and 98 smart cities by 2022 will witness the two major sectors, construction and manufacturing, unite to form a network for improved innovation and technology implementation. Thus, prefabrication is estimated to be a key contributor in the mission ‘Digital India’ and all infrastructural development.