India has undertaken the most comprehensive and planned urbanization. Between now and 2030, 700-900 million sqm of urban space is to be developed every year to accommodate 40% of the total Indian population that is expected to be based out of the urban areas. By 2030, cities may contribute to around 66% of the country’s GDP and close to 90% of tax collection. Planned urbanization shall be decided by the Centre and urban local bodies as well. The pertinent issues regarding the development is not only of smart city, smart roads, smart bridges, with smart design and smart monitoring, but also other components of the urban infrastructure development such as mall, toll plazas, hospitals, community centres, gardens, parking facilities with stringent securities, industries for sufficient job creation, safety measures/fire station, communication, electrification, drinking water, local transport system, smart facilities for kids, children, ladies, senior citizens and disabled persons, domestic and all kinds of animals having habitation in the cities with proper care and settlements, proper factual treatment of patients and their travel.

Last but not the least, simple rules and practically being enforced in public life including proper and working CCTV camera installation at critical locations at least. All old/accident and dumped unrepairable vehicles lying in public places not allowing to utilize the rare available space shall be removed at least within one year of accidents or disputes. Any court/disputed cases shall not take more than 1-2 years for its final judgments. This is the basic demand of the public particularly senior citizens, disabled persons and ladies for having developed infra structure at the time of the need.

The disputed cases must be settled preferably with in one year as compared to the court /police cases, which are being settled and dealt with in a week or so in many countries. The paper describes some realistic/ practical problems and their remedial measures/solution.

There is significant amount of momentum in urban areas and things may work with either due to simple design or its implementation in making smart cities, roads, bridges etc: liveability, employability and productive use of public spaces. Progress is being made for making Smart urban infra structure at the level of government & local bodies to pursue cities to become smart for infrastructure developments (Figure 1). 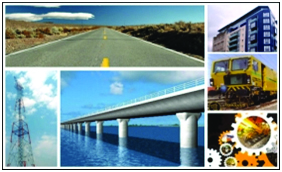 Today, the attachment of word ‘smart’ to any noun has become synonymous with thinking, connected and mobile technologies, as well as the Internet of Things. Smart phones, smart watches, smart cars, smart cities, smart roads … it’s an ever-increasing list of ingenuity.

Smart roads mean that roads that think, feel, and predict the needs of the people and the vehicles that travel on them. Roads that have an environmental conscience, charge our vehicles with fitted sensors in the roads using solar energy and help to improve our safety. Roads that make a difference to the world. Presently, roads are a simple science. They help us get to and from places in the safest, most efficient manner. They connect us to other people, cities and towns. Roads are the literal bedrock of future transport. On the other hand, smart road is a well-planned, animated, beautiful system and incorporated with warning system, with multilevel parking and multilevel roads. (Figure 2.) 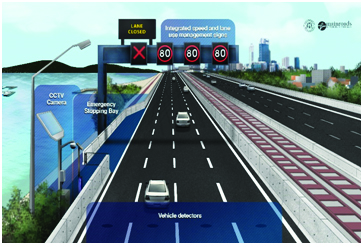 This tragedy may have been prevented had the bridge been equipped with a network of smart bridge sensors providing continuous monitoring of various properties. For instance, the six-lane, 2.9 km Charilaos Trikoupis Bridge (Rion-Antirion Bridge) in Greece has 100 sensors (300 channels) that monitor its condition. Soon after opening in 2004, the sensors detected abnormal vibrations in the cables holding the bridge, which led engineers to install additional weight to dampen the cables.

Only a handful of other smart bridges across the globe incorporate sensors of various types, including accelerometers, strain gauges, anemometers, weigh-in-motion devices, and temperature sensors. The Tsing Ma Bridge in Hong Kong, the world’s seventh longest suspension bridge, is equipped with more than 350 sensor channels. The bridge, which can handle wind speeds up to 341 km per hour, uses GPS sensors mounted on the towers and cables to measure wind speed.

Steffen Sorrell, focuses on two over-arching benefits of smart cities – sustainability and efficiency. To that end, he identified following five essential components of a smart city or intelligent infrastructure developments:

Ways And Means For Improvement

To improve the quality of living conditions in existing authorized colonies and Govt. developed sectors in urban areas following actions are proposed for infrastructure development:

Amaravati: The Andhra Pradesh government has been adopting a focused approach to fill the widening gaps in infrastructure across the state and to meet the challenges posed by a fast-expanding urban geography and demography. The government has drawn up a two-pronged action plan to build up the requisite urban infrastructure and fulfil the citizens’ needs, with the first phase expected to be completed in the next two years. “The prime focus is to meet the National Service-Level Benchmarks (SLBs) by improving the key service-level indicators for delivering the desired outcome to the public.

Full protection with proper justice shall be provided to the Farmers, whose land is being acquired. His consent shall be paramount importance. Considering steep rise in population, more jobs will have to be generated in the next quarter century, at the rate of ~8 million new jobs every year. In recent years of the reform era, the net rate of job generation in the organised sector, relying on the government’s own data, is under 0.5 million per year. Pertinent here is the fact that this is the era of disruptive robotization across all industries: governments boast of jobs that get created, not of jobs lost to automation.

The reigning vision also implies that our cities will be able to provide the enormous infrastructure — of clean air and water, sanitation and power, roads and communication, housing and social security.

Typically, there is very little technology that goes into roads. They tend to be made from asphalt or concrete including white topping or cell fill pavement, which is compacted into a smooth, solid surface and painted upon to indicate certain restrictions, routes and information. The real development of urban infrastructure means a smart city with a smart road/smart bridges, which can provide citizens with smart mobility”.

For now, the focus shall be on the re-imagining and adapting existing roads and cities and their immediate environment to ensure that the promise of smart mobility is delivered upon. Cities have developed over the past 100-200 years. A few suggestions: i) Beautify these Roads. Put similarly designed boards. ii) All establishments must not encroach upon the footpath with their goods or vehicles. All Shops/offices etc on these roads should have a frontage made using vernacular techniques and materials. iii) No customer should stand on the footpath to transect the business.

Traffic congestion is acute problem in all cities. With time it is going to worsen further. Some of the main roads shall be identified to improve them to ease the traffic with proper installation of sensors indicating which route is better and which rout is having less pollution. Electric buses could be charged automatically by the sensors fitted in the roads. Efforts shall be made to keep the smart roads and bridges free of all commercial activity. Smart design standards must also adopt a barrier free design for citizens with disabilities and who are physically challenged.