Polypropylene fibres have been applied for reinforcement of cement mortars and concrete for many years. They restrict crack propagation and affect many concrete parameters. Good results are obtained by application of fibrillated fibres with the net-like structure obtained from the polypropylene. The fibres are chopped to specified lengths and used for the reinforcement of concrete and cement mortars. The beneficial effect of fibres on the compressive strength of concrete is revealed after freezing and thawing cycles. For mortars reinforced with fibrillated fibres, a significant increase in the bending strength is observed by mechanical anchoring, which results from opening of the network structure and splitting of fibrillated fibres

The highest bending strength was registered for micro fibre ranging length of 20 mm and the fibre content of 0.1% of total concrete. By this length, during mixing of the mortar, the fibres remain straight and do not bend or tangle. Fibres have relatively large contact surface to form a sufficient number of adhesive connections with the mortar components and to provide high friction forces during pulling fibres ends out of the matrix.

Cracks play an important role as they change concrete structures into permeable elements and increase the risk of corrosion. Cracks not only reduce the quality of concrete, but also make structures out of service. Therefore, it is important to reduce the crack width and this can be achieved by adding polypropylene fibres to concrete.

The addition of fibres in cement concrete matrix, bridges these cracks and restrains them from opening further, as shown in Fig. 1. In order to achieve more deflection in the beam, additional forces and energies are required to pull out or fracture the fibres. This process, apart from preserving the integrity of concrete, improves the load-carrying capacity of structural member beyond cracking. This improvement creates a long post-peak descending portion in the load deflection curve as shown in Fig. 2. Reinforcing short discontinuous fibres have the advantage, however, of being uniformly mixed and dispersed throughout the concrete.

Plastic shrinkage occurs when surface water evaporates before the bleed water reaches the surface. Polypropylene fibres reduce the plastic shrinkage crack area due to their flexibility and ability to conform to form. The addition of 0.1% by volume of fibres is found effective in reducing the extent of cracking up to 90%. The extent of crack reduction is proportional to the fibre content in the concrete.

Small addition of polypropylene fibres in concrete reduces the flow of water through the concrete matrix by preventing the transmission of water through the normal modes of ingress. The implications of these qualities in concrete technology with polypropylene fibre additions are that cement hydration will be improved, separation of aggregate will be reduced and the flow of water through concrete that causes deterioration from freeze/ thaw action and rebar corrosion will be reduced, creating an environment, which will enhance durability of high rise structures.

In high-rise buildings, heat penetrates the concrete resulting in desorption of moisture in the outer layer. Moisture vapours flow back towards the cold interior and are reabsorbed into voids. Water and vapour accumulate in the interior, thereby increasing the vapour pressure rapidly causing cracks and spalling in the concrete. The polypropylene fibres melt at 160°C, creating voids in the concrete. The vapour pressure is released in newly formed voids and explosive spalling is significantly reduced as shown in Fig. 3. 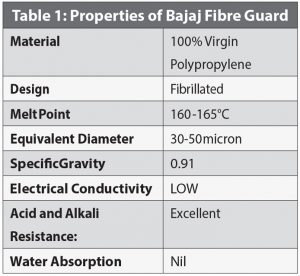 Before mixing the concrete, the fibre length, amount and design mix variables are adjusted to prevent the fibres from balling. The aspect ratio for the fibres are usually restricted between 100 and 200, since fibres, which are too long tend to ‘ball’ in the mix, and create workability problems. As a rule, fibres are generally randomly distributed in the concrete; however, placing of concrete should be in such a manner that the fibres become aligned in the direction of applied stress which will result in even greater tensile and flexural strengths. There should be sufficient compaction so that the fresh concrete flows satisfactorily and the PP fibres gets uniformly dispersed in the mixture. The fibres should neither float to the surface nor sink to the bottom in the fresh concrete. Chemical admixtures are added to fibre-reinforced concrete mixes primarily to increase the workability of the mix. Air-entraining agents and water-reducing admixtures are usually added to mixes with a fine aggregate content of 50% or more. Superplasticizers, when added to fibre-reinforced concrete, can lower water-cement ratios, and improve the strength, volumetric stability and handling characteristics of the wet mix.

Polypropylene fibres are used in two different ways to reinforce cementitious matrices. One application is in thin sheet components in which, polypropylene provides the primary reinforcement. Its volume content is relatively high exceeding 0.5%, to obtain both strengthening and toughening. In other application, the volume content of the polypropylene is low, less than 0.15% by volume, and it is intended to act mainly as secondary reinforcement for crack control, but not for structural load bearing applications. The performance and influence of the polypropylene fibres in the fresh and hardened concrete is different and therefore, these two topics are treated separately.

The slump values decrease significantly with the addition of polypropylene fibres. The concrete mixture becomes rather clingy, resulting in increasing of the adhesion and cohesiveness of fresh concrete. During mixing, the movement of aggregates shears the fibrillated fibres apart, so that they open into a network of linked fibre filaments and individual fibres. These fibres anchor mechanically to the cement paste because of their large specific surface area. The concrete mixture with polypropylene fibres results in the fewer rate of bleeding and segregation as compared to plain concrete; this is because the fibres hold the concrete together and thus, slow down the settlement of aggregates. Due to its high tensile and pull-out strength, the PP fibres even reduce the early plastic shrinkage cracking by enhancing the tensile capacity of fresh concrete to resist the tensile stresses caused by the typical volume changes. The fibres also distribute these tensile stresses more evenly throughout the concrete. As the plastic shrinkage cracking decreases, the number of cracks in the concrete under loading is reduced. If shrinkage cracks are still formed, the fibres bridge these cracks, reducing at the same time their length and width. Moreover, as the rate of bleeding decreases, the use of polypropylene fibres may accelerate the time to initial and final set of the concrete as this leads to a slower rate of drying in the concrete. 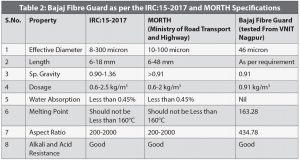 Innovations in concrete technology and construction design engineering, which often call for new building materials, have made polypropylene fibre-reinforced concrete applications. In the past several years, an increasing number of constructions have been taken place with concrete containing polypropylene fibres, such as foundation piles, pre-stressed piles, piers, highways, industrial floors, bridge decks, facing panels, flotation units for walkways, heavyweight coatings for underwater pipe, etc. This has also been used for controlling shrinkage and temperature cracking.

Due to enhance performances and effective cost-benefit ratio, the use of polypropylene fibres is often recommended for concrete structures. Polypropylene FRC is easy to place, compact, finish, pump and it reduces the rebound effect in sprayed concrete applications by increasing cohesiveness of wet concrete. Being wholly synthetic, there is no corrosion risk. The use of PFRC provides a safer working environment and improves abrasion resistance in concrete floors by controlling the bleeding, while the concrete is in plastic stage. The possibility of increased tensile strength and impact resistance offers potential reductions in the weight and thickness of structural components, along with reducing the damage resulting from shipping and handling.