All three islands have similar palm-shaped structures, although the size of each varies. Nonetheless, they all follow more or less the same state-of-the-art engineering and construction procedures. The three islands share their date palm tree form with a spine, fronds, and a long trunk, a crescent shaped breakwater, sub-sea vehicular tunnel and monorail, sub-sea horizontal directional drilling (HDD) crossings on both eastern and western ends of the site, and pies on each side of crescent. 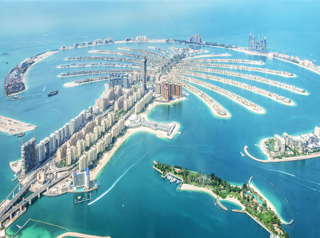 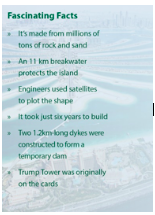 Stretching 5 km into the Arabian Gulf and shaped like a date palm, Palm Jumeirah is Dubai’s self-styled ‘eighth wonder of the world’. The over-the-top emirate is not just blowing its own trumpet though; this man-made island is one of the most audacious engineering projects ever undertaken.

Palm Jumeirah, in particular, has 17 fronds and a 1.5 km long trunk.  The Palm, Jumeirah measures 5 km², has created 560 ha of land and has added 78.6 km to the country’s 72 km coastline. This is the biggest man-made island in the world and can even be seen from space.

The construction of Palm Jumeirah began in August 2001, and is considered one of the world’s biggest undertakings. Unlike other previously man-made islands that are built from metal and concrete, Dubai’s Palm Islands are made from all natural materials – rock and sand upon Prince Sheikh Mohammed Bin Rashid Al Maktoum’s request. Although Palm Islands are artificial islands, the prince desired for a natural appearance that would blend into existing surroundings.

Construction workers lived on the fronds and in anchored cruise ships while building the island.

At the peak of construction, 40,000 employees were working on the project each day, turning 94 million m3 of sand and 7 million tons of rock into a leisure and lifestyle resort fit for the 21st century and beyond. Although five workers were swept away by a wave and one drowned, the designers at Nakheel believe the breakwater will protect the palm island from average gulf weather and even an enormous storm. They even suggest that villas barely 10 feet above sea level will be safe from the rising seas of global warming.

The palm islands are constructed from sand dredged from the sea floor. Palm Jumeirah is made from 3,257,212,970.389 cubic feet of ocean sand vibro-compacted into place. Vibro-compaction increases the density of loose sand by saturating it with jets of water and vibrating it with probes.

To get the complex shape just right, designers and contractors used Differential Global Positioning Systems (DGPS) to plot the palm and ensure the sand placement within 0.39 of an inch.

Palm Jumeirah is packed with villas and hotels. The buyers are a mixture of long-term residents, vacationers and speculators hoping to cash in on skyrocketing prices. 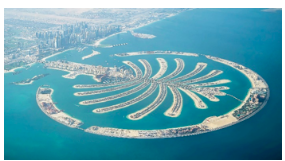 Divers surveyed the seabed and the workers constructed a crescent-shaped breakwater from blasted mountain rock. The Crescent of Palm Jumeirah stands a little more than 13 feet above low tide sea level and sits in 34 feet of water at its deepest point.

The breakwater crescent of Palm Jumeirah is about 11 km long and 200 m wide in cross section. It stands over 13 feet above low tide sea level and sits in 34 feet of water at the deepest point. The crest of the breakwater is 3-4 m above mean sea level. The seaward slope is one in two. The composition of the breakwater consists of coarse sand, quarry run, and 5-6 tonnes of sand. The seaside breakwater is protected by rubble mound armour. The lowest layer of the breakwater is filled with sand. Rocks weighing one ton were placed on top of the sand followed by two more layers of rocks.

A “toe” placed by a floating crane sits inside the Crescent. The breakwater also has two 328-foot openings on each side to eliminate stagnation in the 16 narrow, deep channels. These gaps allow water to completely circulate every 13 days. According to the Case Study No.1 Design of Palm, this is slightly different than the estimated average renewal times in another article, which stated at 10.1 days. The fact that the latter estimate was derived during the construction period can explain the different results. Water circulation around the fronds and open sea is critical for marine life, supply of oxygen and the removal of pollution. Furthermore, there is a retaining wall between the Crescent and fronds. Another layer of rock is placed in front of the wall to reduce overtopping quantity.

The next step was the land reclamation, which although extensively managed in countries such as the Netherlands, had never been attempted on this scale. The elliptical shape of The Palm also made accuracy difficult when placing the sand. As there were no fixed points of land to survey from, no place to ‘drive a stake in the ocean’, there had to be some other means of locating the positions to place the materials.

The engineers found their solution in DGPS, which allowed them to check the accuracy of the placement to within 1 cm. The sand – all 94 million m3 of it – was taken from the sea, not the Dubai deserts (7 million tons of rock also went into producing the first ever ‘curved’ breakwater).

Once dredged it was then vital to ‘settle’ the sand before it was built on – a natural process which normally takes millions of years. To build on unsettled land can lead to slippage – the Tower of Pisa being a good example. So, to hasten the settling, the sand underwent a process called vibro-compaction, which should mean there is no settlement greater than one inch in the next 50 years.

With the land reclaimed, the next step was to prepare it for occupation, with the installation of desalination plants, state-of-the-art vacuum sewerage wastewater treatment, underground power lines and the construction of a transport network including a monorail.

The transport network was designed following three in-depth surveys by leading traffic consultant MVA. These resulted in an extensive road network, with a connection to the mainland by a gateway bridge, two bridges with five lanes in each direction and a six-lane underwater tunnel connecting the spine to the crescent (1.4 km long, 40 m wide and 25 m below sea level).

The Palm Monorail is fully automatic and driverless (although manned by an attendant) and has been developed by a consortium led by the Marubeni Corporation. The system carries up to 2,400 passengers an hour in each direction in four separate trains, each made up of three cars. The system transports a maximum of 6,000 people in nine vehicles.

The sub-sea vehicular tunnel and monorail connect the spine tip to the crescent and help facilitate utility services to hotel and leisure developments on the crescent. Six sub-sea HDD crossings are built at the eastern and western ends of the sites. The eastern crossing from Frond D to the crescent is 580 m in length at water line, with an average boring length of 680 m, while the western crossing is 700 m long at the water line with an average boring length of 800 m. In order to gain experience, Al Naboodah Engineering Services, the company in charge of installing 12 HDD crossings and 2 micro tunnels for electricity cable installation decided to first build the shorter eastern crossing. The pipes, located at a depth of 13 m to 16 m below the seabed in water depth ranging from 7 m to 14 m, provide for drinking water, telecommunications, wastewater and the discharge of treated sewage. 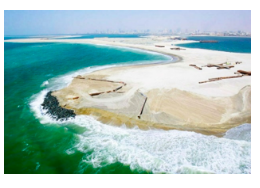 The main challenges of the installation of sub-sea horizontal directional drillings on Palm Jumeirah specifically, was that there were close spacing between the bores (holes), changing soil conditions along the drilling alignment (fill/rock) and brackish (slightly salty) groundwater. To resolve the second problem, vibro-compaction technologies were used just like in the case with sand in the palm’s fronds themselves.

Besides the scientific challenges to this construction project, another challenge was the pressure to finish the islands in such a limited amount of time – 3 years. In order to keep ahead of schedule, the company constructing the islands, decided to start laying the sand foundation under the sea. Yes, time constraints forced both companies – the one constructing the breakwater crescent, and the one constructing the islands to complete both structures simultaneously. However, eight months into the project, it wanted to bring them above sea level. In April 2002, after 550 m of the breakwater crescent was completed, the company finally brought out the fronds. 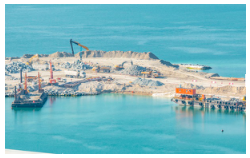 The construction of the Dubai Palm Islands has had a significant impact on the surrounding environment, resulting in changes to area wildlife, coastal erosion, alongshore sediment transport and wave patterns. Sediment stirred up by construction has suffocated and injured local marine fauna and reduced the amount of sunlight, which filters down to seashore vegetation. Variations in alongshore sediment transport have resulted in changes in erosion patterns along the UAE coast, which has also been exacerbated by altered wave patterns as the waters of the Persian Gulf attempt to move around the new obstruction of the islands.