A unique combination of floating bridge and cable-stayed bridge.

The Nordhordland Bridge is a combined cable-stayed and pontoon bridge which crosses Salhusfjorden between Klauvaneset (in Bergen Municipality) and the island of Flatøy (in Alver Municipality) in Vestland county, Norway. It is 1,614 metres (5,295 ft) long, of which the pontoon section is 1,246 metres (4,088 ft) long. The cable-stayed section consists of a single 99-metre (325 ft) tall H-pylon, which has a length of 368 metres (1,207 ft) and a main span of 172 metres (564 ft). This allows for a clearance of 32 metres (105 ft).

The floating section is a steel box girder bridge with ten pontoons, which because of the fjord’s depth are not laterally anchored. The roadway sits on an orthotropic deck. The pontoons and the cable-stayed bridge are built in concrete, with the main span being supported with 48 cables. The fjord end of the main span is supported by a 30-metre (98 ft) deep foundation, where the two bridges meet. From there and for 414 metres (1,358 ft), the roadwall has a 5.7 per cent gradient on a viaduct anchored to the pontoon bridge.

The bridge carries two lanes of European Route E39, also called the Coastal Highway, and one pedestrian and bicycle path, and connects the district of Nordhordland to Bergen. Plans for a bridge had existed since the 1960s, and after the decision to construct the bridge was passed by the Parliament of Norway in 1989, construction started in 1991. Total costs, including auxiliary roads, was NOK 910 million. Part of the contract payment was subject to a court case, which the contractors lost. The bridge opened on 22 September 1994 and remained a toll road until 31st December 2005. In 2014, it had an average daily traffic of 16,580 vehicles. The bridge is the second-longest in Norway, and the second pontoon bridge in Norway.

The technology for the bridge is based on recent technology for pontoon bridges combined with Norwegian offshore technology. The box girder bridge and the orthotropic deck were chosen because it gave the lower material use. Conventional pontoon bridges have lateral anchorage systems, which fasten the bridge to the seabed. The technique had previously been used down to 140 metres (460 ft), but Salhusfjorden is 500 metres (1,600 ft) deep, making the method prohibitively expensive. The choice of a cable-stayed section allowed reduced traffic hazards in storms, a reduction in corrosion on the bridge deck, and improved passage of water beneath the bridge in support of wildlife.

The contract for construction of the pontoon bridge was awarded in August 1991 to a consortium, Arbeidsfellesskapet Salhus Bru, which consisted of Norwegian Contractors, Aker Entreprenør, Veidekke and Kværner Eureka. The components were built in Moss and Fredrikstad and then shipped to Lonevågen, a branch of Osterfjorden, which was suitable to connect the parts.

On 26 January 1994, the steel frame that would be used to fasten the pontoon bridge to the cable-stayed bridge, came adrift during transport in Skagerrak, and was severely damaged, causing a delay in the project. As the bridge had the longest laterally unsupported span in the world, the construction was watched by many international delegations.

The bridge consists of three sections, a cable-stayed bridge, a pontoon bridge, and a viaduct, which connects the two. The cable-stayed bridge consists of a 99.3-metre tall H-pylon with a foundation at Klauvaneset on the mainland of Bergen. It supports a 172-metre main span, with the other end being fixed in a foundation 30-metre below mean sea level, which is anchored in the ridge Klauvaskallen.

The whole cable-stayed bridge is 369 metres long, with a 190-metre long viaduct, supported by six pairs of pillars. The cable-stayed bridge allows for a sailing channel which is 32 metres tall and 50 metres wide. The main span is built in lightweight LC55 concrete, while the viaduct and pylon are built with conventional C45 concrete. Inside the pylons is a 1.6 m x 2 m hollow area.

The bridge has 48 cables, 12 on each side of the pylon on each side of the roadway. The distance between the cables is 12 metres on the main span, and 9.33 metres on the viaduct. Combined, the cables are 4,432 metres long; each cable consists of 67 to 230 twined cables, each with a 7-millimetre diameter. The cables have a weight of between 1.5 and 14.5 tonnes each, and they have a capacity of between 1,960 and 7,910 kilonewtons. They can be tightened at the connection with the roadwall.

The floating section consists of a steel box girder placed on top of ten floating pontoons. The pontoon section is anchored only at both ends, on the underwater foundation at Kauvaskallen and on Flatøy. It is fastened using flexible plate connections fastened by bolts and cables under tension. These are flexible around the horizontal axis at right angles towards the axis of the bridge, allowing for deformation caused by the tide. The fastening on Flatøy consists of a massive concrete block 22 m x 20 m long and 14.5 metres tall, which was poured into a blast-out foundation pit in bedrock. Vertical pretension rock anchors have also been installed, with 12 at Klauvaskallen and 14 at Flatøy, giving 42 and 44 meganewtons of support, although they were only built to increase the safety factor.

There are ten lightweight concrete pontoons, with 113.25-metre spans between them. The pontoons are between 7 and 8.6 metres in height. The draught varies between 4.3 to 5.6 metres. Each pontoon consists of nine watertight cells which are partially filled with ballast for trim. The cells are dimensioned so two adjacent cells can fill with water without endangering the bridge.

The two bridges are connected with a 414.5-metre long steel viaduct, which runs on top of the floating bridge, bringing the road from 11 to 34.4 metres above mean sea level. The viaduct weighs 1,600 tonnes and has a gradient of 5.7 degrees. It consists of spans between 18 and 33 metres, with the roadway also built as an orthotropic deck with 12-millimetre thick plates. Overall, the construction of the bridge used 24,000 tonnes of concrete, of which 10,000 tonnes in the pontoons. The bridge was coated with 40,000 litres of paint.

The bridge is monitored by 132 sensors, including sensors on hatches to the pontoons, on doors to the steel box girder, for corrosion, strain gauges on the girder and on flexible elements, and weather information. On the cable-stayed section, the bridge is marked with navigation lights, as well as the centre of the sailing area having a racon. The bridge is the second-longest bridge in Norway, behind the Drammen Bridge. 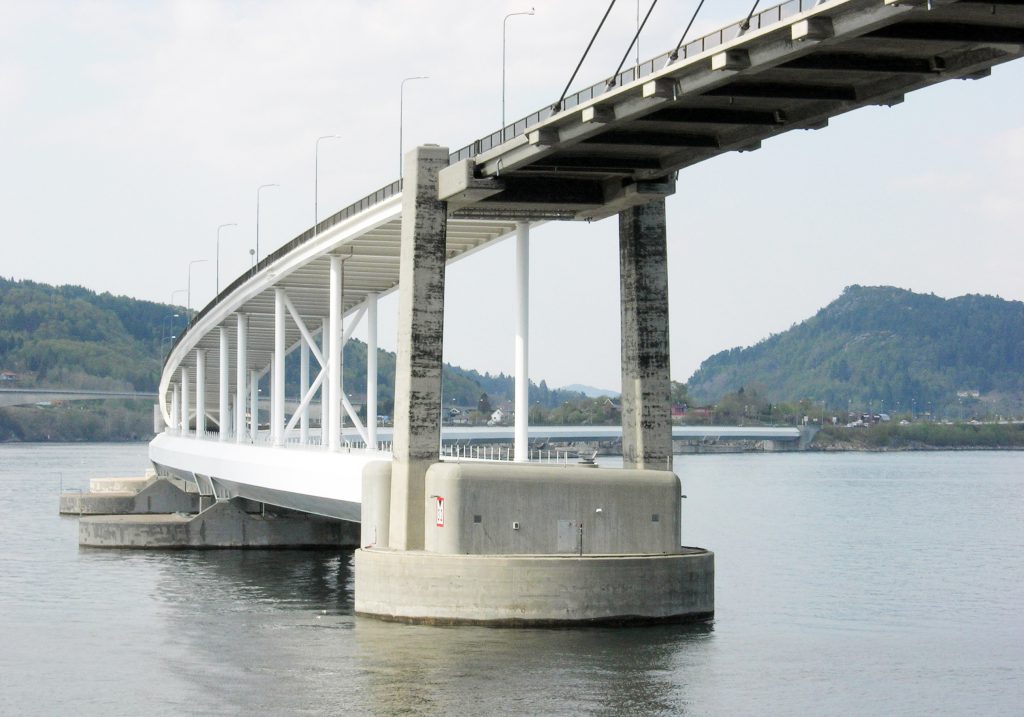 The use of high-strength steel caused problems, as it was necessary to heat the steel to 150°C (302°F) before and after welding, and Kværner had problems finding an adequate process during late 1992. In January 1993, an appropriate process had been found, although experimentation with various methods continued for another six months. Kværner felt that the Public Roads Administration should bear the extra costs, demanding NOK 108 million in compensation, but the administration denied this, resulting in a lawsuit. Both sides appealed to Gulating Court of Appeal, which on 18 February 1998 refuted all of Kværner’s claim regarding the steel boxes and sentenced the administration to pay NOK 7.5 million. In addition, Kværner had to pay the administration NOK 19.5 million in penalties for overrunning the contract date. The plaintiff appealed to case to the Supreme Court, who unanimously confirmed the ruling of Gulating Court of Appeal. In addition, the plaintiff was sentenced to pay the defendants legal costs of NOK 910,000.