Polypropylene fibres were first suggested as an admixture to concrete in 1965 for the construction of blast resistant buildings for the US Corps of Engineers. These fibres have subsequently been improved further and at present, they are used either as short discontinuous fibrillated material for production of fibre reinforced concrete, or as a continuous mat for production of thin sheet components. The use of these fibres has increased tremendously in construction of structures because addition of fibres in concrete improves the toughness, flexural strength, tensile strength, impact strength, as well as failure mode of concrete. Further, polypropylene twine is cheap, abundantly available, and like all manmade fibres of a consistent quality.

The polypropylene fibres claim contribution to the concrete performance subjected to crack opening and slippage. Furthermore, the fibres reinforce the performance under not only compression, flexure, and tension, but also under impact blows and plastic shrinkage cracking. 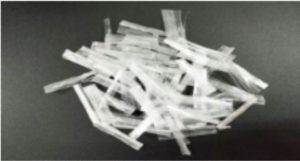 We introduce ourselves as manufacturers of Bajaj Fibre Guard Micro Synthetic Fibrillated Fibres. It can be used effectively in Industrial Flooring, Canal Lining, Metro Concrete Structures, Concrete Roads, Basement Slabs, Dams along with Steel Rebars to enhance tensile performance in comparison to the ordinary RCC. The application of these fibres in construction increased largely because the addition of synthetic Fibrillated fibres in concrete improves the tensile strength, flexural strength, toughness, impact strength. Polypropylene fibres are used in dosage of 0.6-2.5 kg/m3 (IRC:15-2017) for infrastructure projects and precast concrete. 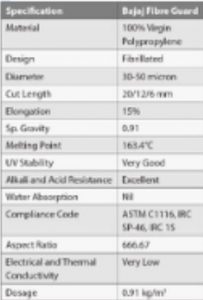 The inclusion of PPF Fibre within a concrete mix or cementitious mixes will control shrinkage cracks. It has been tested for all its major properties as per its standardization by IRC, MORTH and approved Indian engineers, consultant and authorities for use in their projects.

PP Fibres for Waterproofing Coating is chemically surface treated 100% Virgin high tenacity polypropylene fibre based concrete additive and is available in graded lengths for use in water retaining slabs/structures. This is to be used as micro reinforcement at minimum of 0.9 kg/m3 of concrete.

The key actions of Fibre Guard are as follows:

The applications of PP Bajaj Fibres Guard are as follows:

We have successfully supplied Bajaj Fibre Guard in:

The Bajaj Fibres Guard eliminates shrinkage cracks in concrete. Its addition in concrete improves its mechanical properties. The high tensile strength as a result of Fibre Guard can improve the capacity of the concrete and can control the volume changes with time. It is concluded that inclusion of PP fibres increased split tensile strength by around 20%. Also, the strength enhancement in flexural strength is 24% and modulus of elasticity is 11%, as compared to that of conventional concrete.