India’s road system has grown rapidly over the past decades, and it continues to expand. The contribution by M/s. TAISEI INTERNATIONAL through their INTERNATIONALLY RECONGONISED PRINCIPALS have introduced several latest art of technology, Non destructive, Non nuclear, on- spot testing, measuring, quality control, road safety & surveying instruments, which are regarded as global leaders in their respective product categories.

This introduction enabled the infrastructure industry to keep phase with the volume of work without any sacrifice on the QC /QA.

MIT-SCAN2-BT is the new introduction by M/s. TAISEI INTERNATIONAL together with their German principals M/s. MIT Mess- und Prüftechnik GmbH which has been successfully field assessed and is likely to be an indispensible equipment for both execution as well as quality control officials.

The geometrically increasing thousands of kilometers of new concrete roads are the lifelines of a growing economy. Their long durability – based on high quality paving – is essential for the effectiveness of the young road network and an indicator of the capabilities of the Indian construction industry.

But quality in road construction is no coincidence and can be measured comprehensively, objectively and reproducibly using modern electronic measuring systems. The aim of contracting authorities is to improve the road quality in terms of sustainability, safety and cost-efficiency in construction and maintenance. This is increasingly reflected in their demand for additional quality documentation. Construction companies, on the other hand, face increasing challenges regarding speed of construction, cost effectiveness and quality requirements. 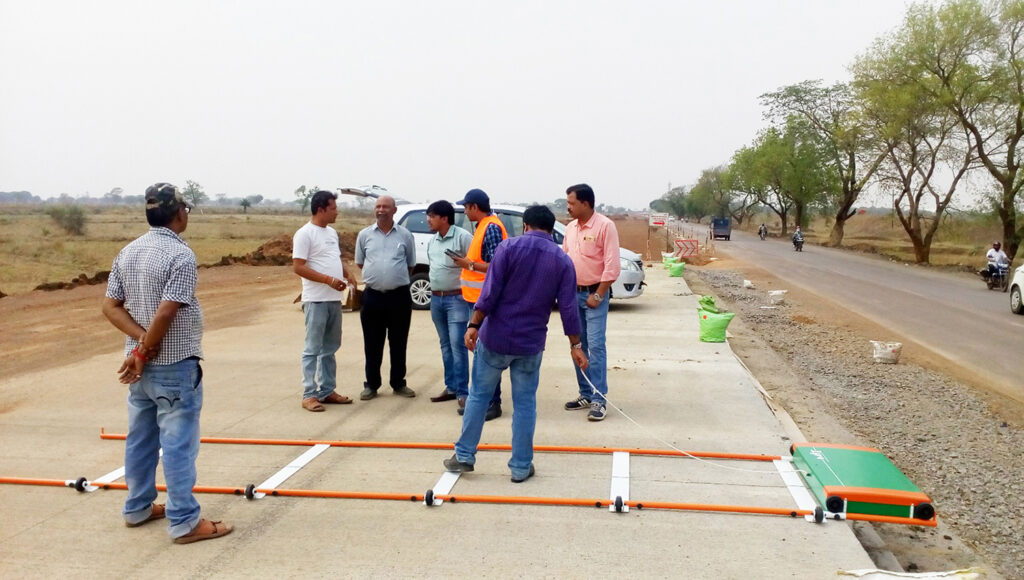 Joint zones, in particular, are critical areas with regard to the durability of a road. As the joints absorb the movements of contracting and expanding concrete slabs as well as the load of the traffic, they are exposed to stresses and strains. Dowels are embedded in concrete pavements to transfer the load across the joints and reduce their faulting. The proper alignment of dowel bars is critical to ensure the long-term intactness of the joint zone. If the bars are not adequately centered under the joint saw cut, the bars may not be effective in providing load transfer. Misaligned bars can lock up the joints and prevent them from opening and closing freely.

A dowel position scanner of the German manufacturer MIT Mess- und Prüftechnik GmbH(MIT) addresses the need to verify the placement accuracy of dowel and tie bars in concrete highways. MIT develops non-destructive measurement systems used for quality assurance in road construction. The company advances its NDT systems continuously to meet the increasing requirements of quality testing. Thus it has become a reliable partner of the construction industry around the world. 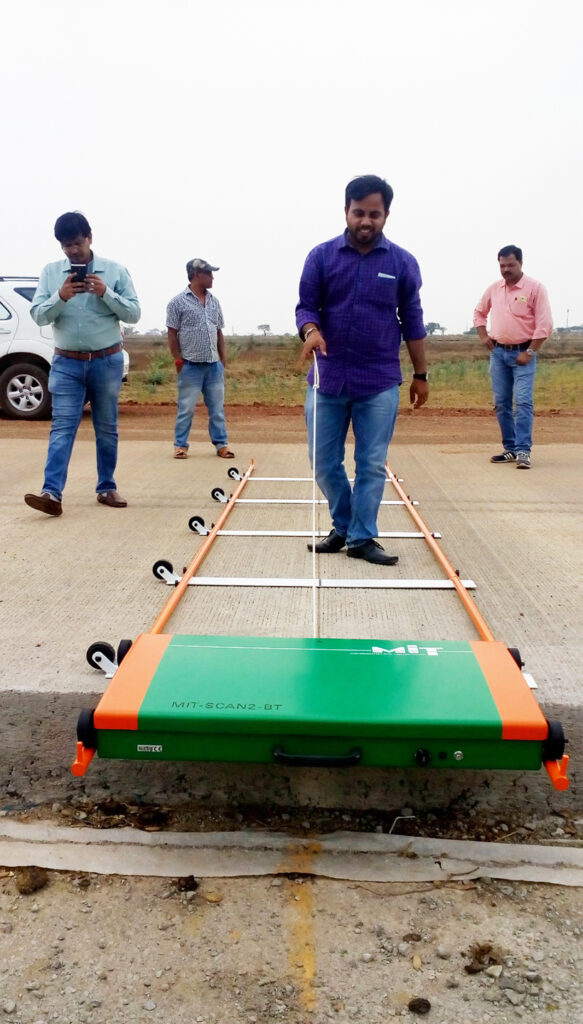 The dowel position measurement system MIT-SCAN2-BT was introduced in India in 2016 and provides the rapidly advancing Indian road construction with a fast, comprehensive and non-destructive method for the assessment of dowel positions.

Dowel position testing can be used for the self-monitoring of contractors as well as the quality assurance for acceptance purposes. Requirements for the acceptance are shown in ASTM E3013/E3013M-15, in various national standards, and since 2017 in the fifth revised version of the Indian Code of Practice for Construction of Jointed Plain Concrete Pavements (IRC:15-2017).

The dowel position scanner operates on the basis of pulse induction method. The device makes use of the magnetic properties of the dowel bars. By means of a pulsating magnetic field, it induces eddy currents in the bars. The resulting electromagnetic response field is measured at a fast sampling rate by an array of sensors.

The measurement process is very straightforward. A mobile rail system is placed above the joint to be assessed. The measuring trolley is then pulled over the rails along the joint. It is controlled via a mobile computer that communicates wirelessly with the measuring device. During the measurement run, the computer displays the signal received and the distance covered. Due to automated signal analysis, the number of dowels as well as their spatial position and orientation are determined within a minute.

Different parameters that describe the deviation of a bar from its prescribed positions – namely the depth deviation, the lateral translation, the vertical and the horizontal rotation – are computed with a tolerance of just a few millimeters. Thus this testing equipment is not only easy to operate, fast and non-destructive but also highly accurate and therefore altogether very economical.

This becomes particularly clear in comparison with destructive methods such as core drilling that impair the road surface, only allow random measurements and are very expensive to carry out. But also the advantages compared to the non-destructive method, which is based on the reflection of electromagnetic waves (ground penetrating radar), are obvious.

The speed of propagation of the radar waves is influenced by the properties of the concrete, such as moisture, and needs to be determined by the use of a reference drill core before starting measurements or when deviations in the concrete’s properties occur. This severely limits the usability of ground penetrating radar on wet roads and during the curing process. In contrast to this, MIT-SCAN2-BT can be used on walkable ground, shortly after the concrete has been paved and is therefore also useful for the adjustment of the equipment. Thus, the measuring system is also used to improve the dowel bar positions during the paving process. Existing GPR-systems are less specialized in the specific measurement task and offer therefore merely time-consuming, non-automatic analyses, whereby the lateral displacement of the dowels cannot be calculated. 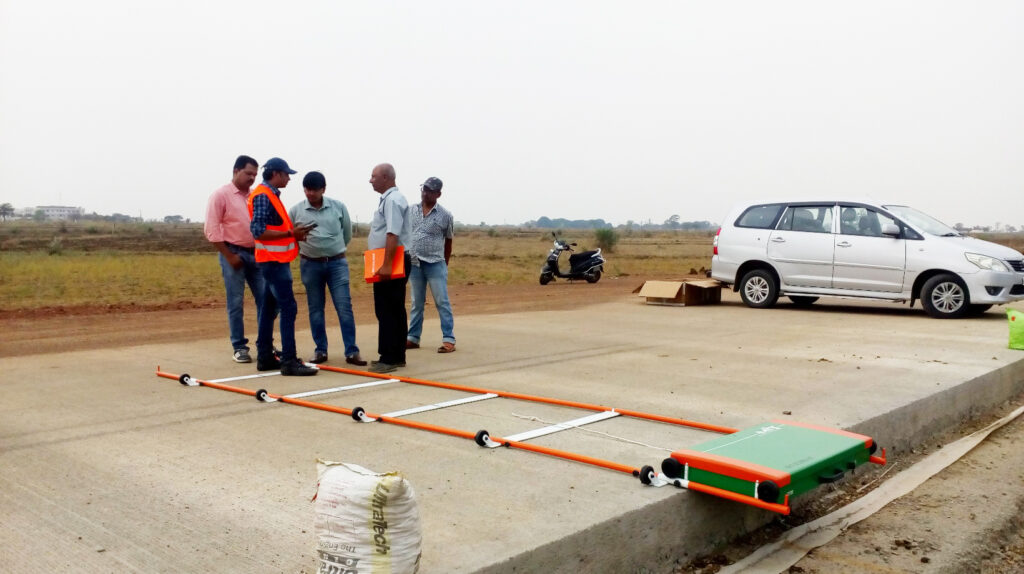 Parameters such as the lateral translation of the dowels are quite important. Installation errors, which experience has shown to be frequently observed, are joint cuts that do not coincide with the center of the dowels. The consequence of a faulty joint cut is the uniform lateral displacement of all dowels in relation to the cut joint. Another typical installation error are alternating depths that arise in connection with the compaction of the concrete and in connection with its consistency. The detection of such systematic incorrect positions is only possible through the comprehensive, non-destructive measurement of the dowel positions. MIT-SCAN2-BT enables efficient inspections of large road stretches in one workday, which makes it a cost-effective instrument for contractors as well as for authorities.

The pulse induction method has been well-proven in other measuring devices of the German manufacturer, who also developed an instrument called MIT-SCAN-T3 for the non-destructive and accurate measurement of thickness layers in asphalt and concrete pavement like several superposed layers of asphalt pavement as well as unbound courses of the lower pavement structure (frost protection layer and aggregate base layer). Areas of use include new road construction, sub-base construction as well as pavement inspection and rehabilitation of existing roads. However, a prerequisite is the installation of a standard metallic reflector made of aluminum or steel at the base of the pavement layer to be measured. It serves as an antipole. Layer thickness can be determined directly during paving (self-monitoring) or later as part of control inspections (external monitoring) performed for acceptance of construction work and calculation. To conduct a measurement, the MIT-SCAN-T3 is simply pushed over the measuring site. Within seconds, it accurately determines layer thickness. This way, based on a larger number of measuring sites, pavement thickness can be measured extensively and effectively. In Germany, MIT provides interfaces for the inclusion of layer thickness data in a cloud-based building information management. In this way, it participates in the optimization and automation of building processes, and thus, the future requirements of road construction can be met already today.