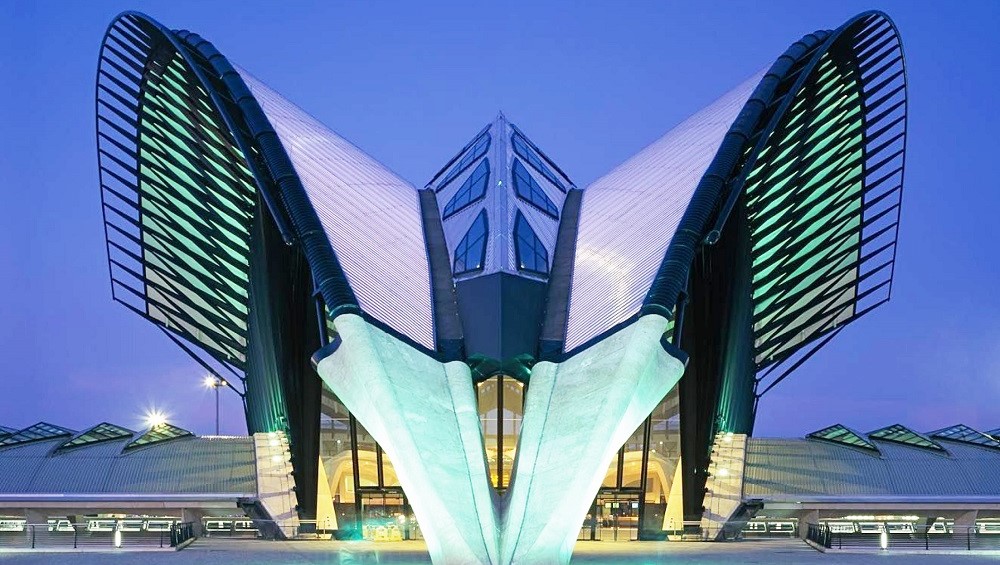 Lyon–Saint Exupéry Airport, earlier known as Lyon Satolas Airport, is an international airport situated in Lyon, the third largest city in France. It’s the chief transport facility for the entire Rhône-Alpes region. The airport is directly connected to the railway station near Lyon called the Gare de Saint-Exupéry TGV – situated 30 km to the south, which was an addition to the airport built to serve TGV trains on the LGV Rhône-Alpes, part of the main line running from Paris to Marseille.

Saint-Exupéry station was designed by Santiago Calatrava – an architect, sculptor, and structural engineer, who worked as an engineer and began to enter architectural competitions. The station was built between the years 1989-1994, and opened on 3 July 1994. The construction cost around 750 million Francs (roughly 146 million USD).

The building is mostly a combination of concrete and steel. Its design resembles a bird at the point of flight with the two main “wing” arches coming together at the bird’s “beak”. The station is broadly thought of as a symbol of a bird, fitting to the theme of flight at the airport. The dramatic form of the 5,600 square meter railway station is envisioned as a symbolic gateway to the region of Lyon.

Large entry gallery is distinct and serves to subdivide travelers and serve as an entry marker connecting Train and Airport programs. The hall comprises ticket offices, retail shops, restaurant facilities and access via elevated galleria to and from the airport.

People have different experiences walking through the station based on their destinations, either the railroad below ground or the airport above.

The triangular central hall, traversing 394 feet, sweeps upward toward a service concourse on the east side and so is left free of visual obstructions.

The steel roof is composed of four converging arches with a curved, tapering, arched spine – connected to an isolated reinforced concrete foundation. A single, sculpted, V-shaped concrete footing supports the arches at their point of convergence on the west. Glazed side screens fill the area between the central, concrete arches of the platform hall and the two outer steel arches of the concourse roof, stabilizing the structure.

The outer steel arches are connected to the foundation through a concrete housing. Whereas, the inner steel arches are supported by concrete shear walls on one side and a housing on the other. Concrete casing at the joints makes the structure rigid.

Calatrava used steel and glazing to achieve a sense of lightness and openness in the gallery.

The soil is generally granite and a mixture of shingle with clay and layered stones on the hillsides. This mixture makes the soil condition stable which helps support the structure, hence, allowing the foundation to be relatively simple. The isolated concrete spread footings is used as the foundation system. The front concrete housing of the main steel arches or the “beak” has a modified pad footing with a saw-tooth base.

Due to the moderate climatic condition of Lyon, France; lateral loading is not an extreme design concern. As this area is subject to cold winds from the Alps and warm breezes from the Mediterranean, there is no extreme wind or snow loads.

France being a part of Eurasian tectonic plate, it is rare for Lyon to experience earthquakes that cause significant damage. Though seismic loading is negligible, but not totally absent.

Lateral loads are applied to the face of the glazing and create a high pressure region between the glazing system and the cantilevered roof portion.

The high pressure region causes uplift and an overturning moment about the base of the cantilevered roof portion.

The four cross-braced steel arches and the the exterior trusses resist the lateral load and overturning moment about the base of the façade.

The Rhone Alps Region and CCIL organized a competition to design a new rail station at Saint-Exupéry Airport in Satolas, serving a rail connection to Lyon. This was done in order to help boost trade through improved transportation, The design brief called for a building that would provide smooth passenger flow while creating an exciting and symbolic ‘gateway to the region’.

Together with the air terminal and nearby street, the railway station connects the region’s different transportation systems. 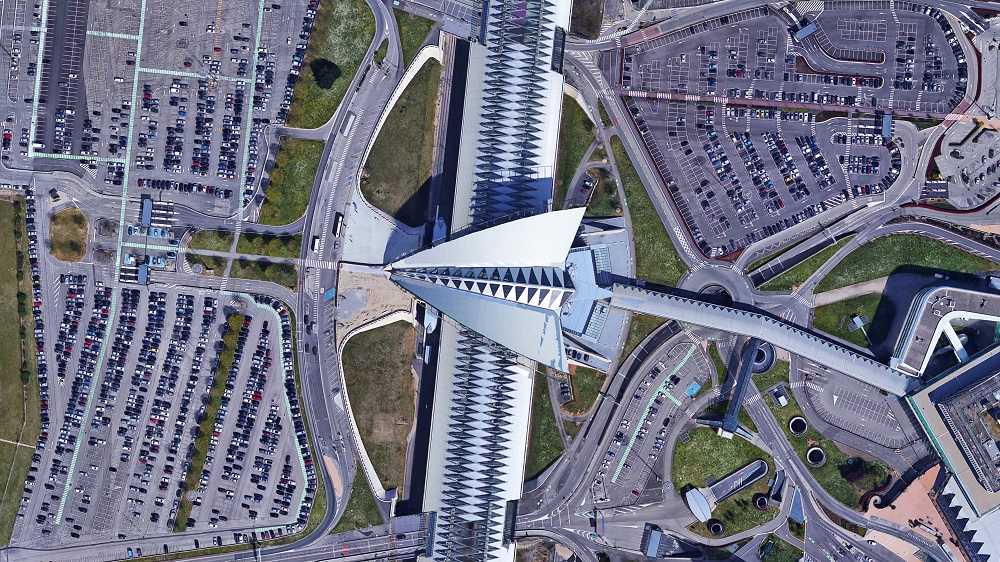