For more than seven decades, Larsen & Toubro has been a pioneer in equipment supply for Road Construction & Highways in India. L&T has been engaged in the entire spectrum of activities right from equipment supply and deployment, construction of roads to maintaining toll-based highways.

Road transport is vital to India’s economy. The Government of India considers road network as critical to the nation’s development, social integration, and security. Ministry of Road Transport & Highways aims to achieve a daily target of 40 km road, which is possible by pushing for increased mechanization and using the best-in-class equipment to deliver safe, serviceable, and sustainable roads. 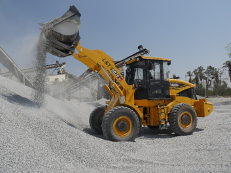 L&T’s focus on road machinery is due to the emphatic role mechanization plays in the faster execution of road construction activity. L&T’s Product Development Centre (PDC) have indigenously designed the machines that are highly suitable for the Indian market. L&T 9020 Wheel Loader was one of the first machines designed by the PDC and has become a popular choice in the loader segment. Over 2,000 machines have been supplied over the years in the Indian market. PDC has the capability to design and develop the machines by integration of structures, hydraulics, electricals, aggregate selection, matching as well as building prototype and validation.

PDC houses state-of-the-art software for enabling designers to accelerate the validation process and prepares products for commercial launch in shorter lead times. L&T 1190 Soil Compactor was developed within 18 months of conception and has undergone the complete cycle of Proto, Pilot Builds, validation, and the field trials. User feedback from the Proto was incorporated into the pilot batch machines. This 11-t soil compactor has already crossed over 1,000 units and is successfully deployed in road projects.

L&T 990 is 10 T Tandem Compactor, designed by PDC, and was launched commercially. This product has advanced design features like the suspended frame design and is the only machine in the Indian market, which houses the engine in a separate rear compartment, making it easy-to-access the engine. The machine has a balanced weight distribution of 5 tonnes each on the front and rear. Over 500 machines have been deployed satisfactorily. L&T 491 Mini Tandem Compactor was developed in a short time of less than 12 months. The machine population has crossed a 300 number mark within three years of its commercial launch.

Another model designed inhouse is the Pneumatic Tyred Roller L&T 2490HD. The prototype has undergone extensive field trials and the machine is on offer for commercial sale. The Pneumatic Tiered Roller helps in sealing the Road surface and can exert a maximum force of 3-t per tyre on the road surface to seal the surface. In a span of 2 years from its launch, 20 units have been supplied in the market.

A new model of Wheel Loader, L&T 9020SX, was also designed and developed by PDC. The model with better torque characteristics and a better cabin has been a machine which brings down the operating cost for the customer. The offtake is very encouraging with more than 300 machines deployed by the customers.

Hydraulic Sensor Paver L&T 5590 is another product, which is designed by PDC and the prototype is undergoing user trials. The Hydraulic Paver is much sought after by the road contractors who need paving as a basic function to be carried out during road laying. The machine is capable of paving up to 5.5 metres.

Other developments include Slope Compactor, L&T SL230 and Bucket Crusher CB 250. These attachments can be fitted to any 20 T Hydraulic Excavator. The Slope Compactor is deployed for compacting embankments and the Crusher Bucket helps in crushing small boulders at site itself.

L&T has the requisite know-how and application expertise in the Indian market that has led them to develop well engineered machines to suit the tough local conditions. L&T’s team of service engineers spread countrywide acquire skills on equipment diagnostics and troubleshooting with hands-on exposure. L&T’s nationwide network of 30 dealers have Parts Depots and local workshops for supporting the machines. The dealers have trained engineers who render the mandatory services promptly.

The machines rolled out by LTCML are fitted with L&T DigiEye, which helps the customer keep a track of the machine parameters remotely and are part of the digitalization efforts. This feature will enable the customers in higher utilization of the machines.

Through its full-fledged service centres situated strategically across India, L&T extends comprehensive care for the working fleet comprising Komatsu, Scania and LTCML machines. L&T undertakes full maintenance contracts and site support agreements for the customers besides equipment overhaul and reconditioning of engines and other components. The service centres are located at Kanchipuram, Bahadurgarh, Durgapur, Nagpur, Pune and Singrauli. L&T’s Central Training Centre in Kanchipuram is accredited by National Skills Development Corporation and is a leading national facility under Pradhan Mantri Kaushal Vikas Yojana for conducting courses for Operators and Mechanics in the construction equipment industry.

Today, L&T Compactors are not only well-established in the local market but have reached overseas market by exporting models to SAARC countries and African nations. Their increased acceptability over the years and their proven performance in various applications are a testimony to the product superiority. These machines have a good acceptance in the Nepal market with the population crossing 100 units. With these high-quality and reliable equipment, L&T contributes effectively in attaining the goal of Aatmanirhar Bharat.