A Landmark for the New Millennium 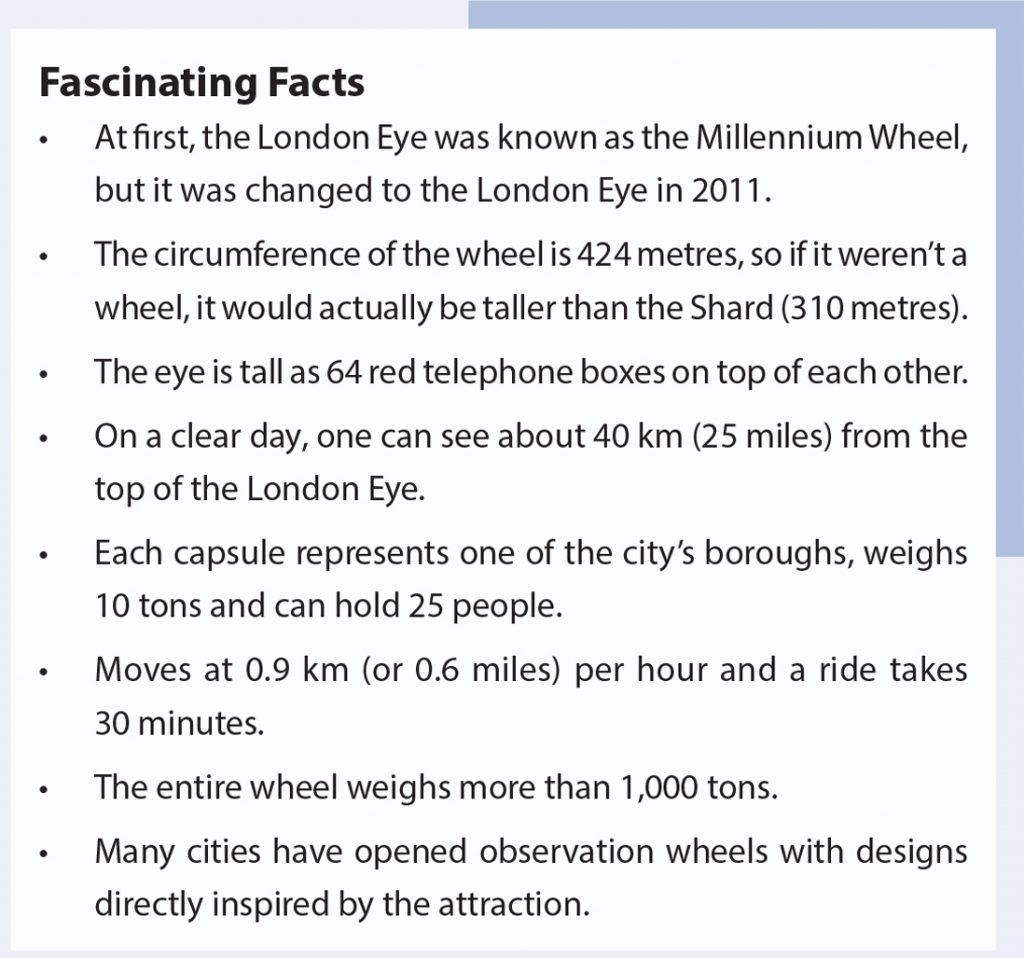 South Bank of the River Thames in the borough of Lambeth. The structure is United Kingdom’s most famous paid tourist attraction:

an admission fee is charged. The London Eye has been accredited with initiating a global resurgence of Ferris wheel construction.

Standing at an overall height of 443 feet (135 metres), the London Eye was the world’s tallest Ferris wheel from its construction in 1999,

the Las Vegas’ 167 metre tall High Roller in 2014. The Eye is described by its operators as ‘the world’s tallest cantilevered observation wheel’,

as it is supported by an A-frame on one side only, unlike the taller Nanchang and Singapore wheels.

The project is depicted as an ‘engineering triumph’ and has done more to raise the profile of construction engineers with the general public at the beginning of this century, than the other initiatives by bodies representing engineering.

The London Eye started off as an entry shared by David Marks and Julia Barfield of Marks Barfield Architects in 1993 to a contest, for a new landmark in London to honour the millennium. The project was largely funded by British Airways.

The main components were built offsite; post this, barges transported them one by one up the River Thames to the construction site on the South Bank. The workers assembled the structure horizontally on a temporary support platform over the river. The hydraulic lifts and cables then slowly raised the 1,322 ton structure over the course of one day, until it reached a 65° angle. Once it was in final position, the 32 capsules were attached to the rim, which took eight days.

The Eye, initially planned to be dismantled after five years, was kept in place owing to the persistent popularity. In 2006, an attractive LED lighting system was also put in to make the wheel more eminent after dark.

The London Eye is an outstanding example of a frame structure. The wheel has a diameter of 394 feet (120 metres) and resembles a bicycle wheel, with a spindle and hub linked to the rim by 64 cables, or spokes, which carry the main structural load from rim to hub. The rim, which has a diameter of 400 ft (122 metres), is an open triangularsection truss, fabricated from several steel tubes welded together.

The wheel is supported by the frame on one side only (cantilevered), and it is the frame that holds the wheel over the river. The 82 ft (25 metres) long spindle is a significant part of the structure. It acts as a single component cantilever carrying the wheel’s self weight (approximately 1,600 tonnes), with the worst storm wind loading (blowing in from the east); this wind nearly doubles the over-turning moment from self-weight. The spindle takes the form of a massive hollow tube of steel made in 8 separate ‘slices’ – 7 from cast steel and 1 from steel plate rolled into a tube.

The wheel’s steel design resembles an ‘A’, with two large pointed legs at the base: 65 feet (20 metres) apart and each over 190 feet (58 metres) long. These legs bend over the river at an angle of 65° (from the horizontal). Further, the six cable backstays anchored to the top of the frame and buried in a concrete foundation on the riverbank involving 40 piles, each 108 feet (33 metres) deep, maintain the frame from tilting into the river. 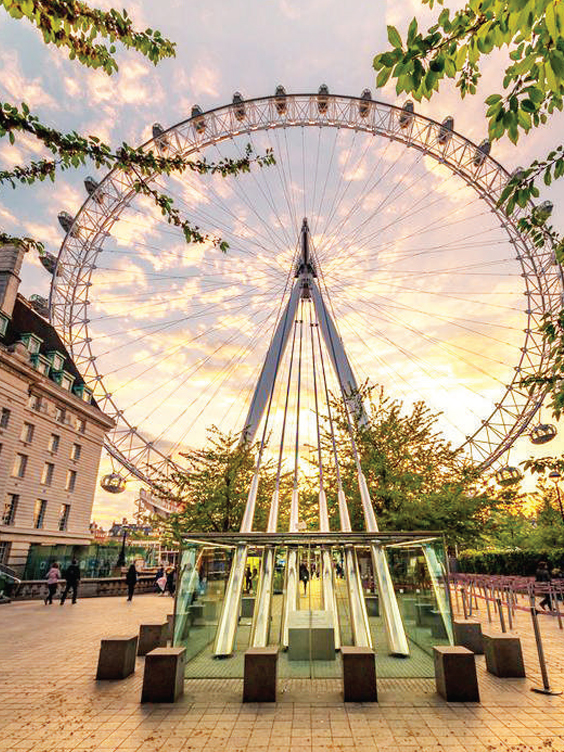 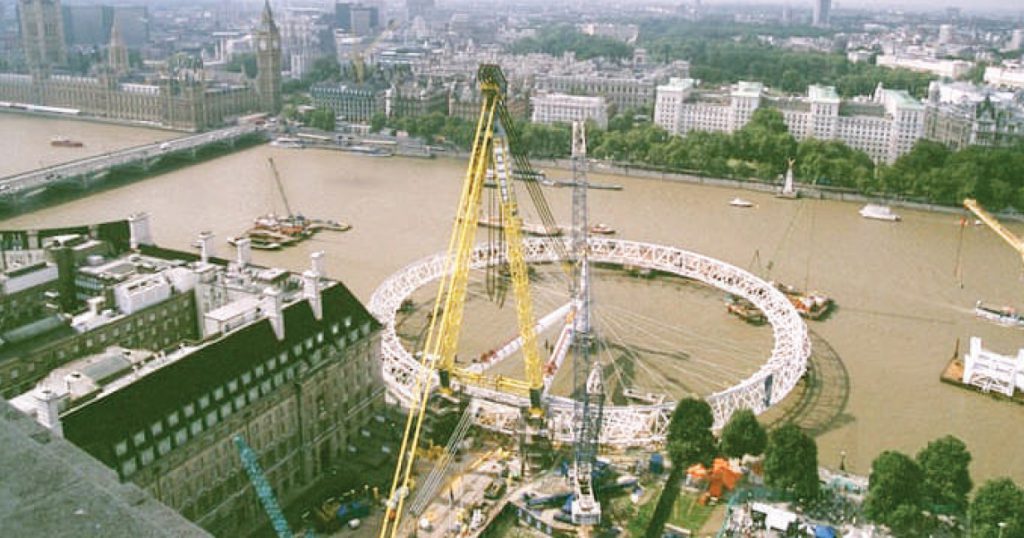 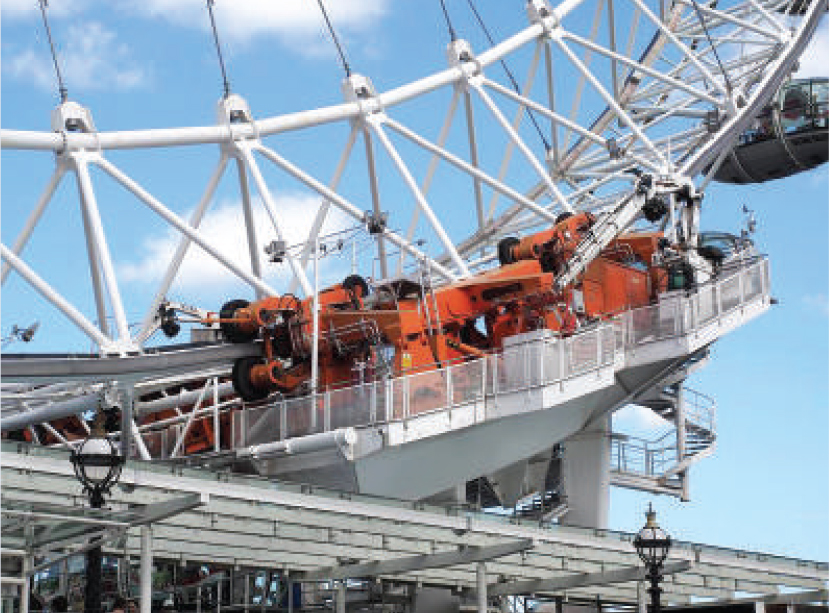 The Eye goes around the hub like the wheel of a motorized bicycle. The hydraulic motors, driven by electric pumps, give energy to rotate the wheel. The power to turn the wheel is transmitted to the rim through rubber tires that are mounted on the base of the structure along the rim of the wheel, which act as friction rollers. The drive systems are positioned in two towers, one at each end of the wheel’s boarding platform. Subsequently, the hydraulic motors turn the tires, and the rotation of the tires turns the wheel. In addition, 16 additional rotation cables are attached to the hub at an opposing angle to ensure there’s no lag between the turning of the rim and the turning of the hub.

The wheel is very light, which makes it defenceless against wind excitation. To neutralize this and restrict any lateral movements that might cause sickness, the rim is installed with 64 mass dampers, which are set to the rim’s natural frequency.

Further, during design, thought was given to the consequences of the main bearing jamming, considering that the rim edge is being driven, and this might lead to a catastrophic damage. To assure against the likelihood, excluding the use of high quality bearings, an acoustical monitoring system has been set up to regularly test the bearing condition.

The technical challenges of the wheel also include, namely:

As part of the paid service for the London Eye, the visitors enter a capsule (8 metres long and weighing 500 kg) on the turning wheel, which ultimately provides a panoramic view of the city from a height of about 415 m. The futuristic looking egg-shaped capsules accommodate up to 25 passengers, and take about 30 minutes for each rotation. These capsules were transported from France by train through the Chunnel.

Though there is a lightweight steel frame forming an underbelly chassis and a basic framework for the exterior skin, the panels of the coated double curvature glass (2 x 6 mm sheets with a 1.2 mm interlayer) provide in-plane stiffness to limit deflections and increase rigidity. The glass panels are prefabricated to a high degree of optical quality and secured to the steel frame with a cured polysulphide based adhesive. Further, the full size panels were load tested in advance, both for impact and ensuring they had the capacity to carry the load from the passenger weight.

A noteworthy accomplishment of design and engineering, the London Eye offered London’s skyline a spectacular addition and has been providing the guests a new perception of London ever since. Originally intended as a temporary structure that would be dismantled and transported to a new location, had planning permission for just five years. But, with millions visiting it each year, its popularity encouraged its lease to be extended. Today, it is a permanent fixture on the London skyline and a beautiful icon of modern London.