The proven combination of positive and non-positive connections in a rapid and bolt-free system technology with AutoLock function facilitates connections that are automatically right-angled, obtuse-angled and acute-angled – and ensures built-in safety at the same time. Layher Allround Scaffolding has now become synonymous with modular scaffolding on the market.

Rapid assembly and optimum use of materials ensure economical scaffolding structures. The Aluminum FlexBeam makes it possible. It enables surface scaffolding to be efficiently assembled both suspended and upright 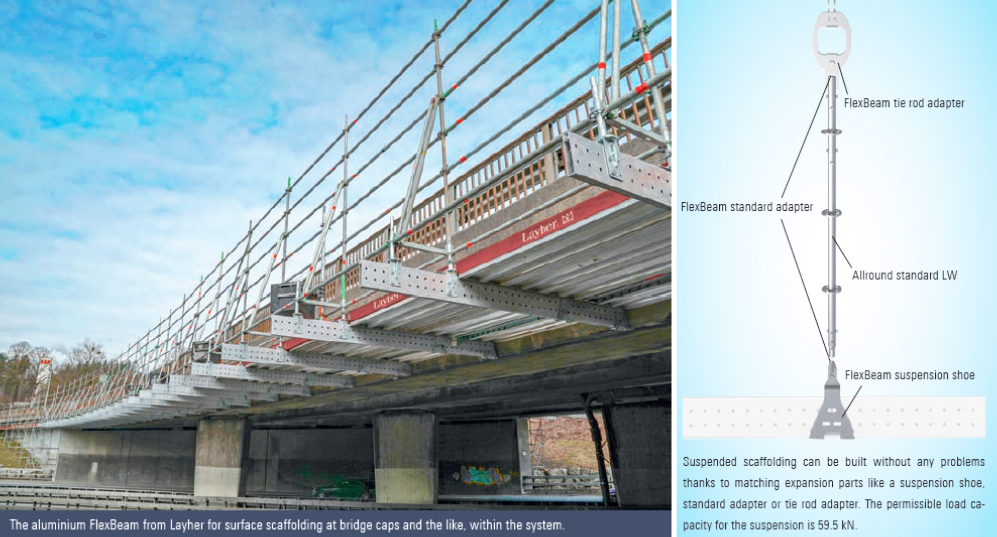 Further expansion using standard Allround components is also possible. In the case of use as suspended scaffolding. the anchor plate and the suspension shoe are available for receiving the beam. The anchor plate is intended for direct wall-plug connection to the structure.

The world’s largest system scaffolding manufacture has developed a revolutionary Aluminum FlexBeam to help create safe and economical quality structures. The Layher FlexBeam system adds a new dimension to the concept of Allround scaffolding for soffit access, gantry access and cantilever access. The Aluminum FlexBeam has many advantages over applications where previous lattice beams relied on time consuming assembly by traditional scaffolding methods.

In the past, constructing suspended and cantilevered access, elevated site cabin and pedestrian gantry walkway types of scaffold structures would involve an array of heavy steel lattice beams requiring time-consuming installation, and the use of further materials for lacing, bracing and tying the structure. This new innovation does all of this in a single product facilitating rapid assembly. The high load capacity Aluminum FlexBeam enables surface scaffolding to be efficiently assembled both suspended and upright.

This well-designed product comes with a number of options making it extremely flexible in a range of different situations. The suspension shoe can be directly connected to the tie rod adapter, meaning the suspension itself can be extended in length by Allround standards using the standard adapter, male or female adapter. A standard connector is used for expansion within the Layher system dimensions.

The FlexBeam is a 280 mm deep rectangular hollow section extruded Aluminium beam designed for suspension and support applications with components allowing compatibility with Layher Allround bay sizes. The components include a suspension system for bridge or floor slab soffit access. A selection of adaptors allow the connection of Layher Allround scaffolding either above and or below the FlexBeam, ensuring convenient methods of access wherever required.

The FlexBeam system is quick and easy to erect, employing pins with safety clips for ease of assembly and positioning. The system is designed to incorporate Layher’s steel or aluminium decking systems directly onto the beam creating an immediate working platform. This includes a Layher lock-against-lift-off (LALO) system that provides structural stability and prevents the decking from being dislodged in high-wind conditions.

FlexBeams are supplied in lengths of 3m to 7m. Where required, the beams can be joined end-to-end using the FlexBeam connector. The system components for support and suspension are located along the beam length, and allow much higher point-load applications when compared to conventional lattice beams. What’s more, the lift-off preventer can be inserted anywhere and moved in the longitudinal direction of the beam, fixed in place with a special bolt. To extend the length of beams, the FlexBeam spigot is available, which is inserted into the hollow chamber of the beam section and then pinned to it. The timber beam support permits lateral fitting of an extra beam. For example, it can act as a basis for providing fitted bays in curved sections.

The Cross – Connector – Two Functions In One Components

The cross – connector allow FlexiBeam, position one above the other and at right angles, to be turned into structure. Bracing structure for façade or birdcage scaffolding or even platforms can be easily using systems components, regardless of the bay lengths of the scaffolding or the distance between beams. Special structure produced specially for projects – e.g. welded steel structure – can simply be replaced by them, not only resulting in economic benefits but also saving raw material resources. 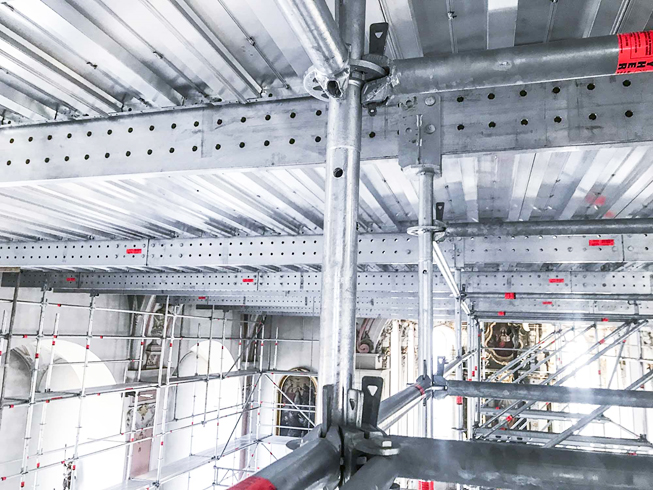 By using state-of-the-art design software, on-going installation help and direct liaison, they have worked and continue to forge strong links with some of the top contractors in the industry.

The Benefits for End User