For more than 75 years, Layher (The name of German company) has been synonymous worldwide with high-quality and practically tested scaffolding systems. Layher is present all over the world with more than 30 sales subsidiaries. The products are used for building and construction, in all kinds of industries like chemical plants or power plants, at shipyards and offshore. Due to innovative products, superior technical solutions and Layher’s absolute customer orientated service package, Layher has become the standard in scaffolding systems worldwide.

Rapid assembly of 100,000 cubic metres of birdcage scaffolding: constructing the scaffolding for modernization work on the Adolphe Bridge in Luxembourg presented the erectors with a number of challenges. But it was “light” work to meet all these requirements thanks to the combination of Allround Scaffolding and Allround Lightweight from Layher – the new dimension in scaffolding. The modular system is impressive for its substantially lighter components bit consistently high load-bearing capacity – and for its compatibility with the comprehensive Allround range of components.

Deteriorating bridges are a problem not only in Germany, but also in Luxembourg, where “bridge repair” is a hot topic. A current example: the Adolphe Bridge in Luxembourg City. Cracks, infiltrations and heavy traffic have put a heavy strain on this landmark, more than 100 years old. Up to 2,000 cars and 150 buses and coaches were driving over the structure every hour so far, and the bridge now needs a thorough repair. The main arches are being permanently reinforced, the road surface removed, restored and widened – at all times in conformity with UNESCO requirements for preserving the architecture as designed and implementation.

This was to be made possible using work scaffolding of load class 4, perfectly matched to the structural shape and above all quickly assembled to ensure the safety of the construction workers. Finally, the decision-makers wanted to have the Adolphe Bridge, known in the local language as the “Nei Bréck”, restored to its former splendour. But there were also a few engineering challenges to be tackled during assembly. For example, the bridge, a popular postcard motif, was not to be subjected to loads, which ruled out the option of using suspended scaffolding. To make all the surfaces of the 153 metre long arched stone bridge accessible, a Luxembourgish scaffolding construction company therefore built a combination, some approx.100,000 cubic metres in size, of birdcage scaffolding and – in the area of the intermediate arches – a suspended scaffolding mounted on the birdcage scaffolding. 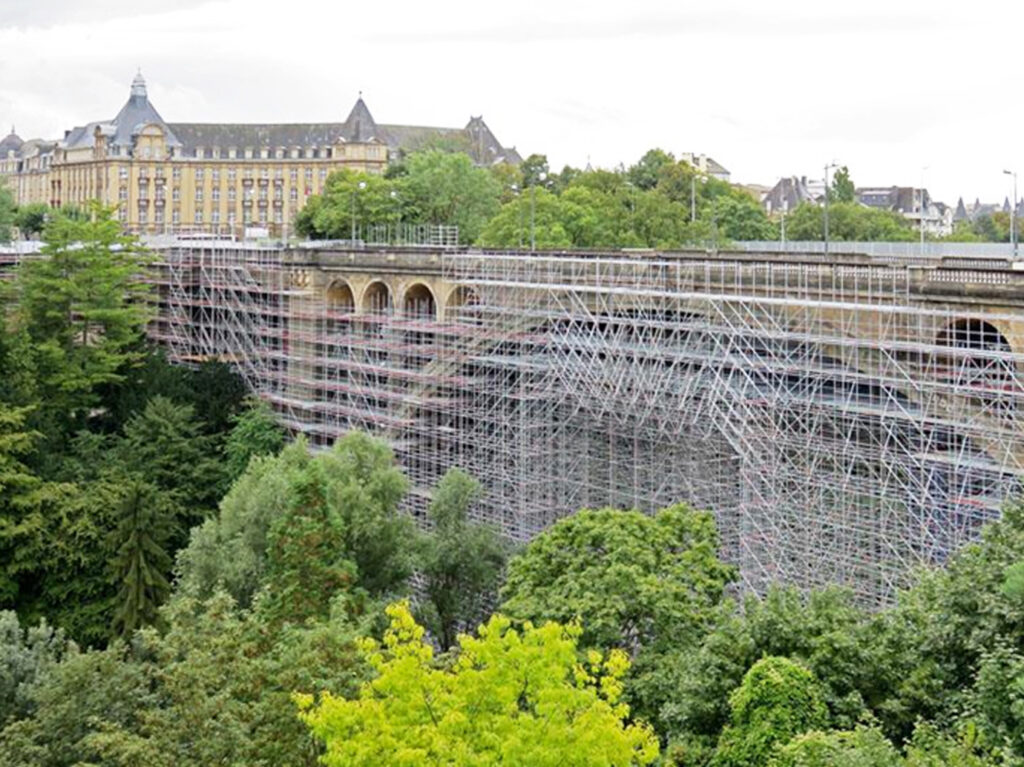 “More possibilities” for the scaffolding company were created by the new Allround Lightweight equipment from Layher, which the erectors used together with the Allround System for the first time. The new system scaffolding of higher-strength steel wins out with components that are considerably lighter yet have a consistently high load-bearing capacity plus an innovative AutoLock function for the wedge-head connection. Since 80 per cent of scaffolding construction services are still determined by the costs for assembly, dismantling and transport, Layher is once again setting new standards: with assembly up to 10 per cent faster and at the same time safer, and with a 12 per cent higher transport capacity – plus reduced physical strain on the erectors. This both simplified and speeded up assembly of the 200 metre long, 45 metre high and 24 metre wide structure, as well as the logistics aspects, as the valley is only accessible via narrow paths.

Further, scaffolding construction requires: two passageways for pedestrians and for site vehicles, one site access and no bridging of the river. A big advantage here was compatibility with the Allround system. Thanks to a valid combination approval, its extensive range of components could be installed without any problem together with Allround Lightweight, offering scaffolding erectors a wide range of possible applications – even in the case of difficult geometries or very irregular architecture. For the bridging structures, the scaffolding erectors selected Allround lattice beams and strengthening using a diagonal brace to transmit the loads in lateral supports made of grouped standards. An Allround platform stairway tower provided safer access to the site.

Just As Safe: Working On The Scaffolding

Layher steel decks with their perforated surface profiles mean a non-slip and non-trip surface even in the winter months, while point anchoring and scaffolding braces ensure the necessary stability. As a finish, an appropriately designed tarpaulin was fitted to protect pedestrians from noise, dust and falling stone while ensuring an attractive appearance when seen from the city. An easy solution. The workers and pedestrians alike were just as keen on it as the clients and the Luxembourgish scaffolding company themselves – after all, construction of the scaffolding using Allround Lightweight was completed faster than planned. And the modernization of this arched bridge, which was named after Grand Duke Adolphe, is now also proceeding at top speed.