The Norwegian Parliament, in June of 1992, decided to come up with a tunnel which will go down the history of modern era as the world’s longest road tunnel with an expanse of 24.5 kilometers (15.2 miles). This famous tunnel stretches between Aurland and Laerdal on the new main highway connecting Oslo and Bergen, the largest cities in Norway, without ferry connections and difficult mountainous crossings during the winter.

Known as the Lærdal Tunnel (or Lærdalstunnelen in Norwegian), the construction time lasted five years and was completed in 2000, surpassing the world’s second longest tunnel, the St. Gottard Tunnel in Switzerland, by five miles. The idea to come up with a tunnel instead of repairing the already existing roads was to avoid harsh terrains where rock falls were common and the roads risky. From environmental point of view, it was well founded to invest in the new tunnel so as to preserve the untouched natural beauty. 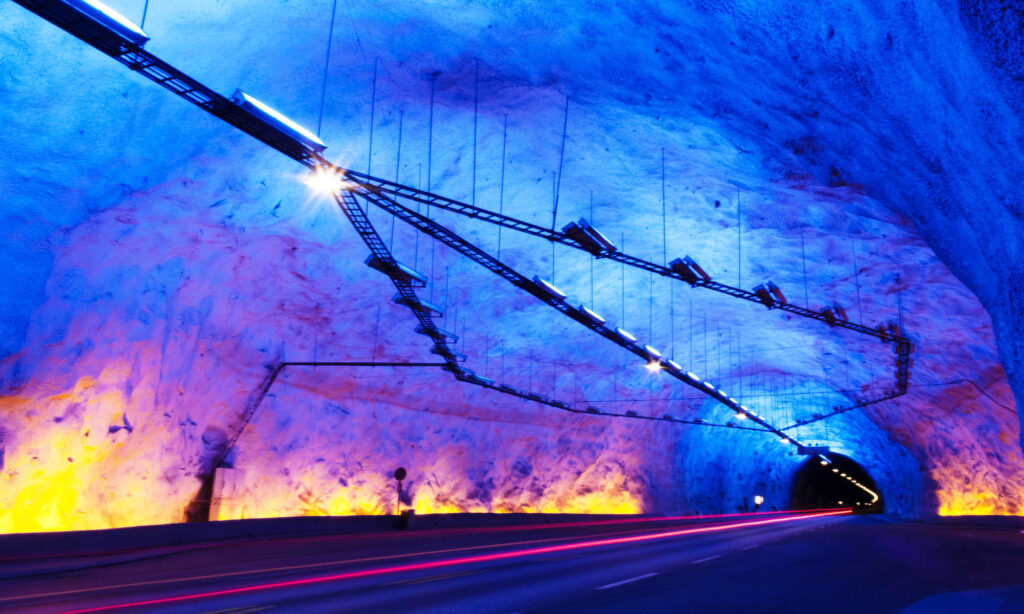 It was a daunting challenge for Norwegian Public Roads Administration (NPRA) to design a tunnel in such a fashion so that people did not find the 20-minute-long drive monotonous, thereby losing concentration during the long journey. The working group were led by psychologists at SINTEF (the Industrial and Technological Research Association) and to find fitting lightings, advantageous designs and gradual curves with shorter straight sections, simulators were brought into play

Strict adherence to guidelines for safe viewing distance was implemented so as to not breach them in any fashion. At any given point in the tunnel, the safe viewing distance is 1,000 m or more. At every 125 m, fire extinguishers are provided and 15 turning areas are incorporated for semi-trailers and buses. At every 500 m, emergency bays are available.

The tunnel has been designed while keeping in mind the mental strain of the drivers and to prevent them from falling asleep. Hence, the tunnel is divided into four segments which are separated by three large mountain caves at 6 km (3.7 mi) intervals. The caves have blue lights and yellow lights on the borders which look like sunrise; the main tunnel has white lights. The caves have been incorporated in the design to break the monotony of driving such a long stretch. It provides the drivers with short rests and rejuvenating scenery.

The dominant type of rock in the Laerdal tunnel is Precambrian Gneiss. The rock is mostly solid, but there were a few zones where it was broken and cracked. A few were so distinct at tunnel level that major safety initiatives were necessary while drilling the tunnel. While passing through a weak zone 10 km from Aurland, there was a huge fall from the roof of the tunnel. A total of around 1,000 cubic metres of rock fell. In order to continue, the entire site of the fall was filled with concrete and a new tunnel was then drilled through the fallen rock and concrete.

The Laerdal tunnel runs deep inside the mountain, with up to 1400 m of rock above the tunnel. The large masses of rock above the tunnel exert immense pressure. This, combined with the stresses from the horizontal tension in the earth’s crust, can lead to large chunks of rock falling from the tunnel’s ceiling and walls. This phenomenon is known as “rock burst”. The size of rock burst debris varies from small, thin flakes to huge blocks of stone. The builders of the Laerdal tunnel faced this problem frequently.

Works on the construction of the tunnel began from three positions at the same time and was divided into four stages:
* Drilling
* Blasting
* Loading and Transport
* Excavating and Landscaping

Computer controlled drilling of the tunnel with drilling jumbos, traditional drilling and blasting was carried out with great precision to make sure that the tunnel sections met more than 10 km into the rock and 1000 m under the mountain and maintain geometric precision. To determine fixed survey points on which other measurements inside the tunnel were based, navigation satellites were utilised.  Inside the tunnel, bearings were indicated using laser beams. A computer on the drilling jumbo captured the laser beams and positioned the drilling equipment automatically, according to a set pattern. Each drilling jumbo contained three automatic hydraulic drills.

Computer controlled drilling of the tunnel with drilling jumbos, traditional drilling and blasting was carried out with great precision to make sure that the tunnel sections met more than 10 km into the rock and 1000 m under the mountain and maintain geometric precision. To determine fixed survey points on which other measurements inside the tunnel were based, navigation satellites were utilised.  Inside the tunnel, bearings were indicated using laser beams. A computer on the drilling jumbo captured the laser beams and positioned the drilling equipment automatically, according to a set pattern. Each drilling jumbo contained three automatic hydraulic drills.

To transport the excavated materials out of the tunnel, wheel mounted loaders were utilized. Also, a permanent road was built in parallel to the ongoing tunnelling work, increasing efficiency and reducing pollution of the transport vehicles.

Aside from its remarkable length, the Lærdal Tunnel is also the first to come up with its own air treatment plant. Better air quality in the tunnel is achieved in two ways: ventilation and purification. Located in a 328-foot (100 m) chamber about 9.5 km (5.9 mi) northwest of Aurlandsvangen, the tunnel is longitudinally ventilated. There is only one ventilation air exhaust shaft, 18 km from the Aurland end of the tunnel. About 10 km from the Aurland end of the tunnel, a cleaning plant for the tunnel ventilation air is installed in a short side tunnel which cleans the flowing air for polluting components. Constant cleaning from this plant maintains an acceptable air quality throughout the tunnel even during heavy traffic. The cleaning plant comprises of an electrostatic precipitator which removes particulate impurities, followed by a gas cleaning plant that removes heavy polluting gaseous components from the air.

The upstream electrostatic precipitator is proven technology especially developed for tunnel air cleaning purposes by the Norwegian company CTA, and is highly efficient. It will remove 90-95% of the respiratory particles (PM10) in the air. The downstream gas cleaning system, delivered by ABB Miljø AS, removes 85-90% of the nitrogen dioxide (NO2 ) gas and absorbs 60% of the VOC gases (Volatile Organic Compounds — un-combusted remains from gasoline and diesel gases) including 75% or better removal of components like Benzene, and similar aromatic and polyaromatic hydrocarbons (PAHs). Ozone (O3) is removed to 100%.

The tunnel shaft exhausts the residual air in a non-populated area. For city tunnels, where pollution problems are primarily related for the city air quality in general, this air cleaning technology can advantageously be used to clean the polluted ventilation air from the tunnel before discharge into the urban environment. 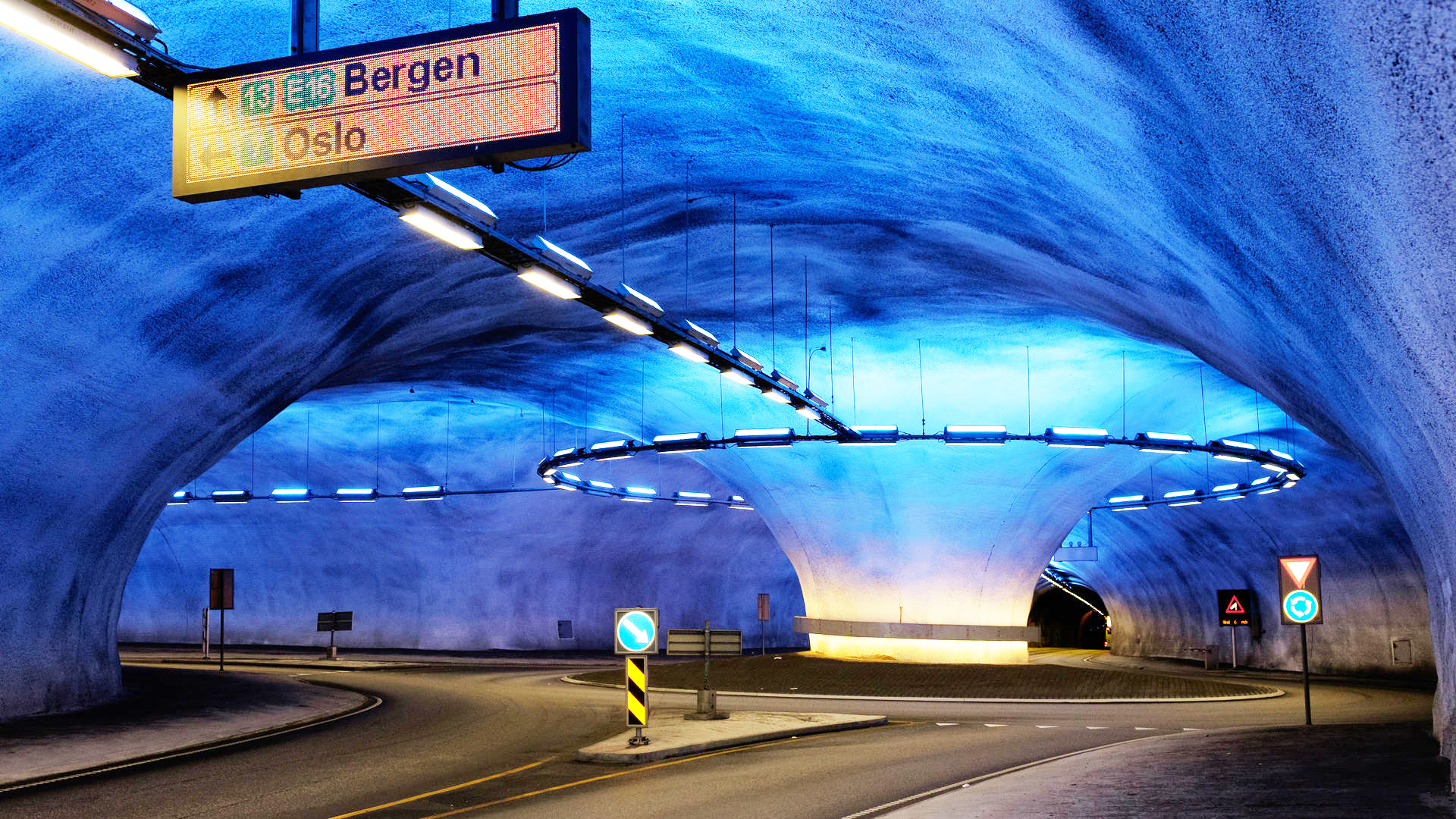