The mighty Paraná River located on the border between Brazil and Paraguay is harnessed by one of the largest operational hydroelectric energy producer in the world, the Itaipu Dam. The name“Itaipu” was taken from an isle that existed near the construction site. In the Guarani language, Itaipu means ‘the sounding stone’. The plant is operated by Itaipu Binacional and has an installed generation capacity of 14GW, with 20 generating units providing 700MW each with a hydraulic design head of 118m (387ft). The structure which serves to generate power is about 7.9km long, with a maximum height of 196m is known as one of the seven wonders of the modern world due to its sheer immensity, which costs US$19.6 billion (equivalent to $48.8 billion today). 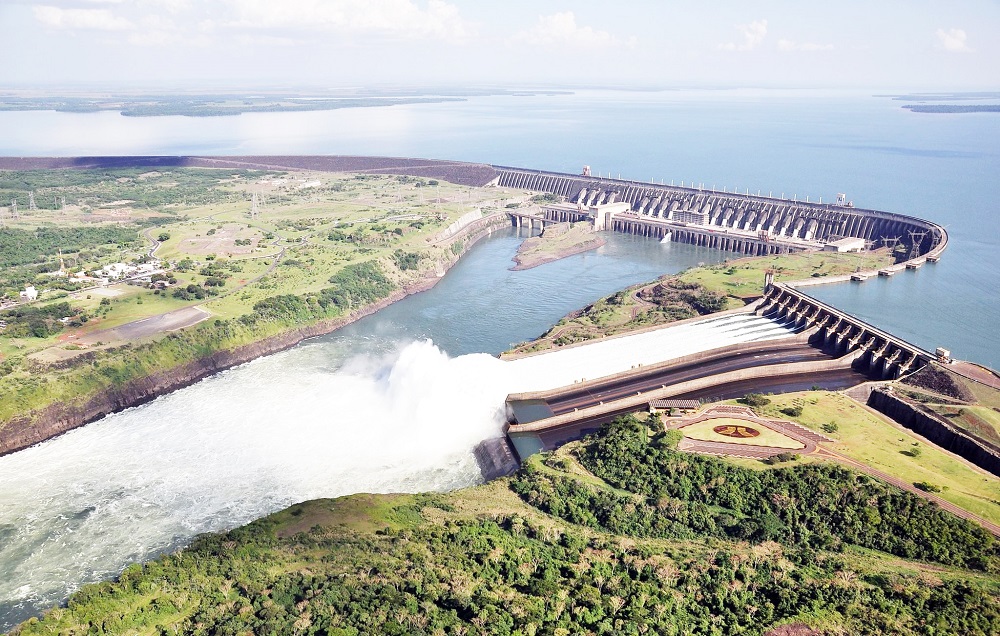 The construction of the power plant is the result of intense negotiations between Brazil and Paraguay, which started back in the 60s. On April 26th, 1973, the countries signed the Itaipu Treaty, the legal instrument authorizing them to use the Paraná River for hydroelectric purposes. In May, 1974, the company Itaipu Binacional was created to build and manage the power plant. Completed in 1984, it is a bi-national undertaking run by Brazil and Paraguay; each country owns half of the 14,000MW output which the dam produces. The project ranges from Foz do Iguaçu, in Brazil and Ciudad del Este in Paraguay, in the south to Guaíra and Salto del Guairá in the north.

A total of 20 generator units installed, out of which 10 units generate at 50Hz for Paraguay and 10 units generate at 60Hz for Brazil. Since the output capacity of the Paraguayan generators far exceeds the energy requirement in Paraguay, most of their production is exported directly to the Brazilian side, from where 2 600 kV HVDC lines, each approximately 800km (500mi) long, carry the majority of the energy to the São Paulo/Rio de Janeiro region where the terminal equipment converts the power to 60Hz.

A consortium of US-based IECO and Italy-based ELC Electroconsult carried out the viability studies of the project and its construction. In the planning stages of the Itaipú dam, the project team recognized that sediment blockage and unreliable flows during periods of dry weather which would pose significant challenges to the dam’s efficient functioning and performance. Sediment could potentially be removed from the reservoirs through dredging, yet this activity is expensive, environmentally harmful and would have to be completed at a large scale and at regular intervals. 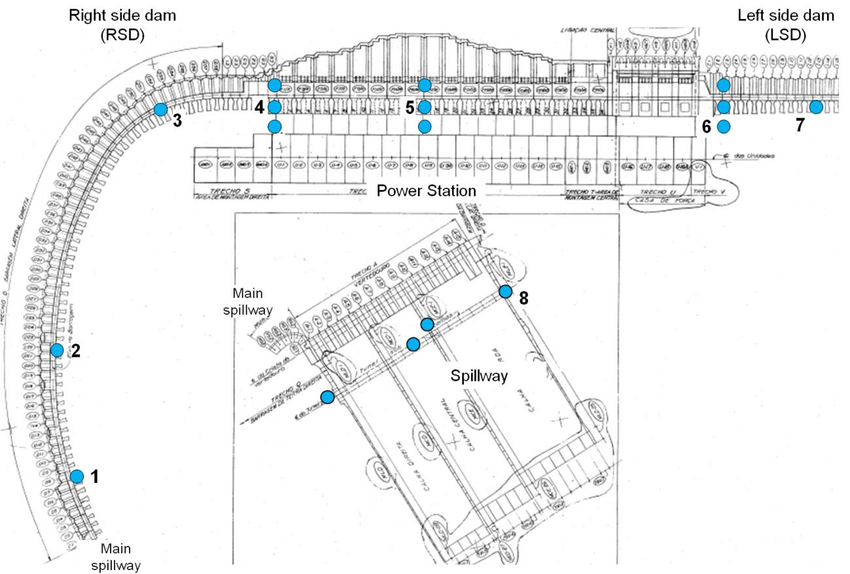 The situation being completely unsustainable, Itaipú Binacional followed an outcomes-led approach which recognised that the forests and soils could provide benefits. Restoring forests, in particular in a belt along the river, and changing approaches to conventional land management practices that impact water quality, these nature-based solutions could provide water regulation and sediment control. 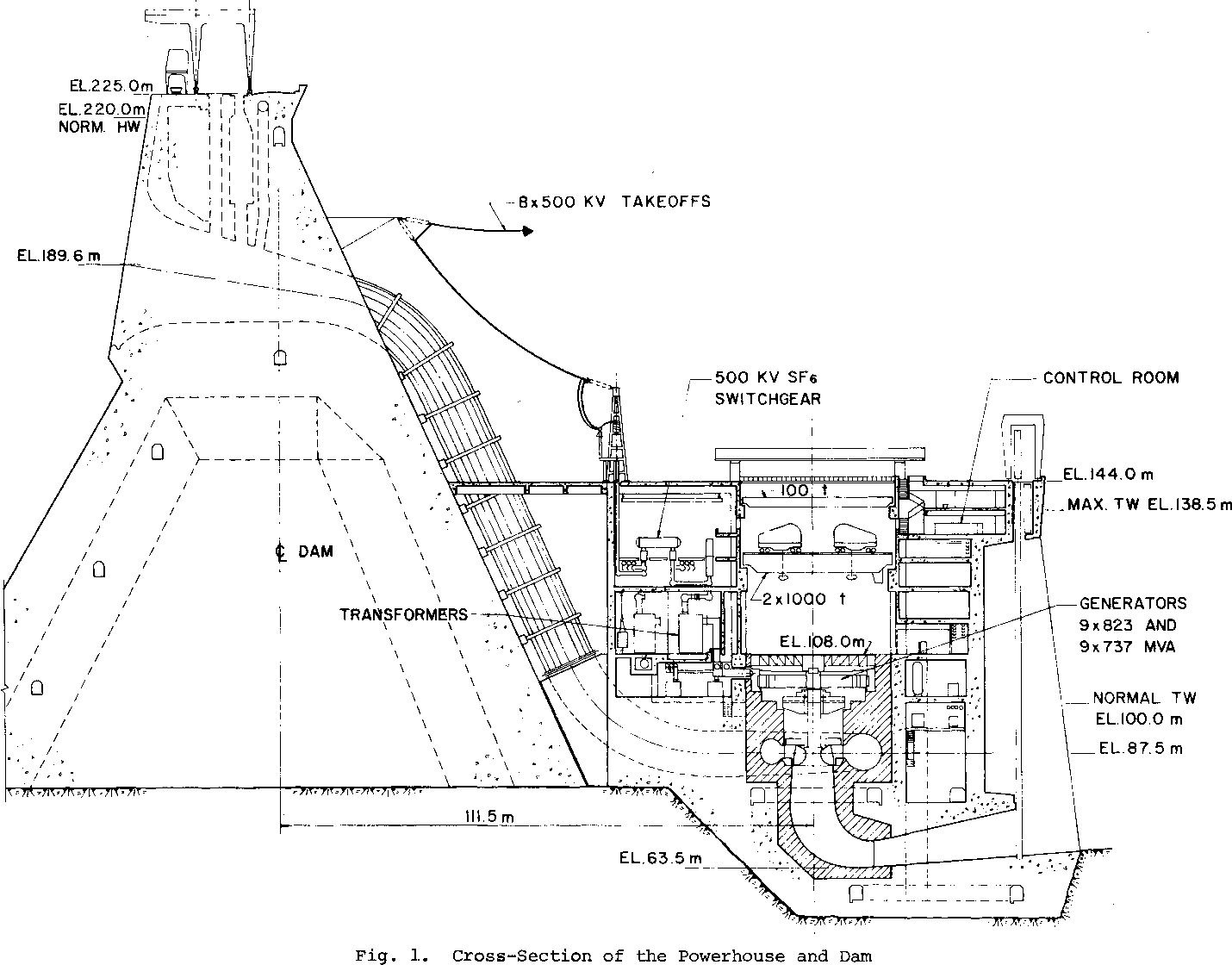 Forests offer a number of important water-related services like reducing the rate of sedimentation, and can store substantial amounts of water, protecting local catchments through gradual release and helping to regulate water flow. Owing to their expansive root systems, trees can help to stabilize soil, help control soil erosion and act as water filter and purifier. Once in place, nature-based solutions will continue to provide their services until they are removed an often require little to no maintenance. The sustainable solution can be quickly increase in scale as for the Itaipú dam, the services that are provided by nature are simply not feasible to replicate by other engineered solutions while providing a variety of additional benefits, including helping the dam become more resilient to changing climatic conditions and the influence that has on the rate of water flow.

The construction of one of the biggest dams began in the January of 1975 with an army of 40,000 workers who took 7 years to complete the gigantic hydroelectric energy producer. During its construction, workers shifted the course of the seventh largest river in the world by removing 50 million tons of earth and rock to dig a 1.3-mile bypass. It was biggest diversion canal ever attempted. Mechanical diggers were used to dig the diversion canal which took almost three years for workers to carve a 1.3-mile-long, 300-foot-deep, 490-foot-wide diversion channel for the river. The newly dug channel was used on 20th Oct, 1978 by blasting the concrete blocks. Only half of the river was diverted so cofferdams were built in the way of previous flow.

Itaipu’s main dam, as high as a 65-story building, is composed of hollow concrete segments while the auxiliary dams are made from rockfill and earthfill rocks and earth from local excavations. The iron and steel used at Itaipu was enough to build 300 Eiffel Towers. The Dam was designed in such a manner that it was not to be supported by natural or physical features, instead it was to be made so heavy that water would simply not move it. Thus it had to weigh 61 million tons and Itaipu dam was named Gravity dam. The base of dams was wider and stood on sound solid foundations. The walls were made hollow and machinery and powerhouses were also installed therein to make the structure economical. During construction, in June 1979, weak layer of crumbling rock was discovered in the bedrock. The crushing rock was drilled out and replaced with a massive filling of 10 million pounds concrete of extra strength. Water pressure at the wall was estimated to be equal to 4000 bulldozers pushing against them Huge steel structures were erected to be filled in by concrete. As block of concrete was on mammoth size, heat of hydration was also to be equivalent, so aggregate was washed with ice and 4º C concrete was produced and temperature only reached 7º C during pouring.

The reservoir was the filled up with water by re-diverting the river. It took 14 days for the river Parana’s water to completely fill the reservoir up to a depth of 100m. To stop the overflow of dam, spillways were built and designed to cope with 64 million liters/second of water. When first tested it was the biggest man made water fall ever. It was 22 times larger than the Niagara Falls. To dissipate the energy of high thrust water, a slope (jump) was provided at the end. The water from the spillway had a high thrust and if it were left to go directly down the stream it would have caused the production of high-energy waves, hence flooding. So, the water was thrown into the air. Hydraulic Engineers found out the angle of jump by scaled models.

Another marvel of Itaipu is its powerhouse – half a mile long, half underwater and containing 18 hydroelectric generators each 53ft. across. Some 160 tons of water per second pour onto each turbine, generating 12,600M. Itaipu currently supplies 28% of all the electric energy in Brazil’s south, southeast and central-west regions, and 72% of Paraguay’s total energy consumption.