Hyderabad Metro Rail is a Public-Private-Partnership Project, that is being implemented through a special purpose vehicle (SPV) – “L&T Metro Rail (Hyderabad) Limited” – part of L&T Group Company. It is being executed on a design, build, finance, operate and transfer (DBFOT) basis with an investment in excess of Rs.16,000cr, generating a 10,000 plus -direct employment during construction period, and 3,000 post commissioning. Indirect employment to vendors and others are around 5,000 during construction period and around 100000 after commissioning including the18.5 million sft of Transit Oriented Development. The concession period for the project is initially for 35years, which is extendable further by 25 years.

This project also has an opportunity of 18.5 million square feet of Transit- Oriented Development (TOD) in the earmarked (P&C) areas and depots.

Specialty of the Project

Some “Firsts” in this Project are highlighted below: 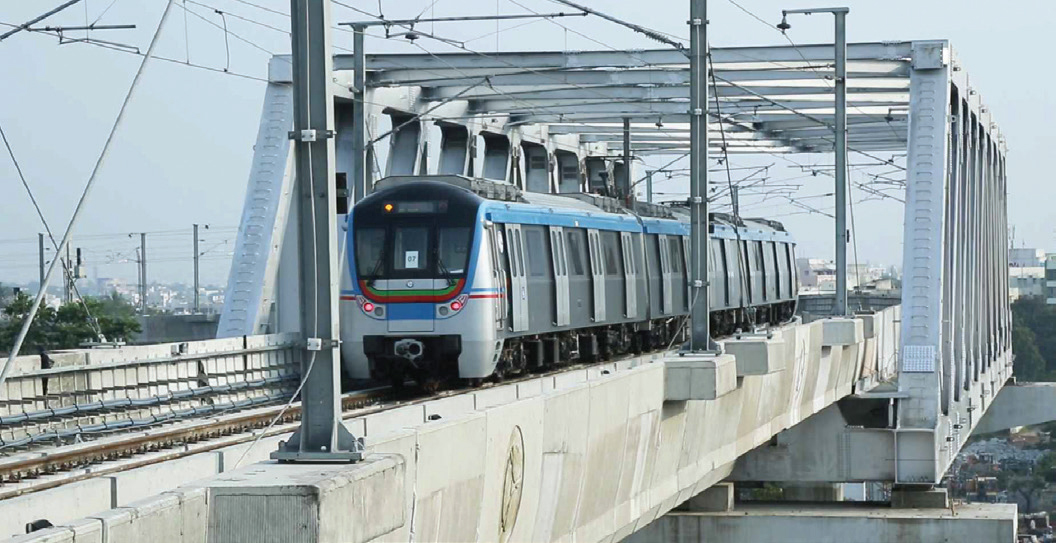 These are the elements, which take the axial loads of the viaducts and all the equipment above it. Generally, neoprene bearings in combination with seismic arrestors are used to take care of all the vibrations. For special/obligatory span POT/PTFE and spherical knuckle bearings are used. Special stability checks carried out on superstructures for sharp curves (Min Radii of Curvature 128 m).

Viaducts are horizontal platforms over which the train runs. These viaducts are basically segmental precast post-tensioned box girders joined to span between two piers with the help of launching girders. Special/obligatory spans are either cast-in-situ or precast (3-span continuous or simply supported). The viaducts are accompanied by RCC parapets on top to support the signalling equipment and overhead masts. Noise barriers are provided on parapets in sensitive areas. The entire structure has a Design basis report (DBR), which was prepared with the knowledge of all stakeholders and has been RDSO/MoR approved.

There are 8 ROBs where Metro viaducts will be crossing the Indian Railways lines. The ROB structures are being designed by M/s Ramboll as Detailed Design Consultants (DDC), checked and approved by M/s Aecom – Feedback Infra on behalf of LTMRHL, approved by independent engineer (I.E) M/s Louis Berger Company on behalf of HMRL and finally proof checked by RITES on behalf of South Central Railways. 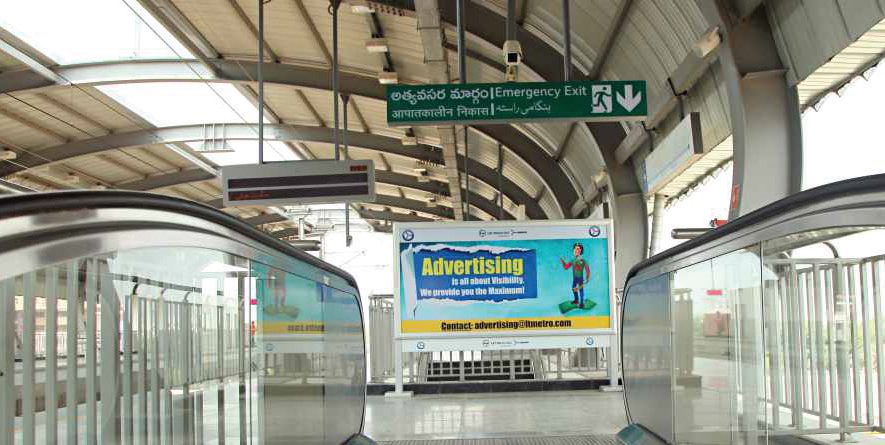 Amongst all the 8 Metro RoBs, Oliphenta Bridge construction is the toughest and an engineering feat. 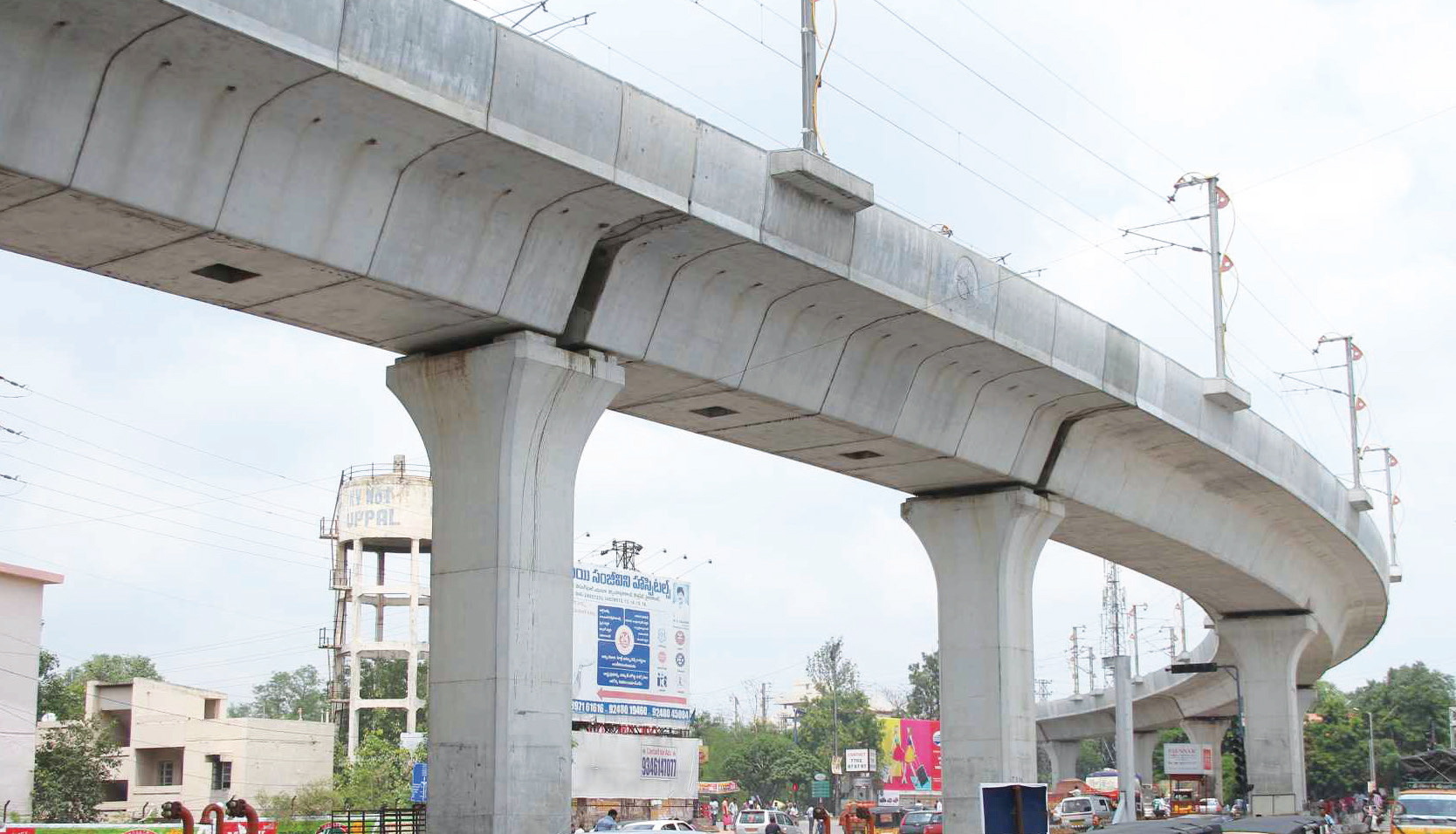 Balanced cantilever structural system adopted for metro stations, is a unique one. It provides several advantages to the city during construction as well as after construction. Each station is having three levels, The Street Level, the Concourse Level and the Platform Level.

Concourse level is made up of pre-cast segmental post tensioned spine girder with end segments supported on bearings placed over pier cap. Precast post tensioned wings are attached on either side of the spine girder ensuring the service requirements.

The station pier in the road median is designed to support the track structure, platform structure and concourse level structure. The station piers are located at the central median of road and the station is cantilevered on the single pier, thereby avoiding any structural support from the shoulders of the road. The station box is proportioned to suit even for narrow streets of the city. Pier centres (spans) are maintained in such a way to achieve necessary road clearance (5.5m) and to meet the rail level requirements while carrying the station and viaduct loads. Each span between any two piers are independent and kept separate by providing expansion joints.

Entry-exit structures are located on either end of the road to facilitate easy approach for the passengers. Stations are designed considering the evacuation criteria prescribed as per NFPA 130 standard and barrier free design. All relevant standards such as BIS, IRS-CBC and BS codes have been adopted.

Stage I &II of L&T Metro Rail (Hyderabad) Limited has been awarded with the prestigious IGBC Platinum Rating for its 17 elevated stations, the highest accomplishment for any project. LTMRHL’s technical innovations of adoption of the spine & wing concept, the hump at the station platform level, regenerative braking in rolling stocks and greening of median areas below viaduct has led to the spread and growth of green metro rail movement in the country. LTMRHL will be the trendsetter for the upcoming metro rail projects all over India to incorporate some of the initiatives. 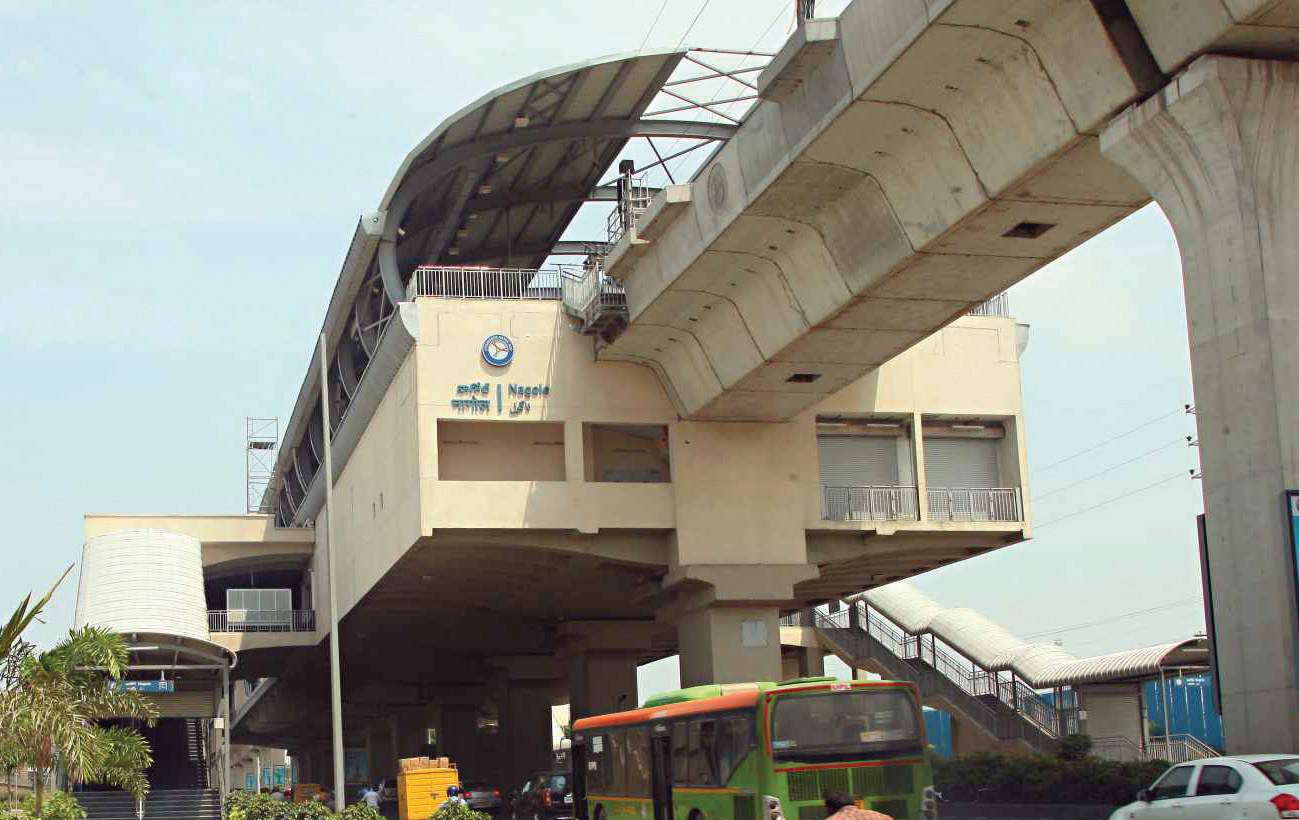 Apart from using Launching Girders/Gantries, ‘Chariot Crane’ has been used. Chariot Crane is a 75MT crane on steel wheels. Above the plinth beam that is meant for installing rails for train to move, temporary rails have been installed and chariot crane deployed. This crane was used for erection of pre-cast pre-tensioned beams for `station platform.

The balanced cantilever structural system typically adopted for metro stations is a unique one. It provides several advantages to the city during as well as after construction. The station piers are located at the central median and the station is cantilevered on the single column, thereby avoiding any structural support at the side medians. Following advantages are achieved by this system:

Ticket vending machines are provided to aid the passengers with speech impairments. Wide automatic fare gates are provided for passengers on wheelchair. Direction to all commuter facilities like ticketing, washroom, lifts, staircase, train door, customer service, etc. has been provided through tactile flooring for visually impaired passengers. There are designated wheelchair spaces in the first and last car of the trains. Five per cent of seats are designated for the physically challenged passengers. Fixed and dynamic lit signages within the trains are provided to guide hearing impaired passengers. Announcements are made in the train to aid those who might be unable to see or read the information being shown on the signage.

Energy efficient features are incorporated in station design. The stations are generally located on hump which means reduced power requirement to decelerate or accelerate for an approaching or departing train respectively. The stations are open buildings with minimum external walls in public areas, reducing lighting requirements during day time and providing ample ventilation. LED lighting systems with reduced power requirements and solar panels to capture alternative power, etc are installed in the station.

The entire mainline of The Metro Project has ballast-less track, whereas tracks in depots are ballasted and special tracks. The primary reason of adopting ballast-less track technology is lower maintenance requirement, which suits our time constraints (non-revenue hours available for maintenance work). The permanent way consists of rails of profile 60 E 1 Head Hardened Gr.1080 for complete main line and rails of profile 60 E 1 Normal Rails Gr.880 for depots which shall be 18 m long. The rails manufacturing and testing will be done as per IRS – T- 12, 2009. Restraining rails of profile 33 C1, grade 880 of 13 m length shall be provided for all curves of radius less than 190 m. 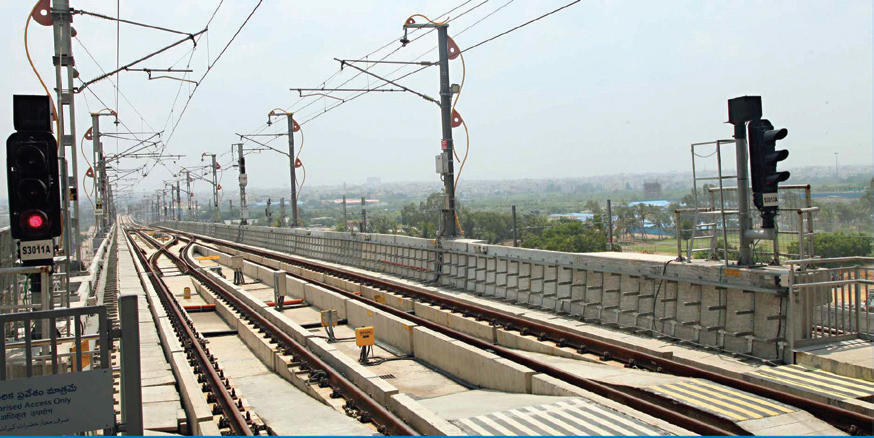 Fastening system 336 is being adopted for ballast-less track in this project. The fasteners are spaced at 650mm c/c on viaduct and ramp with 1 in 40 rail inclination. The track in the depots has been laid on ballasted track and special track with Standard Gauge Mono block PSC Sleepers with the spacing at 600mm c/c sleeper using ERC MK III fastening system and GFN Liners of indigenous make and 65mm stone ballast with minimum cushion of 250mm under the sleepers. The cushion is 300mm for test track. Portion of depot track has also been laid as embedded track with special base plates and on plinth with ballast-less fastenings to suit the requirement. All the turnouts to be negotiated are with 1 in 40 rail inclination. 1 in 9 switches of radius 300 and 190 for the main line and 1 in 7 switches of radius 190 in the depot with Zu 60 profile (thick web) are used. All the running rails are continuously welded by Flash Butt Welding/Alumino Thermic Welding processes. The track on Main Line has been laid on plinth type ballast less track with rails discretely supported by ballast less fastenings on Concrete plinths of M35 grade.