Measuring 55 km-long, including connecting roads, Hong Kong-Zhuhai-Macau Bridge (HZMB) is the world’s longest sea bridge and the longest fixed link on earth. It connects the west side of Hong Kong to Macau and the city of Zhuhai in Guangdong province, China. HZMB is a project of national and international significance; the desire was to ensure that it was constructed to the highest standards. The three Governments and the Authority completed the project with a target to achieve a 120-year design life for the crossing, with normal levels of regular maintenance.

The 55 km crossing consists of three cable-stayed bridges, boundary crossing facilities and link roads in the three cities, reducing the travelling time between Hong Kong and Macau/Zhuhai from an hour’s ferry ride to a 40-minute car journey. The functions of the bridge is to meet the demand of passenger and freight land transport among Hong Kong, the Mainland (particularly the region of Pearl River West) and Macau, to establish a new land transport link between the east and west banks of the Pearl River, and to enhance the economic and sustainable development of the three places. 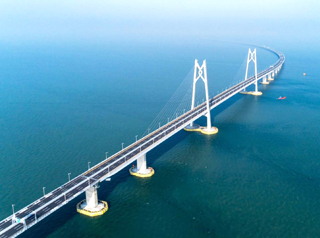 Preliminary design of the main bridge began in March 2009. The construction started in December 2009 and was completed in February 2018. The 29.6 km-long Hong Kong-Zhuhai-Macau Bridge (HKZMB) was inaugurated in October 2018. The total cost of the project was RMB 120 bn ($17.3 bn), while $87 m in funding was sanctioned for preliminary design and site investigation and $47 m for the preconstruction works initially. Hong Kong Legislative Council approved an additional HK$8.8 bn ($1.1 bn) for the project in April 2012.

Several types of plants were used to provide greenery and colour in different patterns covering over 30% of the Hong Kong Port. In addition to emphasising the green landscape, the project contributed to sustainable development via creative engineering design, including independent sewage treatment system, district cooling system, eco-friendly building design, non-dredge reclamation method, among others.

The structure consists of three cable-stayed bridges, three artificial islands and one undersea tunnel spanning 55 km through the Lingdingyang channel. The route connects the three major cities of Hong Kong, Zhuhai and Macau on the Pearl River Delta – one of the world’s busiest shipping channels.

Formed from pre-stressed concrete box sections, the bridge was constructed using the balanced cantilever method. The total length of the crossing is approximately 41.6 km, of which 12 km is in Hong Kong territory and 29.6 km is in Guangdong. Forming a bridge-cum-tunnel structure, the bridge comprises a double three-track carriageway. It lands on two artificial islands created on the east and west of the Hong Kong special administrative region.

A scheme using a bridge and tunnel combination was adopted for the main part of the crossing within mainland territory. It comprises land and marine viaducts about 9.4 km in length, a 1 km tunnel and a 1.6 km road section.

The Promat team worked on the HZMB project for a number of years. The designers chose the RABT curve up to maximum 1200°C and determined the need for 25 mm thick PROMATECT®-H to be fixed directly to concrete according to the design and regulatory specifications. Approximately 290,000 m² of PROMATECT®-H and 8,000 tubes of 600 ml PROMASEAL®-A Acrylic Sealant are employed in the HZMB tunnel, making it one of the largest fire resistant board construction jobs for the tunnel segment business of Promat worldwide.

With a wavy roof designed to simulate undulating waves, the passenger clearance building (PCB) is an iconic building standing at the Hong Kong Port next to the airport.

To tackle the challenge of airport height restrictions, an innovative construction method was adopted to construct the PCB’s roof by using the prefabricated modules assembly method. The large-scale prefabricated modules were lifted one by one, pushed into position horizontally and connected together.  Problems posed by the huge size, as well as the airport height restrictions, were overcome.

The method advanced the construction progress, enhanced the quality of works and reduced the risk of working at height. Different from the ordinary prefabricated modules, the roof modules were composed not only of structural steel frame, but also the pre-installed building services, as well as architectural builder works and finishes, saving on-site construction time.

Non-dredge reclamation was the first-ever reclamation method adopted in Hong Kong. It greatly cut the amount of dredging and dumping of marine mud by about 22 million m3 and reduced the use of approximately half of the backfilling material.

This led to a lower impact on water quality and less marine construction traffic during the building stage. This helped to preserve marine ecology, especially the habitat of the Chinese white dolphins.

The HKLR viaduct section features long spans as the carriageway crosses two navigation channels and Sha Lo Wan Headland, a designated Site of Archaeological Interest, where no construction works were allowed. A massive, bespoke straddle carrier was used to construct the long-span viaduct of 180 m in length. At the time it was erected, it was the longest, dual three-lane pre-stressed precast concrete bridge span in Hong Kong. The design minimised the visual and environmental impact and has also become a feature of the area, complementing the natural scenery of North Lantau.

Floating concrete batching plant was introduced, which was the first of such facilities in Hong Kong and significantly reduced the logistics and ensured the best quality of concrete produced.

The construction of two separate tunnel tubes of the HKLR to cross under the existing Airport Express Line (AEL) is one of the most challenging works for the HZMB project in Hong Kong.

As the AEL is an important railway link between Hong Kong International Airport and the central business district, the normal and safe operation of the AEL must be maintained at all times.

To ensure undisrupted operation of AEL during the tunnelling works, box jacking was adopted – the first time it was used at such scale in Hong Kong. It involved pushing the constructed tunnel box segments forward by hydraulic jacks sequentially in a ‘caterpillar’ motion, with a design jacking force of 19,400 tonnes – enough to lift 70 empty Airbus A380s in one go.

Besides the large scale of the project, there were a range of physical conditions to be overcome during the construction of HZMB, including the sub-tropical weather, typhoons, heavy rain, and the hydrology and hydrodynamic aspects of the Pearl River estuary. Other factors included the geotechnical complexity of the site, the multiple navigation channels with high numbers of shipping movements and height restrictions for nearby airports. The HZMB also crosses environmentally sensitive areas — particularly the conservation area of the Chinese White Dolphin — which meant that high standards of environmental protection were set to minimise any effects on the marine ecosystem and fishery resources.