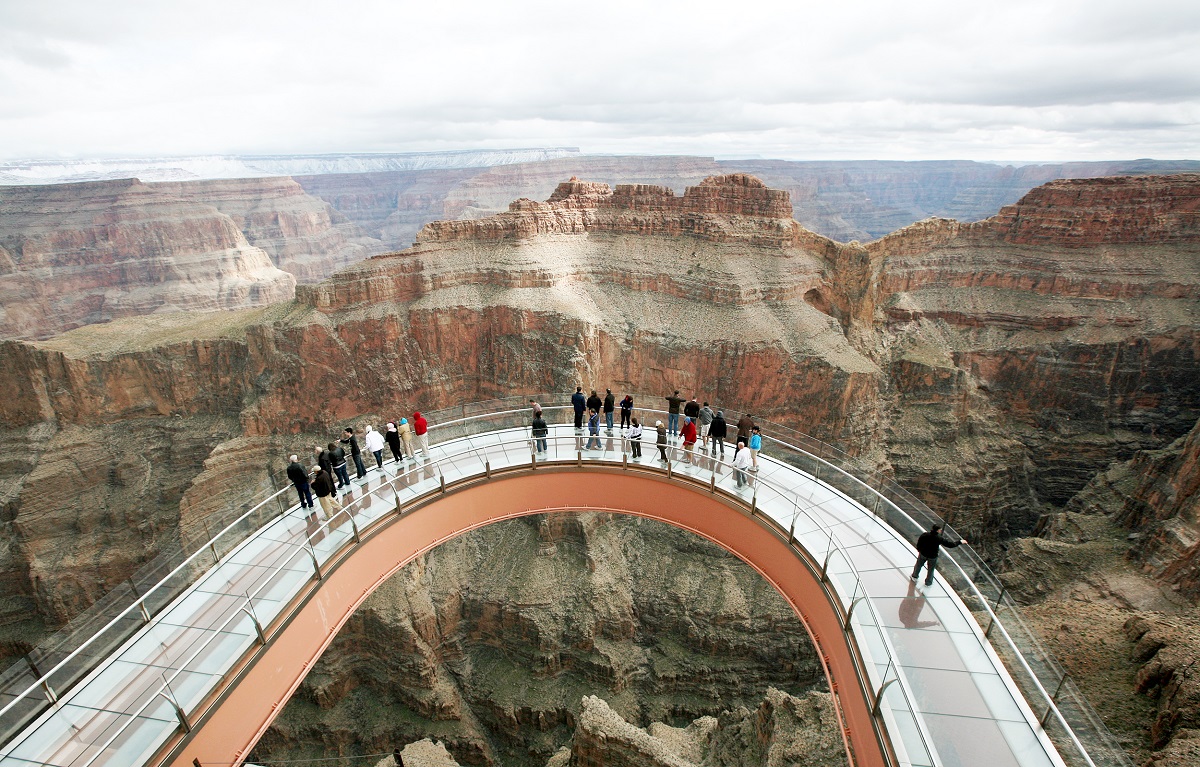 A skywalk extends out over the Grand Canyon in this view from the incomplete building that houses the skywalk, on the Hualapai Indian Reservation, Arizona February 28, 2012. The tiny Hualapai nation, in a bold move that could serve as a test of the limits of the sovereign power of Native American tribes over non-members, exercised its right of eminent domain last month to take over the management of the site and kick out the non-Indian developer. The dispute over the potentially lucrative Skywalk — which all agree could draw up to 3,000 visitors a day — pits the tribe’s sovereign rights over a site it sees as its economic lifeblood against a developer’s contractual right to manage the attraction for 25 years and share the profits. REUTERS/Robert Galbraith (UNITED STATES – Tags: BUSINESS SOCIETY TRAVEL)

The Grand Canyon Skywalk is a horseshoe-shaped cantilever bridge with a glass walkway at Eagle Point in Arizona near the Colorado River on the edge of a side canyon in the Grand Canyon West area of the main canyon. USGS topographic maps show the elevation at the Skywalk’s location as 4,770 ft (1,450 m) and the Colorado River’s elevation in the base of the canyon as 1,160 ft (350 m). They show that the height of the precisely vertical drop directly under the skywalk is between 500 ft (150 m) and 800 ft (240 m).

David Jin, an entrepreneur who had been involved with tourism and the Hualapai Nation for some time, had the idea of extending a platform out over the edge of the Grand Canyon. With the help of architect Mark Ross Johnson, that idea evolved into a rectangular walkway and eventually the “U”-shaped walkway that has now been constructed.

The overall Skywalk width is 65 feet (20 m). The Skywalk length extending out from the post supports closest to the canyon wall is 70 feet (21 m). The outer and inner 32-inch-wide (810 mm) by 72-inch-deep (1,800 mm) bridge box beams are supported by eight 32-by-32-inch (810 mm × 810 mm) box posts having four posts on each side of the visitor’s centre, once completed. The eight posts are anchored in pairs into four large concrete footings that are in turn anchored to the bedrock by ninety-six 2 1⁄2-inch-diameter (64 mm) DYWIDAG (acronym pronounced Doo-Wee-Dag) high strength steel threaded rod rock anchors grouted 46 feet (14 m) deep into the rock.

Fine-tuning of the project occurred after a wind loading and pedestrian induced vibration analysis. Two tuned mass dampers were installed inside the outer box beam and one inside the inner box beam at the furthest extension of the Skywalk to reduce pedestrian footfall vibration. The walkway can carry 822 people that weigh 200 pounds (91 kg) each without overstress, but maximum occupancy at one time is 120 people.

The Skywalk was assembled on top of the canyon wall in line with its final placement and moved into final position by a jack and roll rig. The Skywalk infrastructure itself weighs a little over 1,000,000 pounds (450,000 kg), without counterweights, but including the tuned mass dampers, railing hardware, glass rails, glass deck and steel box beams. At the time of roll-out, the Skywalk weighed approximately 1.6 million pounds (730,000 kg). The process was completed in two days.

Astronauts Buzz Aldrin and John Herrington attended the opening ceremony on March 20, 2007. A National Geographic documentary film on the construction of the Skywalk has been published.

Cornerstone Of A Larger Plan

According to Hualapai officials, the cost of the Skywalk was $30 million. Future plans for the Grand Canyon Skywalk complex include a museum, movie theatre, VIP lounge, gift shop and several restaurants, including a high-end restaurant called The Skywalk Café, where visitors will be able to dine outdoors at the canyon’s rim. The Skywalk is the cornerstone of a larger plan by the Hualapai tribe, which it hopes will be the catalyst for a 9,000-acre (36 km2 ) development to be called Grand Canyon West; it would open up a 100-mile (160 km) stretch along the canyon’s South Rim and include hotels, restaurants, a golf course, casinos, and a cable car to ferry visitors from the canyon rim to the Colorado River, which has been previously inaccessible.

Access to the Skywalk can be made from Las Vegas, Nevada in the north of Kingman, Arizona, in the south, via Highway 93. The routes converge (at CR 7/Buck and Doe Rd) near Diamond Bar Road. 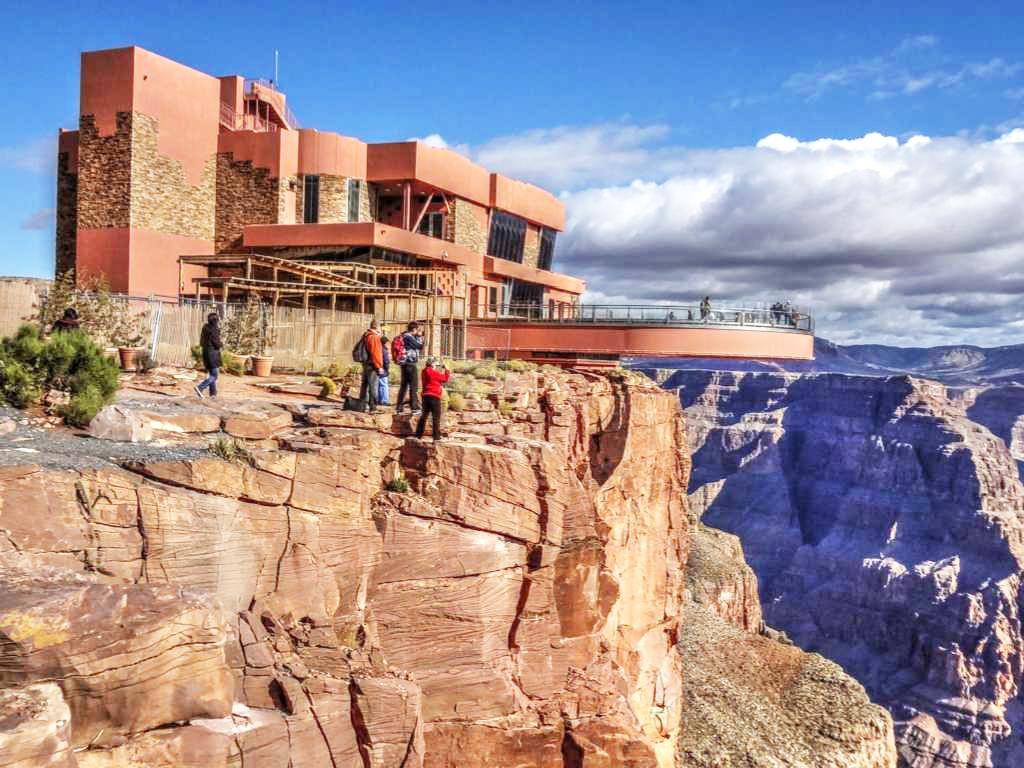 There are several packages available for purchase at the airport terminal visitor centre. Every package includes parking at the terminal and shuttle bus transportation to the two scenic viewing areas and the Hualapai Ranch. As of 2015, the final 9 miles (14 km) of the county-maintained road to the attraction has been paved and is now accessible to everyone. In addition to admission, visitors may purchase professional photographs of their visit to the Skywalk in the gift shop, as personal cameras are not allowed on the Skywalk itself. Along with other personal property, they must be stored in a locker before entering the Skywalk. Besides the Skywalk, the Eagle Point offers other activities, i.e., Native American dances in the amphitheatre, Native American gift shop, and Native American Village with dwellings of the region’s indigenous tribes such as Hualapai, Plains, Hopi, Navajo, and Havasupai. Buses connect all the points within the Grand Canyon West area.