When considering durability of concrete, chloride attack is the most imminent enemy. In the presence of oxygen and water, chloride attack corrodes the steel reducing the strength of the structure drastically.

Chloride ion (Cl-) is formed when the element chlorine gains an electron or when a compound such as hydrogen chloride is dissolved in water. High concentrations of chloride ions in concrete, due to their electro-chemical nature, break down the passive layer of reinforcing steel, without the need to drop the pH levels. Corrosion takes place as the chloride ions react with steel and the surrounding passive material to produce a chemical process which forms hydrochloric acid. The hydrochloric acid reacts with the steel reinforcement, whereby the volume of steel is increased due to corrosion leading to concrete cracking, spalling and eventually failure of concrete.

There are two main sources of chloride ions, one is from the concrete making materials, and the other from the surrounding environment. The first could come from aggregates, admixtures, and from water used for making concrete and the second comes mainly from the concrete being exposed to marine environment such as sea salt spray, direct seawater wetting, concrete being in contact with soils that are rich with chlorides deposits or it can come from de-icing salts and use of chemicals. It is by the process of diffusion that chloride penetrates the concrete. The main problem involving the corrosion of the steel is the spalling of the concrete cover. The oxide resulting from the corrosion is very porous and takes up to 10 times the volume of the steel which causes the break-up of the concrete.

The Rapid Chloride Permeability Test (RCPT) is a test that uses the total charge, driven by an applied electric field of 60 Volts, passing through a 2-inch thick and 4-inch diameter concrete sample over a period of 6 hours, as an index of the concrete permeability. This test has been standardized as ASTM C 1202/AASHTO T 277. The specimens are vacuum-saturated with de-aired water before testing. An electrical current is conducted from the power source by placing one end of the sample in a 0.3 N NaOH solution and the other end in a 3.0% NaCl solution. Although the test is intended as an indirect measure of the concrete pore system network, anything that changes the concrete resistivity will change the results. For example, certain admixtures such as calcium nitrite change the pore solution conductivity and change the results. Likewise, conductive fibers or aggregates that contain hematite can change the concrete electrical resistivity without changing diffusion properties. Changes in the vacuum pressure used during saturation or other specimen conditioning prior to testing can also change the sample resistivity due to the effect of the degree of saturation of the tested specimen on the measured result.

The Rapid Chloride Migration Test (RCMT, NT Build 492) uses electrical voltage to accelerate chloride migration. The test specimen shall be 4 inches in diameter and 2 inches thick, and prior testing the specimen is vacuum-impregnated with saturated lime solution as described in NT Build 492. After the specimen is prepared, the concrete is exposed to a 10% NaCl solution on one side and a 0.3 N NaOH solution on the other. The test starts by measuring the initial current through the sample for an applied 30 volts. 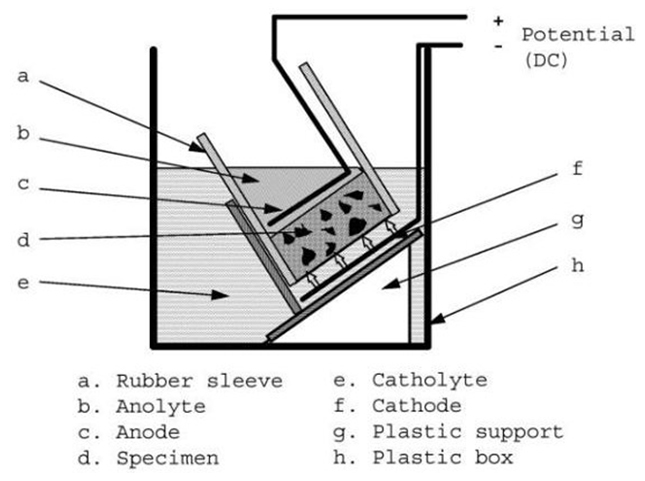 The initial and final current through the specimen and specimen temperature are measured. After the test duration is completed, the concrete specimen is split open and a 0.1M silver nitrate reagent is applied to the sample. The chloride penetration depth, as evidenced by the precipitation on the specimen of silver chloride, is measured at least seven depths to an accuracy of 0.1mm (0.0039 inch). The surface chloride content can optionally be measured by cutting a 5mm (0.197 inch) concrete slice on the surface exposed to the chloride solution and measuring the acid-soluble chloride content in the slice. This chloride content can be used to get information on the concrete sample chloride binding capacity.

Use Of Secondary/Supplementary Cementitious Materials (SCMs)

The addition of SCMs to concrete can substantially increase the concrete’s resistance to chloride ingress. The use of SCMs can improve concrete’s durability, resistance to degradation due to multiple mechanisms, and strength gain behaviour. SCMs have two primary forms of reaction that influence the properties of the concrete. The hydration and chemical reactivity of SCMs are functions of their compositions, with many SCMs showing varying ranges of each type of reactivity.

The material will react with water to form strength-bearing phases, with or without the presence of Portland cement. SCMs of this form typically will contain both calcium and reactive silicates.

The SCMs will react chemically with water and the hydrated cement paste to form additional strength-bearing phases and cause a densification of the microstructure. Pozzolanic materials are typically siliceous in nature and need not contain lime-bearing phases. The reaction rates of SCMs impact their influence on the pore structure, and as a result reducing the rate of chloride diffusion through concrete. For the purpose of this study, the following materials were used in concrete and the test results evaluated to study the chloride migration characteristics of concrete:

Ground Granulated Blast Furnace Slag (GGBS): Ground granulated blast-furnace slag, is a by-product of steel production. Slag is primarily composed of CaO, SiO2, aluminum oxide (Al2O3), and magnesium oxide (MgO). When used as part of a Portland cement concrete, slag reacts with both the water (latent hydraulic reaction) and the hydrated cement paste (Pozzolanic reaction), resulting in a more refined microstructure than that of a plain Portland cement.

Fly Ash: Fly ash is a by-product of coal combustion and composed primarily of silicon dioxide (SiO2) and calcium oxide (CaO). When added to concrete, fly ash reacts with the hydrated cement paste in a primarily Pozzolanic reaction; the result is a denser microstructure over time.

Concrete trials were conducted with the following proportions: a). OPC alone.

The test method used to find the chloride ingress resistance of the concrete was the NT Build 492 test. The NT Build 492 test comes from the Nord Test (Based in Finland) family of test methods. This is an alternative to ASTMC1202, and the result is a chloride migration coefficient from non-steady state migration experiment, DNSSM x10¯12m2/sec, that can be used to access the quality of concrete. NT Build 492 is adopted widely in Europe and the USA. It is also fully adopted in China, as the National Standard GB/T50476. Apart from the above some experiments were also conducted by using the ASTM C1202 test method, with the mix proportion given in the Table 1 for Sr. No. 18 to Sr. No. 29, the results of the tests are presented in figure 5.

Note: A detailed study on RCPT as per ASTM C 1202 can be found in the article – “Revisiting Rapid Chloride Permeability” by Milind Joshi and Siddika Mapari, POV, ICI 2010.

This test procedure and test conditions can be briefly summarized as follows:

In India awareness about designing concrete structures for durability is slowly increasing, the practice of specifying durability test for qualification of concrete mixes is also increasing at a slow rate. Currently, RCPT tests as per ASTM C1202 is specified for most of the metro rail projects as well as in many roads and bridges in the country, RCPT NT Build has been specified in the Bandra-Worli sea link bridge with limiting factor for pre-qualification of concrete mixes to be <2×10-12m2/sec. Considering technical advantages of the NT Build 492 test method over the ASTM C1202 method and as per the current trends in the industry, NT Build 492 is expected to replace the ASTM C1202 test in the years to come.

All the experiments for RCMT were carried out at the R&D Division of Alcon Construction (Goa) Pvt. Ltd., at Goa, where the test facilities of NT Build 492 is available, the test results of the experiments are tabulated in the Table 1 below and the graphical representation are given in Figure 2, 3 & 4. 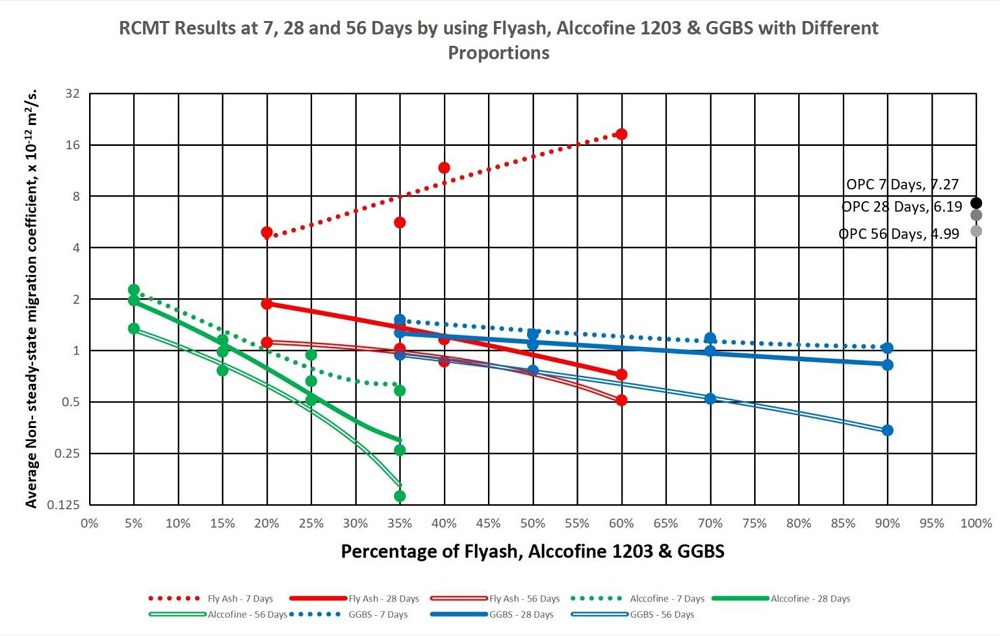 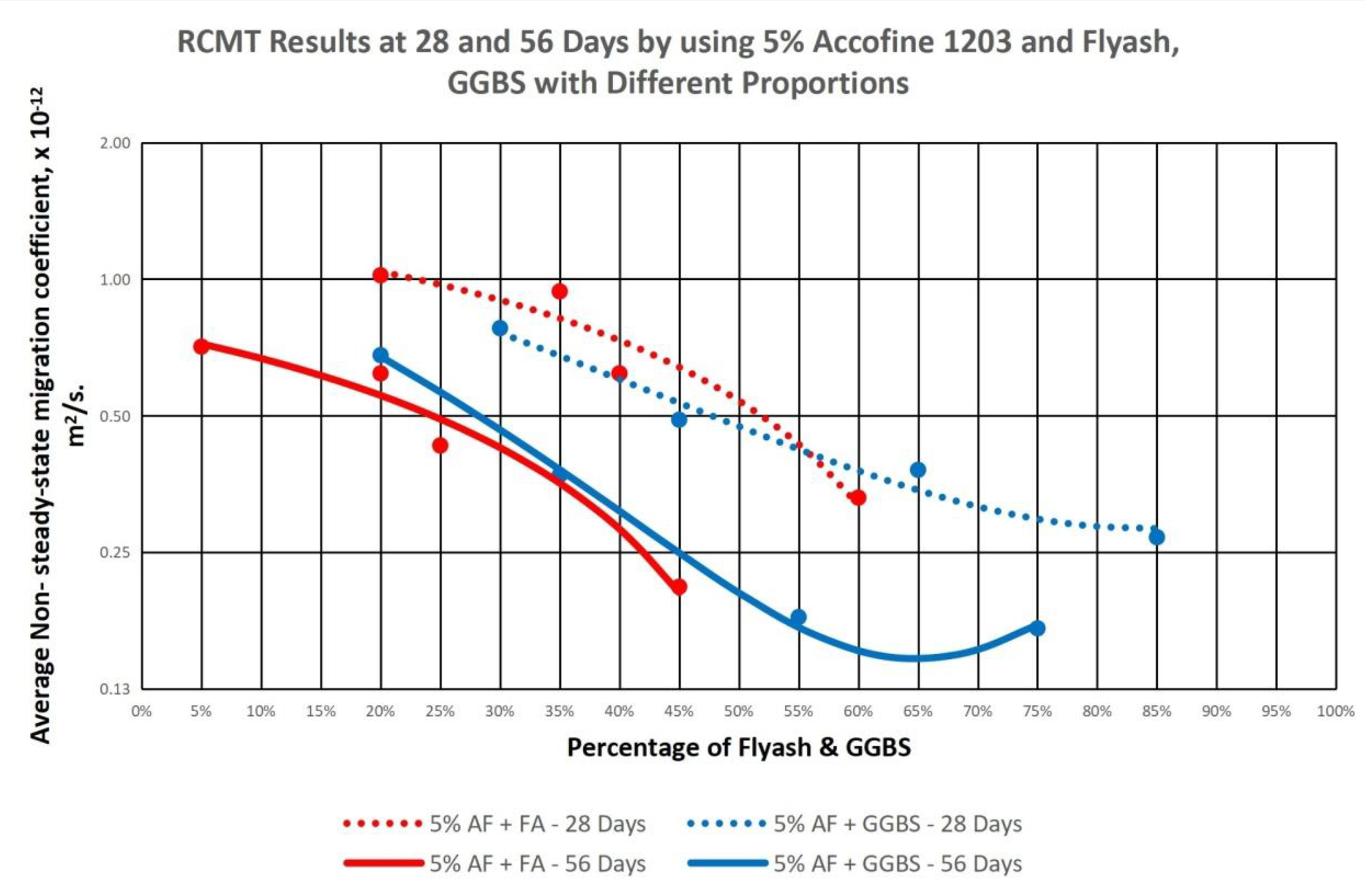 Fig. 3: 28 Days and 56 Days RCMT Results of Concrete with 3% of Alccofine 1203 and Fly Ash/GGBS in Varying Proportion 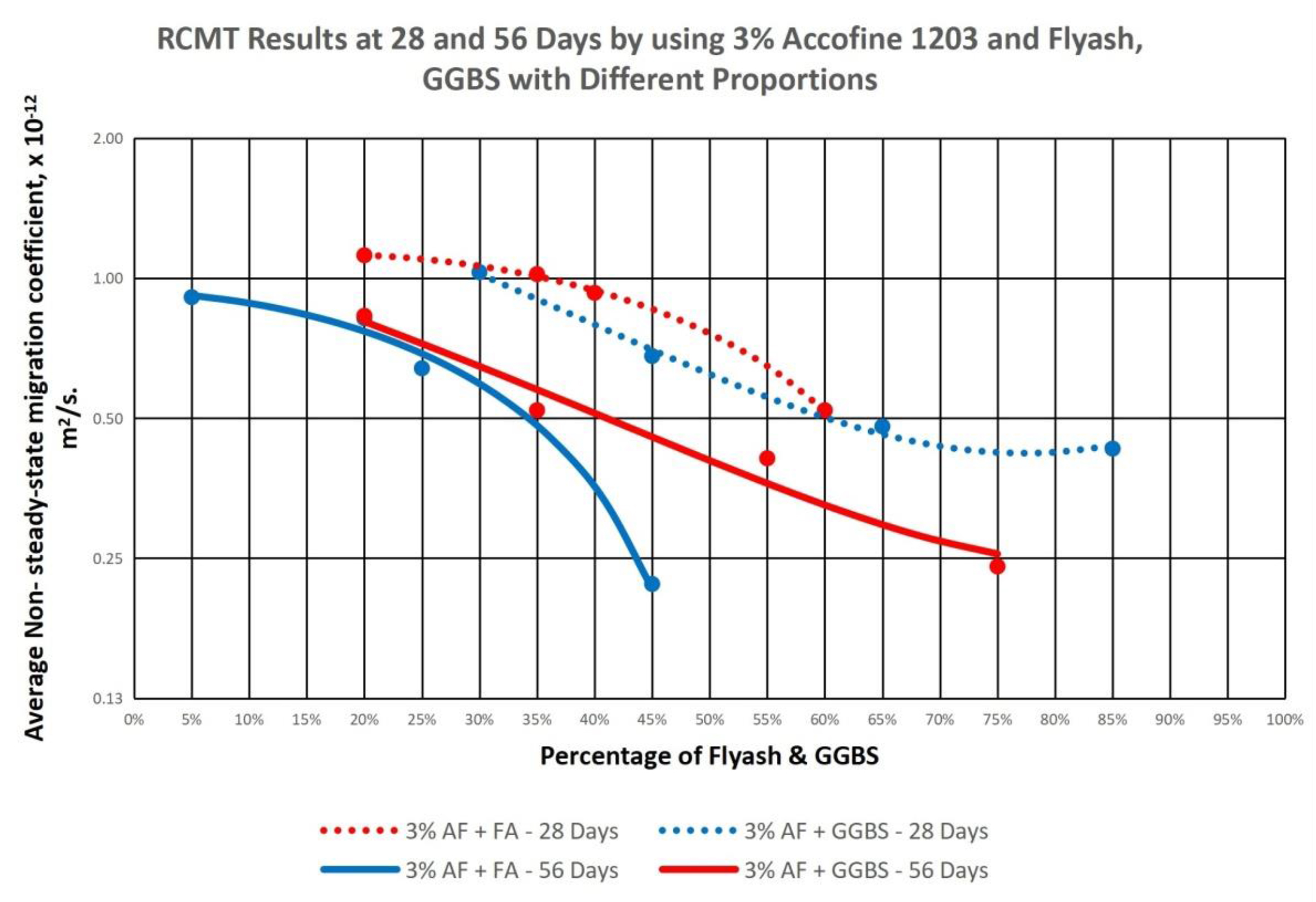 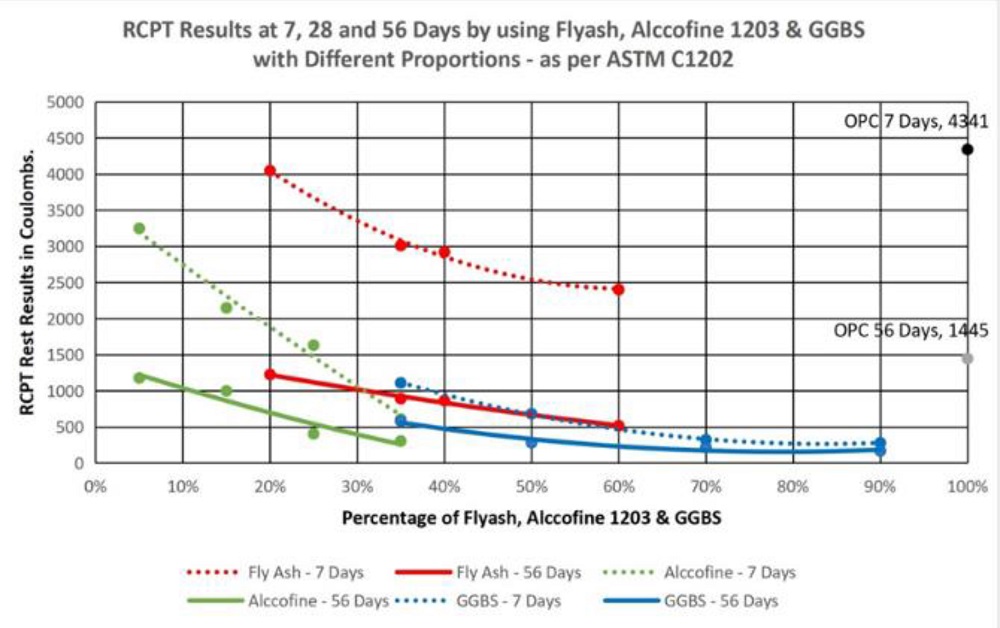 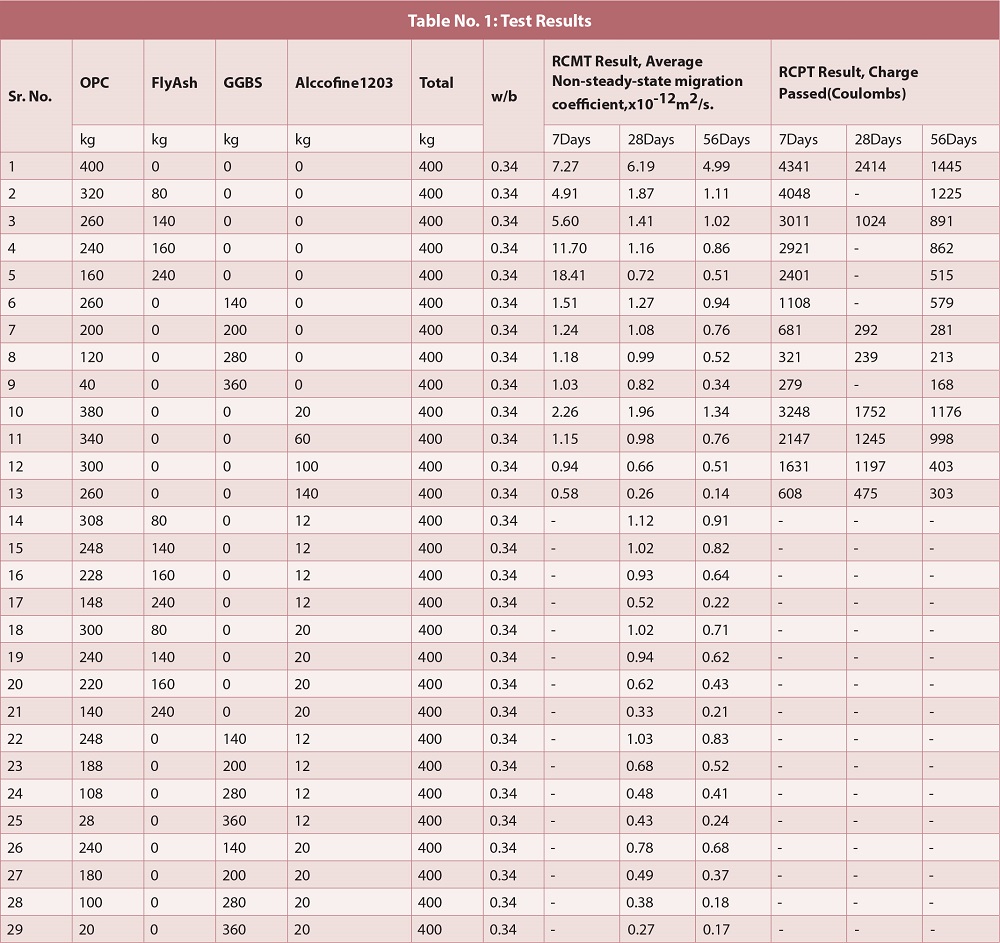 The chloride migration coefficient under non-steady-state (DNSSM) is used for evaluating the concrete resistance to chloride penetration, according to the criteria presented in Table No. 2.