Whether flying around a room or capturing exclusive aerial footage, development in drone tech are presenting fresh potential and applications — particularly in the world of construction.

Technology plays a crucial part in influencing the construction industry. A new technology trend that is gathering interest in the construction industry is the usage of drones. An unmanned aerial vehicle (UAV) or drone is defined as an aircraft and its related elements, which is with no pilot aboard. The drone space arrived at its inflection point in 2013 when Amazon decided to test drones to deliver its orders; since then, the adoption of drones and drone-based services in the retail and commercial space has become a trend.

Consumer and commercial drones have gained popularity rapidly owing to merger and progression in radio communication and smartphones. The commercial use of UAVs was first recorded in the early 1980s in Japan, where they were used to spray pesticides on rice fields. Today, drone technology has advanced significantly and provided new applications for all major industries, such as agriculture and forestry, electrical power supply, geographical mapping, environmental monitoring and film shooting. Though drones were established as a recreational toy or innovative camera, they have quickly become a competitive gain for those keen to employ it to their advantage. 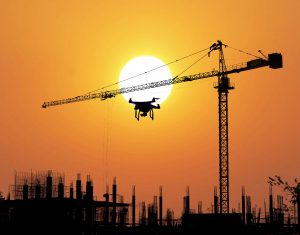 Over the last decade, drones have become one of the most compelling construction trends. While drones in construction aren’t new, construction companies are adopting them at a faster rate than ever before. Today, the influence of drone technology on the digital transformation of the construction industry is unquestionable. Drones are taking an essential place in the construction process and are only growing in popularity and functionality.

The global market has become a hotbed of activity for drones. The global construction industry has experienced a 239% growth in drone use year-over-year, which is higher than any other commercial sector. Further, the overall investment in research and development activities, and a focus on technological advancement are healthy signs in emerging economies, which enable them to enhance their growth. It is estimated that the global commercial drone market will grow at a CAGR of between 16% and 17% from 2017 to 2023. The global UAV market will reach US$ 21.47 billion. 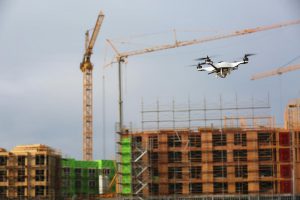 The aerial angle and data collection capabilities of drones make them a feasible instrument, offering an array of benefits, ranging from on-site protection to remote observation. Particularly, they have evolutionised the lifecycle of construction projects, as they offer direct benefits to the construction lifecycle. Such a tool can employ add-on gear such as infrared, geo-locating and thermal sensors to aid mapping construction locations and modelling construction projects. The footage captured can be transformed into 3D models with actual conditions included, allowing improved iteration, higher viability and more accurate proposals during the pre-construction period. Further, their capabilities allow them to cut costs, time, risk, and labour, simultaneously enhancing workflow, accuracy, communication, and competence; this produces more confidence and conviction when working on a construction project.

The creative site managers are incessantly finding new applications for drone technology on construction sites. The areas where drones or UAVs will benefit the construction and post-construction process are detailed below: 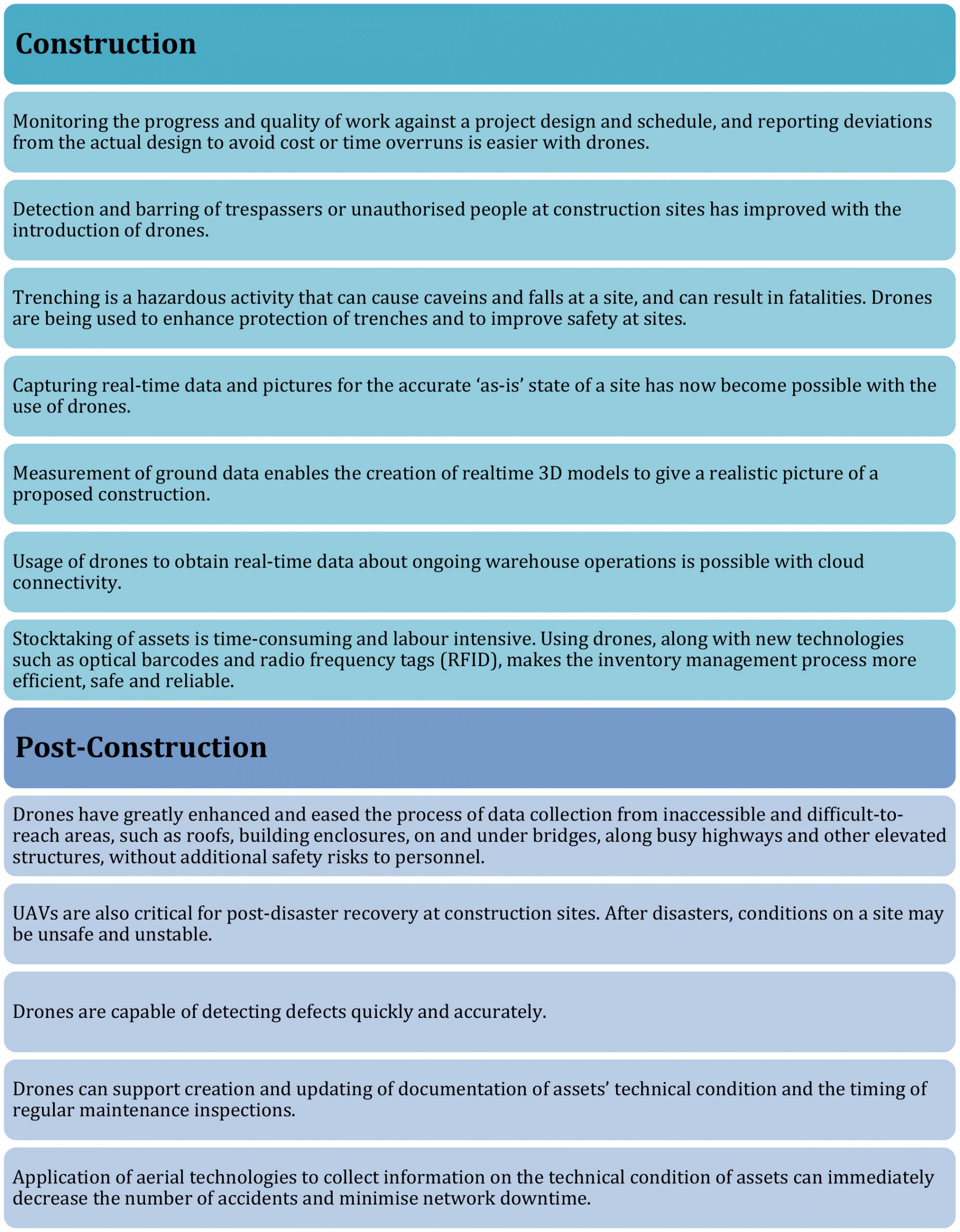 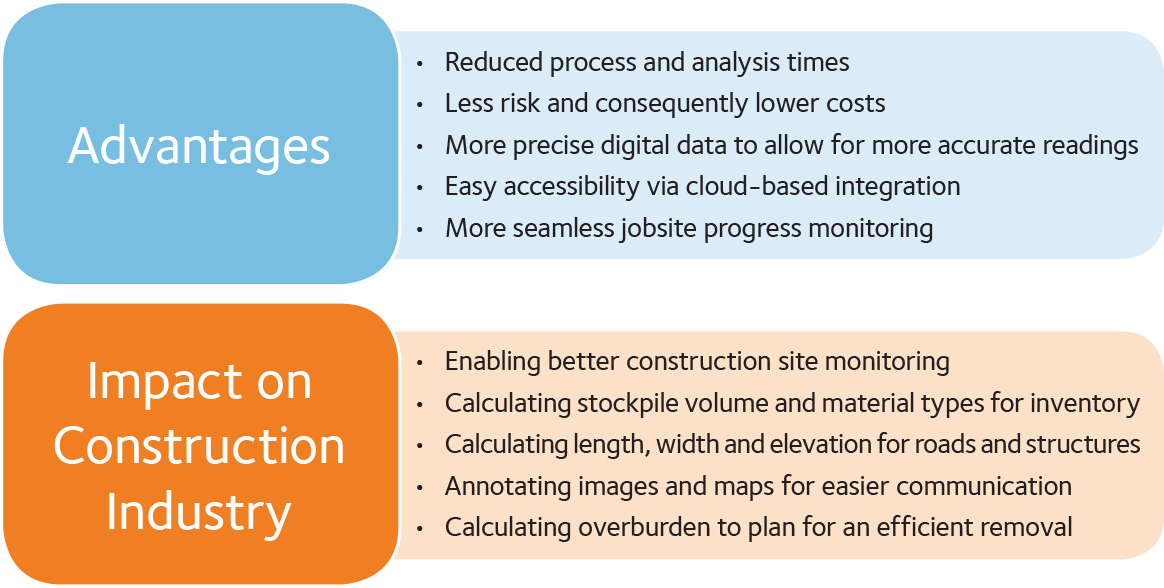 In 2018, leading Chinese manufacturer DJI announced the largest ever order of commercial drones. In partnership with US tech firm Skycatch, this is an unparalleled shipment that has set a benchmark for construction firms around the world. There are also plans in place for these drones, known as the ‘Skycatch Explore 1’ to run robotic construction vehicles. If successful, this could pave the way to a fully automated construction site. In addition, Japanese construction giant Komatsu are also set to receive 1,000 aircrafts to help survey and monitor their projects. 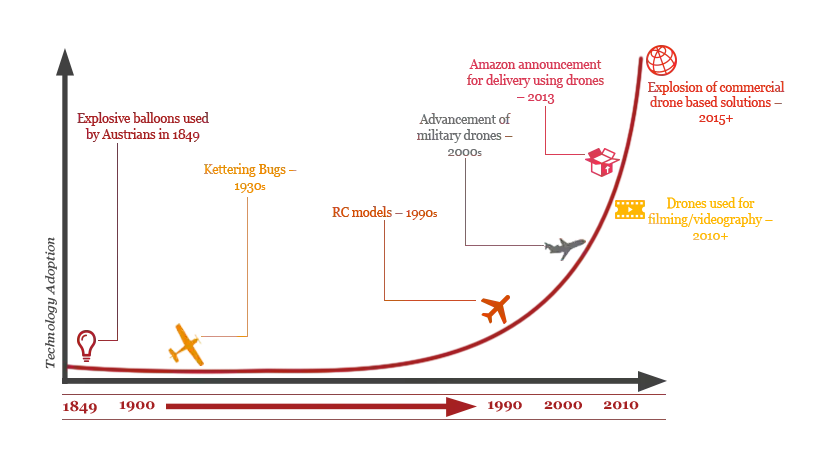 Timeline of Drones and Exploration of Drone-Based Applications

Construction is one of the most dynamic, responsive and unique sectors in the Indian economy. The construction sector is of great importance in the growth of India’s net output, not only because of its total share but also because of its multiplicative factor, and the forward and backward linkages it has with other industries. The multiplier effect of construction is estimated to be in the range of 1.8 to 2, which makes it one of the highest multipliers in the economy; this is due to the high labour intensity in the sector, relatively few imports, and dependence on the extended and diverse supply chain. Therefore, it is essential to ensure increased productivity and competitiveness in the industry.

However, although productivity in the construction segment is 58% higher than agricultural productivity, it lags behind other sectors, and is the only major employment-generating sector that has seen a decline in its productivity over the past few years. Since it is a labour- and input-intensive industry, the only way in which it can increase its productivity is by cutting costs and making the required processes efficient.

The most significant measures for ensuring successful avoidance of accidents include periodical examination of construction sites. As a result of seismic transformation in the Indian construction industry, with technology playing a pivotal role, the drones technology is the solution. Drones are a valuable means towards constructing smart cities in a lucrative, quicker and safer manner with optimal utilisation of skills and efforts.

Based on the type, the Indian drone market has been segmented into Fixed Wing, High-Altitude Long Endurance (HALE), Unmanned Combat Aerial Vehicle (UCAV), Medium-Altitude Long-Endurance Unmanned Aerial Vehicle (MALE) and others. In 2018, MALE segment dominated the market and is anticipated to maintain its dominance over the next five years as well.  By Payload, the drones are divided into the categories – less than 250 g, 250 g-2 kg, 2 kg-25 kg, 25 kg-250 kg, above 250 kg.

In India, there are six segments across which drone-based solutions are being explored, among which infrastructure and agriculture are seeing the most traction, in line with global trends. The segments are: 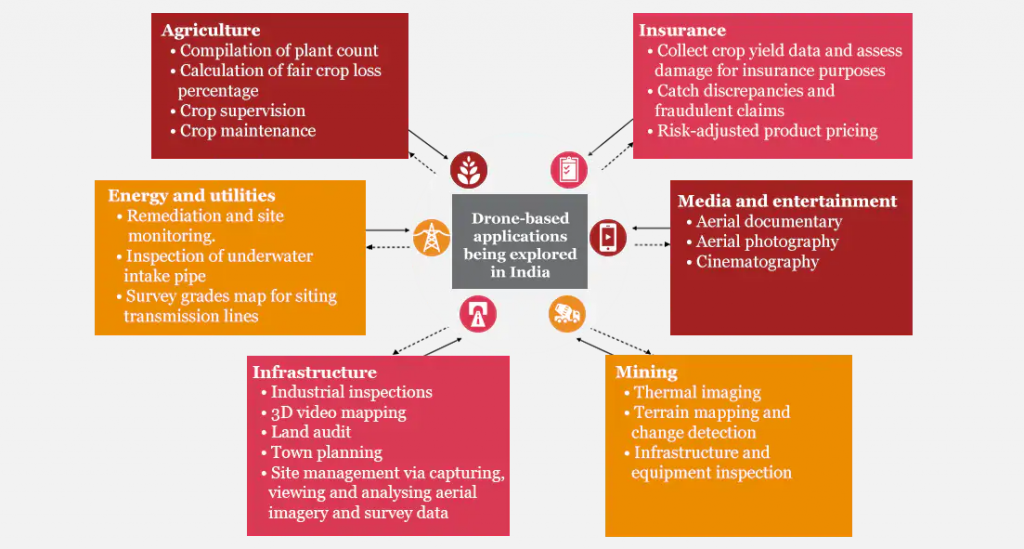 Applications of Drones in India

According to a recent industry report, India is one of the fastest growing markets for UAVs. With 22.5% of the world’s UAV imports, India tops the list of drone-importing countries and the growth is set to increase manifold. The country’s major imports in drones currently include products required for military purposes. The commercial drones are expected to display a steady climb as well. By 2021, the Indian UAV market is expected to reach $885.7 million (nearly 4 per cent of the global market at US$ 21.47 billion) during 2017-23 at a CAGR of 18%. This uptake is prompting governments to frame policies and regulations on use of drones, such as:

There are numerous safety and legal implications that one should be aware of, as well as the differences between the commercial and personal use of drones. Despite the increasing adoption and regulations, there is still tremendous growth in the use of drones in construction. Moreover, the government of India is pushing the ‘Make in India’ programme to boost domestic manufacturing of these drones in the coming years.

In the present scenario, it is very critical for India to understand the aerial revolution that can be brought about by the appropriate use of drones, which have been accepted as a highly viable commercial instrument worldwide. In fact, the most noteworthy sector of the economy being benefitted by drones is construction and there is no denying on the fact that there is an inevitable rise of commercial drones: a market set to be worth billions over the coming years. It is expected that by the end of the next decade, the employment of drones in the construction sector will record a manifold escalation and will play a principal role in innovative buildings.

As a result of its notable multiplier effect, and linkages with other sectors, construction considerably influences employment and job creation. According to the Economic Survey 2017-18, the construction sector employed a workforce of 40 million in 2013, and is projected to employ 67 million by 2022. However, over 80% of those employed in the sector are either unskilled or minimally skilled. The introduction of drones in this sector has the power to bring in a shift in this paradigm, as the demand for drones on construction sites is expected to prompt an increase in the demand for skilled manpower in drone operations.

The Construction Industry Development Council (CIDC) conducted a research to evaluate the impact of drones on employment creation across 13 sub-sectors in the construction and maintenance industry. The study approximates the manpower requirement, that is, people with UAV or drone operating skills, to be approximately 2.5 lakhs in the coming years, with highways, roads, bridges and housing taking the lead. According to the CIDC, future operation of UAV technology and its better reception in several different applications across varied stakeholder base has the potential to enhance the demand for professionals who are competent to use this technology.

As policies change in India, drones will set new standards in adding value to the economy. The safety, competence and cost benefits of drones, which the military has utilised till now, also draw variety of businesses, and construction is one of these. While the impact of drones in the construction industry is still in process, they are already revolutionising the sector and altering the approach towards handling of construction projects. Providing the technology is capable of passing centralised aviation and zoning hurdles, it is safe to say that the commercial drone is here to stay. As the industry develops and construction projects become more intricate, the use of drones in construction will continue to escalate.