The proposed Mumbai Trans Harbour Link (MTHL) has been planned to facilitate decongestion of the island city by improving connectivity between the Island city and the mainland (Navi Mumbai) and the development of the Navi Mumbai Region. The link was envisaged about 35 years back. A project driven by MMRDA is estimated to cost `14,262 crore (US$2.0 billion). On completion of this project, the commuters travelling from Mumbai towards Navi Mumbai, Navi Mumbai International Airport, Jawaharlal Nehru Port, Panvel, Alibaug, Pune and Goa will not only be saving travel time but will also have in terms of fuel.

There was a formal tender floated by MMRDA which was participated by almost all the leading and sonic pipe suppliers of the town. Further, being India’s longest bridge – the durability of the products was the main aspect that the client was looking at. However, Dextra Group an ISO 900:2015 certified Bureau Veritas was awarded the two packages considering Dextra’s technical expertise, long-lasting durability and ease of flexibility to customize the products as per the client’s and contractor’s requirements.

Execution Of The Project

The major portion of the MTHL structure is on marine stretch and hence corrosion was one of the painstaking factors that was being evaluated. And the structure had been designed for more than 100 years, so the client and the consultant wanted to ensure its durability and execution. Hence, as per the specifications, galvanized coated Sonitec pipes 50mm and fusion-bonded epoxy couplers were to be used. 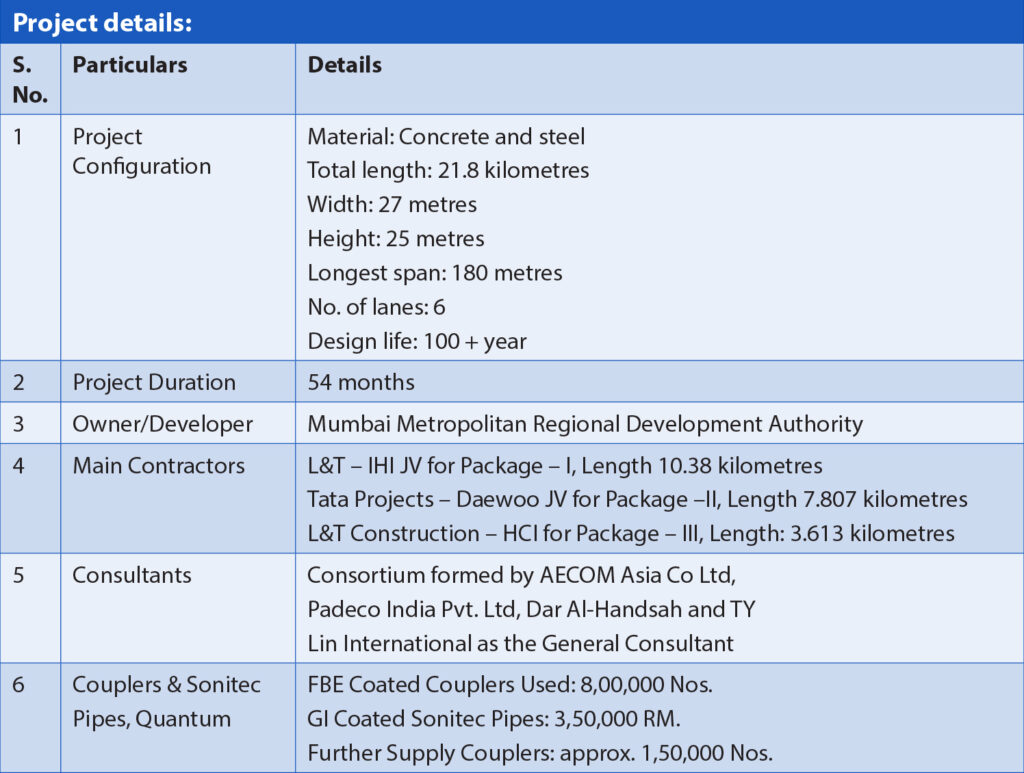 Contributing (even though in a little way) in the development of a country’s infrastructure is not only a matter of pride but also carries an emotional value for us. The insights and learnings on the innovative techniques that were used helped to add a new product line to our catalogues. It is indeed a great privilege to work with the best construction giants of India – L&T & Tata Projects.