How will Robotics Change the Construction Industry?

Technology is transforming the construction and project management landscape in several ways. The increasing reliance on technology, along with robotics, to tackle the complexities of mega projects, has started pushing companies to explore new and cost-effective solutions.

Construction automation and robotics technology are the buzzwords in countries such as Japan and the US, and the time has arrived where extensive human-technology collaboration can transform the industries in a big way. On the global front, construction industry is already witnessing breakthrough in the form of new technology-based developments such as automated vehicles for digging and loading materials, drone-assisted surveillance and robot-assisted bricklaying.

A New York-based company Construction Robotics has successfully created a robot called Semi-Automated Mason (SAM), whose margin of error is now measured in millimetres. It can apply mortar to any size brick and place one every 8.5 seconds; while a human mason can lay 300-600 bricks in an eight-hour shift, Sam can lay more than 3,000. Saudi Arabia is also likely to involve robotics technology to meet its housing initiatives. 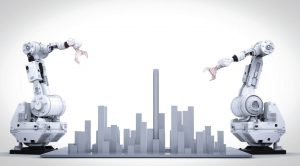 Why Is There A Need For Construction Robotics And Automation?

Construction is one of the highest waste generating industries in the world. According to the US Green Building Council, 30% of total waste in the United States alone comes from building construction. Further, the increase in population in areas such as Sub-Saharan Africa and India indicate that a large percentage of near-future building projects will need to be constructed in resource-scarce areas where supply chains are non-existent or underdeveloped. Thus, with a rapidly growing population in a world of dwindling resources, the construction industry will need to find ways to build more with less.

Another issue is the construction industry’s much-bemoaned shortage of skilled labour. While this reflects a plunge in vocational training and the need for more training and retaining, it is also an opportunity for automation to fill the gap. Robotics technologies are being developed and more widely distributed at an ever-greater pace, creating a positive feedback loop that leads to lower costs, more research, and more development. Industries such as manufacturing, aerospace, and even the service sector have realized productivity gains through the automation technologies, and now such technologies are beginning to become more available for construction.

Industrial robotics is the need of the hour to resolve the technical challenges and scale up productivity, while also tackling the issue of lack of skilled workforce. A report by McKinsey Global Institute says that builders and construction workers will witness a growth of 18 per cent by 2030, at a time when the country is expected to lose nine per cent of work hours to automation by 2030.

While developed countries such as Japan are aiming for a robotics revolution across various sectors, including construction, the robotics industry in India is still at an emerging stage. However, India is poised for growth. Many renowned companies and start-ups are exploring ways to use potential of Artificial Intelligence (AI) and robotics in the construction processes. Endless Robotics, a Hyderabad-based Indian start-up, is working towards building intelligent robots to solve dull and dirty problems for construction, maintenance and smart city management. The robot, called WALT, can paint walls about 30 times quicker than a human at a speed of about 60 sq. ft. per minute and can work at heights from 8 ft to 14 ft. 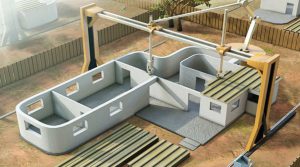 3D Printing of a House

So, there is clearly a wider scope for the implementation of these technologies in the construction process, right from the initial design stage to on-site construction works to building maintenance functions. Moreover, it can help minimise labour dependence while ensuring increased productivity and quality.

With initiatives like ‘Make in India’ and ‘Digital India’, India can leap towards advanced robotics and compete with the world’s best. In 2015, Make in India invested over $13 billion in robotics and India is expected to undergo a massive revamp in terms of investment, infrastructure, and technology. Globally, the use of robots is growing at a rate of 6.73 per cent per annum, while the growth in India has been around 12 per cent. Further, for the Smart City Mission and the Housing for All by 2022, there is a requirement for smart real estate and fast-track construction with a growing need for advanced machineries and automation of roads, tunnels, bridge construction, etc.

The Use Of Robotics And Automation In Construction

Robots also help cope with mundane activities like lifting, shifting, loading unloading and other kind of repetitive jobs, reducing dependence on human intervention and external factors such as fatigue, interest, skills, work timing and human errors. Apart from addressing the issue of productivity, robots also play a key role in challenging work environment like mines and tunnelling, where work has to be conducted in confined spaces and extreme weather conditions: human intervention in these areas is impossible. The use of robotics can also help address: 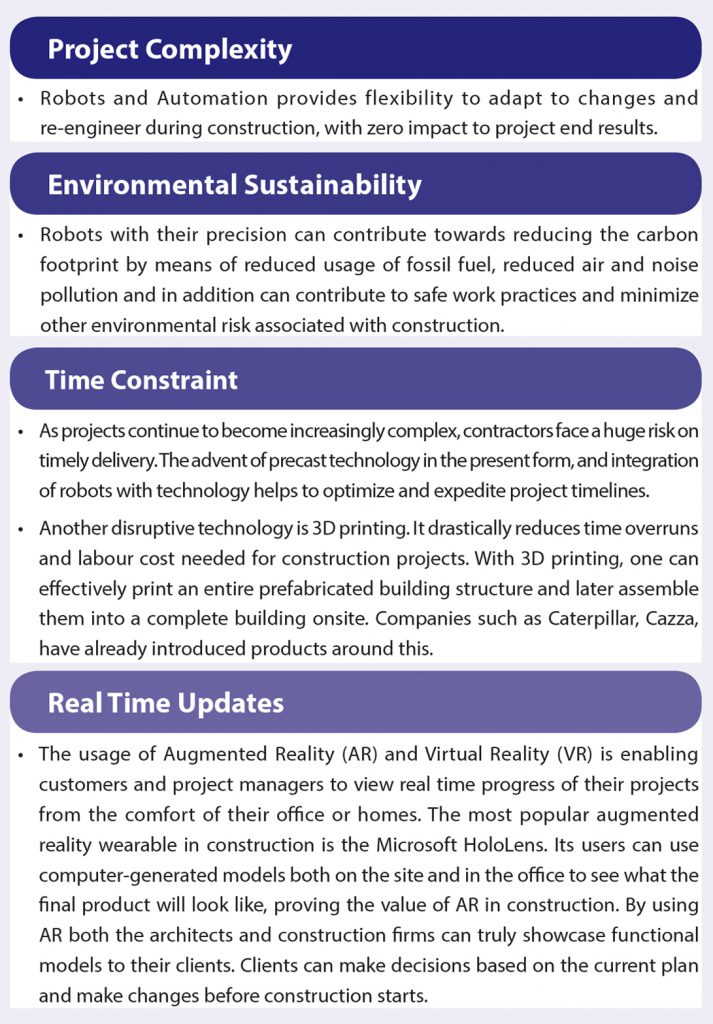 The day is not far when robots working on project sites will become a common occurrence. Drones, which are already in use to an extent will constantly scan sites to collect data, predict and solve problems before they arise. Humans will be able to remotely oversee multiple projects at once. The industry will become increasingly focused on innovation. Construction will become faster, using 3D and 4D printing, and self-transforming objects, which self-assemble. 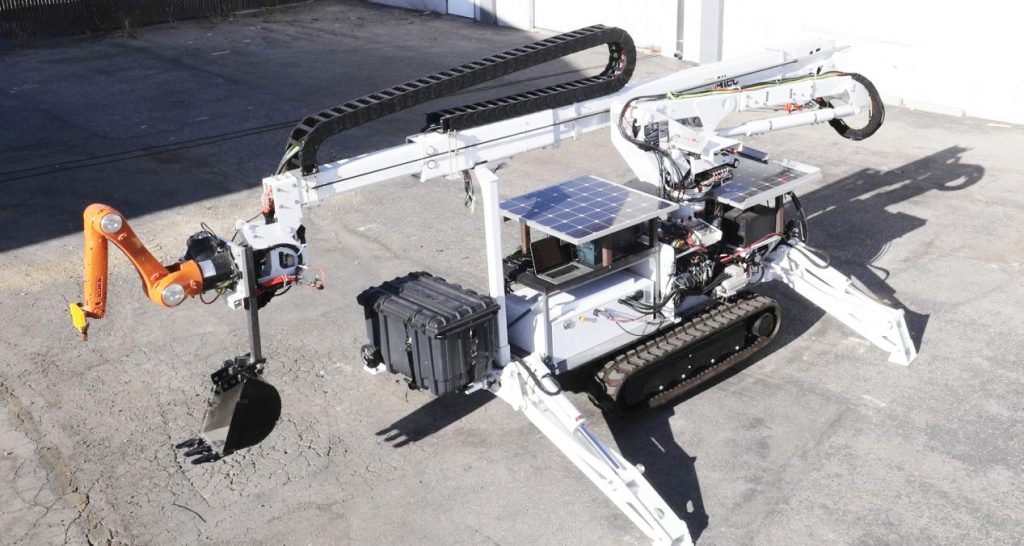 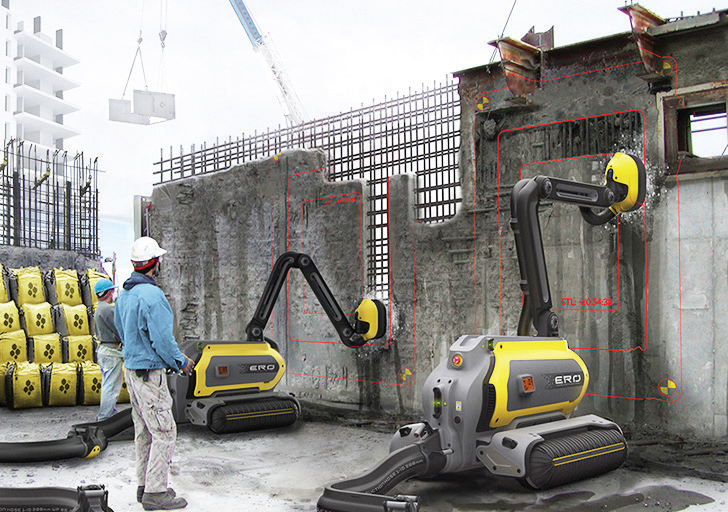 With the tremendous progress that this field has demonstrated in the past couple of years, it will not be wrong to assume that the future of construction industry is going to be dominated by robotics. We are closer to witnessing technology becoming an everyday affair, earlier than imagined.