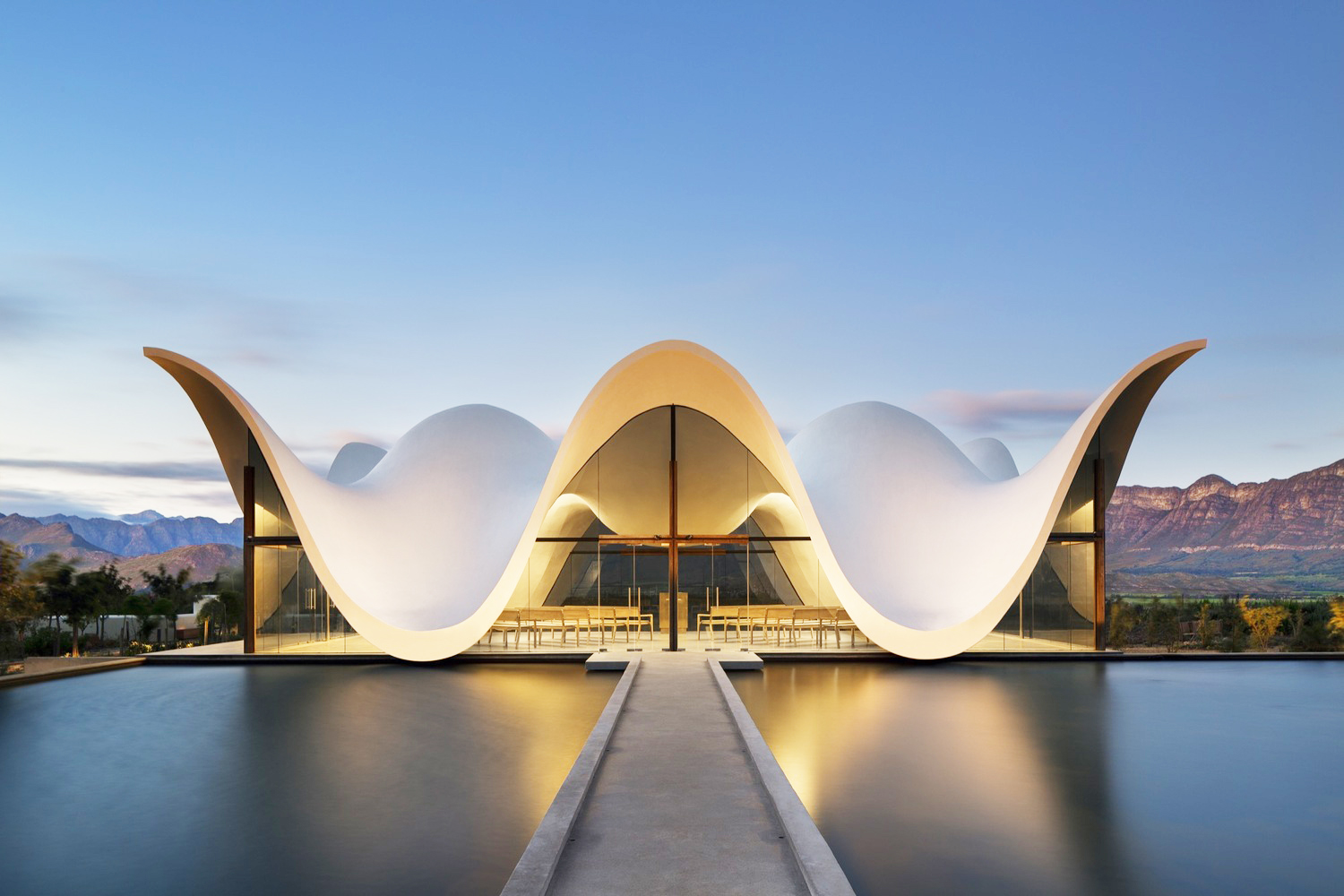 Your first glimpse of Bosjes Estate just might jolt you out of your seat. It might look like a spaceship in the middle of the Cape Winelands’ Breede Valley. Just a 90-minute drive from Cape Town and you will arrive at  South Africa’s newest hotel and restaurant, which opened in February on a historic 2,500-acre farm. It is unlike anything the wine country has ever seen, thanks to a futuristic new chapel.

The new chapel, set within a vineyard, is designed by South-African born Coetzee Steyn of London-based Steyn Studio. The construction started in 2013 and was completed in December 2016. Its serene sculptural form emulates the silhouette of surrounding mountain ranges, paying tribute to the historic Cape Dutch gables dotting the rural landscapes of the Western Cape. The 6 m high building was conceived as a lightweight, dynamic structure that appears to float within the valley, an effect accentuated by an adjacent reflective pond.

Rainwater is discharged from the middle of the roof via a submersible pump with sump, through a pipe cast into the concrete whose outlet is hidden under the lowest part of the roof, where it meets the reflection pond.

The crisp white form is conceived as a lightweight and dynamic structure that appears to float within the valley. A reflective pond emphasises the apparent weightlessness of the structure. Elevated upon a plinth, the chapel rises from the flat land it sits upon, providing a hierarchical focal point within its surroundings.

To achieve this visual result, the entire building had to be simple, unifying and fluid, while structurally efficient. Constructed from a slim cast concrete shell, the undulating roof rises to form six peaks – one at each corner and one in the middle of each long elevation. It is supported at four points where it falls dramatically to meet the ground. Here, expanses of glazing are framed in timber to give the appearance of crucifixes. 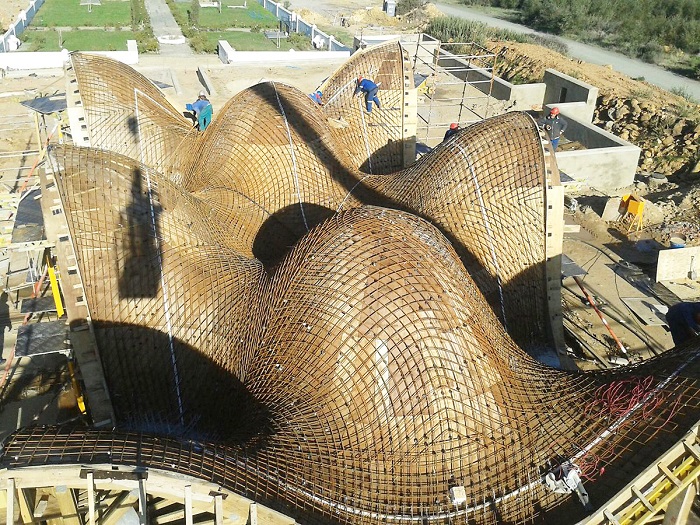 The intricate roof of the Bojes chapel measures 20 m long by 12 m wide and 6 m high at the top apex. The professional and project team selected shotcrete as the chosen project construction with a 1:50 concrete demo ‘cup’ constructed in the PERI Cape Town yard. The concrete demo proved invaluable in the planning of the project.

Inspired by the simplicity of the Moravian Mission Stations established on Cape Dutch farms in the 19th century, the chapel lacks a spire – relinquishing a sense of significance in relation to its impressive natural surroundings. An open embrace that invites in, the chapel is also a space that extends outwards into the valley and mountains beyond, raising the awareness of God’s creation in the immediate environment.

Lastly, the whole structure was covered with plywood, which had first been soaked for 24 hours to give it enough flexibility to follow the curves of the design. After this, 8,175 kg of steel rods were combined with spray-cast concrete to effectively create the roof. Though the structure appears weightless, the entire weight of the chapel rests on four hidden buttresses, each of which supports a vertical load of more than 50 tonnes.

Despite the building’s apparent simplicity, the conception and construction of the roof was anything but banal. All formwork was purposemade and was designed as a system of prefabricated trusses with a bent plywood skin. It took almost five months to construct the formwork on site. A 1:2 scale sample section of the roof was constructed in the contractor’s Cape Town yard to workshop all details and finishes. 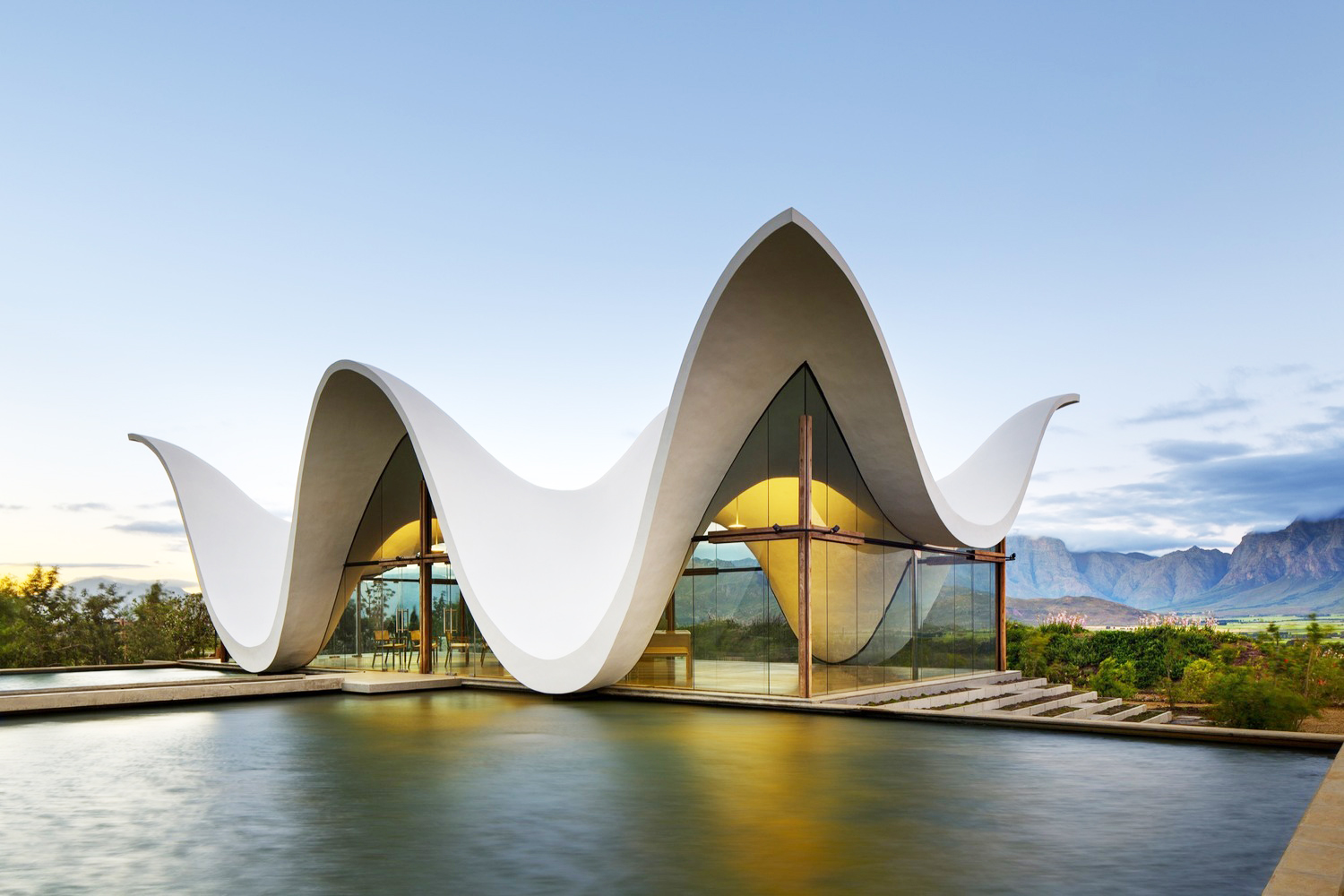 Due to the unusual form of the shell, each reinforcing bar (top and bottom) had to be individually cut and hand-bent to fit. The concrete was poured in the form of shotcrete – pneumatically projected at high velocity through a hose. This had to be done from mobile platforms and was frequently delayed by strong winds and rain, taking six weeks instead of the two allowed in the original programme.