The first algae-powered building in the world

The world’s first algae-powered building in Hamburg, Germany, the 15-unit Bio Intelligent Quotient (BIQ) House, is a four-storey residential building, which was launched as a part of the 2013 International Building Exhibition. It was launched with the aim to test the world’s first ‘bio-adaptive’ façade, which uses micro-algae to shade the building as well as generate energy. The BIQ House is the first building in the world to have a bioreactor façade.

The structure, which features a bio-adaptive algae façade, was built by international design firm Arup in collaboration with Germany’s SSC Strategic Science Consultants and Austria-based Splitterwerk Architects. Arup is the design and engineering firm that brought the world the Centre Pompidou and the Sydney Opera House.

The apartment building was conceived as part of a European movement to design carbon neutral, self-sustaining, and renewably powered structures. The BIQ was funded in large part by the German government to incentivize the development of new adaptive, smart construction materials. Algae was selected as of all the technologies on display, algae power is perhaps considered with the finest pedigree and greatest potential.

The greenness of the façade, called SolarLeaf, shows that the algae are breaking down the carbon dioxide and processing it through photosynthesis. This renewable form of energy production is thus, visible from outside the building, and is an intentional part of the architectural concept.

The sides of the building that face the sun have a second outer shell that is set into the façade itself. The micro-algae used in the facades are cultivated in these flat panel glass bioreactors that make up its ‘bio skin’, measuring 2.5 m x 0.7 m. In total, 129 bioreactors have been installed on the south-west and south-east faces of the building. This bio-reactive panelling is filled with 200 m2 of algae. The 200 m2 of integrated photo bioreactors algae façade comes with a net annual energy supply of about 4,500 kW/h of electricity more than an average household consumes in a year (3,500 kW/h per year).

The BIQ house captures all the energy needed to generate its electricity and heat from the sun, leaving fossil fuels untouched. The bioreactors not only produce biomass that can subsequently be harvested, but they also capture solar thermal heat – and both energy sources can be used to power the building. This means that photosynthesis is driving a dynamic response to the amount of solar shading required, while the micro-algae growing in the glass louvres provide a clean source of renewable energy. 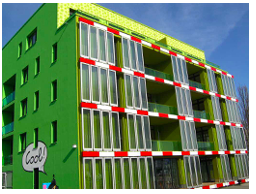 The bioreactors help to insulate the building and keep out noise. The heart of the system is the fully automated energy management centre, which controls each reactor. Here, solar thermal heat and algae are harvested in a closed loop to be stored and the reactors are turned towards the sun. Excess heat from the sun, unused by the algae, is either used directly for solar hot water or stored in tanks under the building for later use.

When the algae hits a certain rate of growth, some of the algae is harvested and taken into the building for processing, where the biomass is converted into biogas which can be burned to provide heat in the winter and electricity. The carbon dioxide from burning the biogas is then used to feed the algae. This façade is the first of its kind in the world and makes use of the very latest energy and environmental technology. 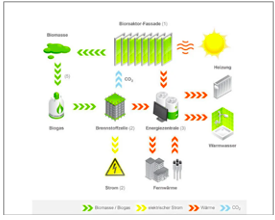 Diagram of the Energy Flow and Operating System Image

These innovative façades contribute to the reduction and removal of 2.5 tons of CO2 emissions from buildings each year. This remarkably sustainable energy concept is therefore capable of creating a cycle of solar thermal energy, geothermal energy, a condensing boiler, local heat, and the capture of biomass using the bio-reactor façade.

The apartment provides the option of ‘living on demand’, where the individual functions of the apartment can be swapped about or combined to form a ‘neutral zone. This innovative living concept is aimed at ensuring maximum design versatility for everyday life and gives us a glimpse into urban life in the future. With its innovative living concept, futuristic exterior, and “intelligent” algae façade, the BIQ is a highlight of ‘The Building Exhibition within the Building Exhibition’. The BIQ building shows that in the future façades will be able to serve a number of different functions and be much more than an aesthetic cladding to protect against rain and cold.