Assessment And Retrofitting Of Buildings

Buildings, with poor quality of construction or in various states of disrepair or dilapidation, are a common sight in cities. Many of these buildings, that serve as living, working and learning spaces, in addition to being eyesores, are highly vulnerable to disasters as evidenced by incidents of building collapse accompanying disasters in India and other countries. The extensive damage to buildings in the earthquake in Gujarat in 2001(3) and in Haiti in 2010(2) illustrate consequences of neglect of building construction, maintenance and repair issues. Considering the high disaster vulnerability of India and high population densities in cities, issues of substandard building stock need to be prioritized to avoid a catastrophe. Based on damage need for repair can be structural, non-structural or both.

As a thumb rule if the cost of repair and strengthening is less than about 50 percent of the reconstruction cost, retrofitting is adopted. It may be possible to retrofit a structure in shorter time as compared to reconstruction and would have a less disruptive effect on the occupants of the building. However, incorporating provisions of relevant codes during construction of a building works out much cheaper than retrofitting a structurally inadequate buildings.

Strengthening generally does not limit itself to increasing the strength of deteriorated or damaged structural members, but also considers behavior of the entire structure. It may also be taken up specifically to improve the resistance of the buildings to disasters, like earthquakes. The seismic resistance of existing buildings, which do not meet seismic strength requirements of earthquake codes, in force, due to original structural inadequacies and material degradation due to time or alterations carried out during use over the years can be upgraded to the level of present day codes. Strengthening procedures aim at the following:

Various ways of conducting assessments of structures are as under:

Brief details of each of the methods are given below:

Study of Relevant Drawings and Documents

Discussion with Personnel and Study of Documents

Case Study: Assessment for Retrofitting of an Office Building in New Delhi

The author was part of a team that conducted an assessment of a large office complex in New Delhi. The details of the office building cannot be mentioned for contractual reasons but the assessment process, findings and recommendations will be described. The description seeks to demonstrate the application of assessment processes described above, the kind of structural deterioration that a building can undergo and the possible strengthening interventions that can be proposed in such cases.

The assessment team decided on the following methodology for the work:

The Complex
The office complex, consisted of five multi storied buildings constructed between 1962 and 1984.The building was highly vulnerable to earthquakes since the area, where it was located, has been marked as a high seismic hazard zone by Seismic Hazard Micro zonation map, published by Earthquake Risk Evaluation Centre, Indian Meteorological Department. One of the reasons for designating the area as a high hazard zone was due to liquefaction potential of the soil.

Visual Inspection of the Buildings

Issues
The following main issues were revealed during a visual inspection of the complex:

The visual inspection of the building was followed by the following tests.

Soil Test
Field penetration tests and liquefaction studies were carried out and the findings are:

Rebound Hammer Test
The test results reveal that the concrete in various structural elements of the building at different floor levels falls in M 10 & M 15 grade categories. However, at first floor level the grade of concrete in all structural elements falls in M 15 grade. Since 10 Nos. test results out of total 19 Nos. fall in M10 to M15 grade, keeping safety considerations in view, for structural analysis for seismic assessment of Main Building, the overall grade of concrete for RCC works can be considered as M12 grade.

Ultrasonic Pulse Velocity Test
Reviewing the test data, it is seen that the ultrasonic pulse velocity investigations carried out on foundation footing of column & various structural elements at different floor levels of the Main Building indicate that overall quality of concrete can be considered to fall in ‘Doubtful’ to ‘Medium’ category reflecting unsatisfactory workmanship with presence of likely internal deficiencies.

Concrete Strength
As per IS:456-2000, the concrete in the member represented by a core test shall be considered acceptable if the average equivalent cube strength of the cores is equal to at least 85 % of the cube strength of the grade of concrete specified for the corresponding age and no individual core has a strength less than 75 %. The concrete is seen to fall in M 10 to M15 grade.

Carbonation Test
The carbonation test was conducted on foundation footing of column & various RCC elements at all floor levels, & the depth of carbonation has been found to range from 20 mm to 80 mm. The tests have revealed that the carbonation has penetrated up to or beyond the reinforcement bars at most of the locations.

Half-cell Potential
The results of the half-cell potential survey indicate that the likelihood of corrosion of reinforcement at present in various structural members at different floor levels is varying from less than 10 % to more than 90%.

Cover Meter Test
There is no deficiency in depth of cover recorded as compared to the requirement of minimum concrete cover as per IS: 456-2000.

pH value, sulphate and chloride analysis
As per Clause 8.2.5.2 of IS:456-2000, for RCC containing embedded metal, max. total acid soluble chloride content expressed as Kg/m3 of concrete should not be more than 0.60. As such, all the test results in respect of chloride content are within permissible limit.
As mentioned earlier above tests were conducted on other buildings, including building 2 but have not been included to avoid repetition. However, considering the state of structural elements, test results and height of the buildings strengthening measures were proposed for buildings 1 & 2, which are given above. 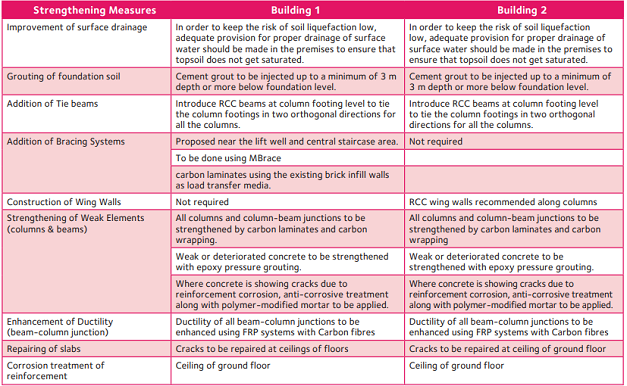 The following measures are presented as sample.

The building aesthetics may not be maintained because of resizing of columns and beams.

The building arrangement appears to be non-engineered and the seismic resistivity of the structure is doubtful.The extent of strengthening requirement for all the Buildings would be extremely high and would require almost strengthening from foundation to columns, beams & slabs, viz., strengthening of each structural member.
It is obvious from the above description of the building that it is highly vulnerable to earthquakes due to the following factors

The building would sustain heavy damage during a severe earthquake as strength of concrete is less than acceptable limit with medium to doubtful quality. Corrosion of reinforcement will also continue to increase as depth of carbonation is quite high. In addition to the deterioration the building has been constructed under old codes and needs to be upgraded to conform to present day codes and revised seismic zoning. In order to improve the resilience of the building. Structural members need to be treated in multiple ways which include removal of loose concrete, protection of existing reinforcement steel from corrosion, jacketing with concrete/steel/ carbon fibre reinforced polymer or a combination of these. The appropriate treatment would need to be decided on the basis of cost and structural design. The example also illustrates the extent of deterioration that can occur in a building if left unaddressed. The treatment to the structural members would not only be expensive but would also affect the functioning of occupants of the building. Thus timely assessment, repair and treatment of buildings is essential.