Anchoring is very useful technique for repair and rehabilitation as it provides adequate strength and helps in minimising generation of construction and demolition waste. Anchoring is also used in new works in many applications for fixing structural and non structural members.

Types Of Anchors
There are two types of anchors as

Mechanical anchors are categorised as expansion and non-expansion anchors. Those expansion anchors expanding by tightening are called torque expanding anchors such as stud anchors, shield anchors and sleeve anchors suitable for use in cracked and non-cracked concrete depending on the anchor type. Anchors expanded by the displacement of an expander plug are known as deformation controlled anchors, commonly used in overhead applications for the suspension of threaded rods to support mechanical and electrical systems.

Non expansion anchors include undercut and self tapping screw anchors. Undercut anchors are installed mainly by mechanical interlock provided by an undercut in the concrete.

Expansion anchors are generally unsuitable for use in weaker base materials such as brickwork and stonework as they are likely to crack or crush the brickwork/stonework during expansion of the anchors. Chemical anchors are suitable in such cases.

Chemical anchors are of capsule and injection resin type. The size of the stud or steel members in chemical anchoring is to be selected as per the design requirements. They are used with resins and mortars for the bond into drilled holes in concrete or masonry. The capsules contain a predetermined quantity of resin for predetermined drilled hole. Chemical anchoring is obtained through pre-packed injection resin systems containing two chemicals mixed in the nozzle.

Cleaning of hole is extremely essential in chemical anchoring as chemical anchors work on the principle of bondage between base material and chemicals though few producers claim to have developed the anchors that do not require cleaning of the hole. Chemical anchoring system also requires adequate curing time before they are loaded while mechanical anchors can be loaded almost immediately.

Applications Of Mechanical And Chemical Anchors
Mechanical anchoring system is used in various applications for light, medium and high loadings. These are also suitable in steel and RCC structures. Heavy duty anchors are used for heavy loadings both in non cracked and cracked concrete.

For repair and rehabilitation of distressed structures, selection of method and materials depends upon the type, conditions and importance of the structure and availability of the resources. For rehabilitation and seismic retrofitting, the following methods are normally adopted:

Judicious decision is to be taken on the method of rehabilitation or replacement of structural members. For example, fibre wrapping may be costly compared to jacketing but is quick, adding negligible thickness to the member and not requiring strengthening of the foundation. Plate bonding and jacketing are carried out in columns while fibre wrapping can also be taken up in other structural members. In case, jacketing is adopted, it has to be anchored to existing members and foundation to be checked for additional loads and strengthened, if required. Fibre wrapping is done using adhesives but in plate bonding or jacketing, anchors can be used.

Anchoring is also useful in rehabilitation of slab. Sometimes, “I” beams or similar arrangements are provided to support distressed slab and wire mesh is inserted above them. If wire mesh is not anchored to the slab, it has no unity to the slab and does not serve the purpose of strengthening or rehabilitation. For anchoring wire mesh in the slab, anchors with washers made of MS flats of sizes larger than aperture of the mesh can be used. Similar arrangement can be provided in RCC structures made from sections and anchored on RCC members for getting unity action of additional reinforcement with the existing member.

Mechanical anchors can be used in case of RCC and chemical anchors for masonry structures.

Case Studies
Two bungalows having old brick masonry were seismically retrofitted in Delhi using chemical anchors. Horizontal and vertical seismic belts with GI wire mesh as per IS 13935 were provided with vertical reinforcement in inner corners.

The seismic belts were anchored with the brickwork using chemical anchoring system. Stainless steel studs (Fig. 1) of size 8mm diameter having resistance against direct pull of 110 kN were used at a spacing of 600mm in a staggered way in mesh reinforcement (Fig. 2). A single washer of MS of size larger than the opening/aperture of the mesh was used on the wire mesh for anchoring. Chemical used was HY 50/310 in a ratio of 2:1 having resin and hardener. 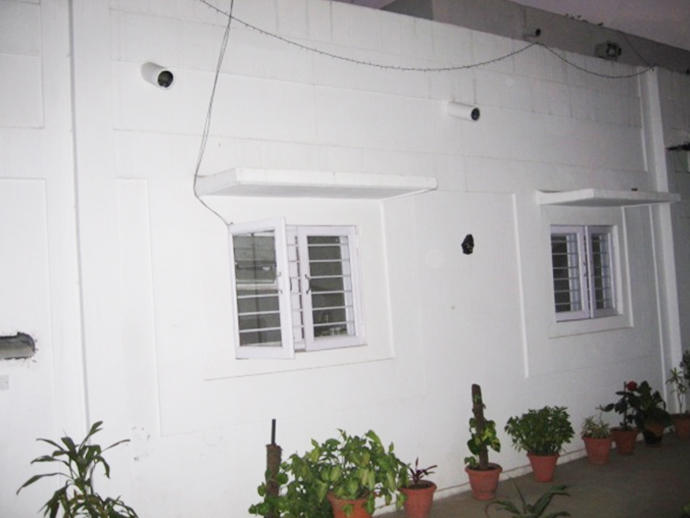 Other situations where anchors/fasteners can be used include fixing of grills over concrete blocks/RCC blocks/stonework/brickwork, fixing of railing in steps and parapet, fixing of members like chhajja, projections etc. Sometimes fixing new members is required in existing structural members like rope anchoring in existing buildings, fixing projections for cantilever porches, awnings, trusses etc where anchoring is very useful. In a similar situation, anchoring system was used to install the trusses. There is a need of IS code for specifications and design anchoring system to ensure the quality.

Conclusion
Anchoring has very important role in repair, rehabilitation and seismic retrofitting as it provides unity action required between existing structural member and new section to be added. Anchoring can also be used in applications where new members are to be added in existing structures with quality and safety.

Mechanical anchors are used in RCC structures while chemical anchors in load bearing structures. There is a need of IS code for design and installation of anchoring system.